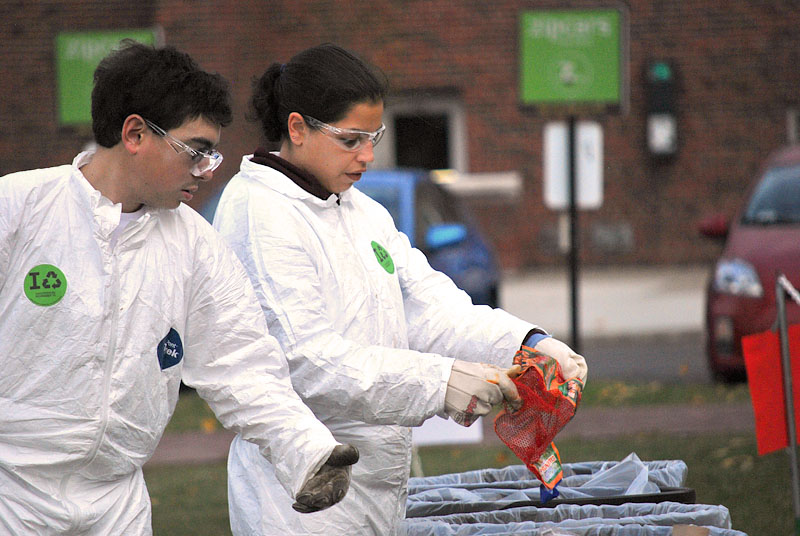 Which campus buildings are doing the best job of recycling and conserving resources?

This year’s Waste Stream Audit, which examined and assessed nearly 600 pounds of refuse from Higgins Labs and Morgan, Daniels, and Sanford Riley Halls, was conducted Nov. 15 (coinciding with America Recycles Day), and the results are in.

According to the Third Annual Waste Audit Report, the four buildings were scored based on a recycling rate determined by using a formula that divides total weight of correctly recycled waste by total weight of all waste and multiplies that number by 100.

Spearheaded by the WPI Student Green Team, an organization dedicated to increasing sustainability on campus, the Waste Audit was held from 8 am to 4 pm in front of Alumni Gym. At that time, the targeted buildings were not identified.

The report reveals an 8 percent increase in total post-sort waste from 2012. Trash, food, corrugated cardboard, cans/glass/plastic, water bottles, and Styrofoam exhibited an increase in weight, which the report suggests may be due to an increase in the population of the buildings or to higher per-capita consumption.

Among all categories, trash reigned as heavyweight champ, with a total of 210.4 pounds―up from 174 pounds in 2012―for the four buildings. Overall, trash consumption was up 25 percent from last year.

While recyclables weight was down from last year (240 pounds versus 252.2 pounds), all categories other than paper showed an increase. Decreased paper recycling is likely due to its diminished use over the past year.

“With the installation of water bottle filling stations around campus, we really expected to see a decrease in the number of disposable water bottles. That was not the case. A welcome surprise, however, was the decrease in the amount of paper disposed of.” She attributes the decrease to less printing of documents, utilizing double-sided printing options, and people generally getting more information digitally.

Among all categories,
trash reigned as
heavyweight champ

A key takeaway for Tomaszewski is that more effort needs to be put into educating the campus community about what should be recycled and how to do it. Making recycling more convenient should also be a priority.

“We need to get more peer-to-peer promotion and education, and we can certainly use our student and staff eco-reps to help. Moving to single-stream recycling, which is currently being considered as an option at WPI, would make recycling much more convenient,” she explains.

Single-stream recycling refers to a system in which all paper fibers, plastics, metals, and other containers are mixed in a collection truck, rather than being sorted by users. Materials are subsequently separated for reuse at a materials recovery facility.

Tomaszewski praised the audit and all who contributed to it. She adds that the day was both educational and fun, and presented a good opportunity to get students and staff to work together on a project that allowed them to see firsthand what the university’s waste stream looks like. She admits, however, to having mixed feelings about the results.

“Our average recycling rate was nearly 30 percent, which is better than our 2012 yearly average of around 25 percent. But we still saw so many areas where improvement is needed. There are too many recyclables that are disposed of with the trash, and we just throw too much away,” she says.

While the event was a success, it did not go off exactly as planned. Atwater Kent and the Campus Center were initially included, but through a miscommunication, trash was inadvertently picked up at those buildings just prior to the audit.

The full report can be viewed HERE