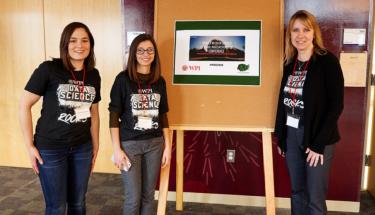 On March 5 WPI hosted a regional gathering of the global Women in Data Science Conference (WiDS). With more than 100,000 people participating at more than 100 locations worldwide, WiDS is considered the largest analytics conference in the world.

WPI’s event, the Women in Data Science Central Massachusetts Conference, had a full house with more than 200 participants, organizers said. The conference aims “to inspire and educate data scientists worldwide, regardless of gender, and support women in the field.” Graduate and undergraduate students came from WPI, UMass Amherst, Smith, Mount Holyoke, Brown University, and Becker; representatives from various companies, including the industry sponsor Dassault Systems, attended. And in a nod to the pipeline importance of this kind of conference, a group of high school students also attended to learn more about data science as a career.

A list of poster presenters can been seen here.

Caitlin Kuhlman, a graduate student studying computer science and one of the event organizers (called a WiDS ambassador), says the WiDS conferences offer opportunities to establish connections and support in the field. “Personally, this was a chance to pay forward some of the experiences I have had entering the field of computer science as a woman making a career change,” she says. “I have found a strong network of peers and mentors to be invaluable. I think seeing people you can identify with in leading roles is one of the best motivators for students and early career professionals.” Terri Camesano, professor and dean of graduate studies, takes a selfie with participants behind her. WiDS organizers say the connections inspired an excitement for the field and continued to elevate the work data scientists do. Director of Data Science Elke Rundensteiner shares a light moment with the audience. The day included a panel discussion with professionals from diverse data science paths and backgrounds discussing the career options and giving advice for those early in their careers.

Students presented posters on topics as diverse as …

“Hosting a regional event at WPI was an opportunity to take part in a global movement, and increase the visibility of the many women in our area who are contributing to this emerging field.” —Caitlin Kuhlman, WPI graduate student in computer science and a conference organizer

Holding the conference at WPI was fitting, said the organizers. “WPI is a pioneer in data science, with one of the first data science graduate programs in the country,” says WiDS ambassador Cansu Sen, a graduate student studying computer science. “We thought WPI has to be one of the institutions offering a regional WiDS event and showcase all the data science talent we have here at the university. I think it’s a very valuable task to give a platform to all the women in this field to get to know each other, inspire from each other, and know that they are not alone or are a minority.”

“The thing that pleased me most is that this really was more than a conference,” says Melanie Jutras, graduate student in data science and a WiDS ambassador. “As we were told early on by the Stanford organizers, this is a ‘movement.’ After experiencing our event, I can say that I agree and many of our attendees expressed the same.”

Jutras also expressed surprise at how much the conference strengthened connections. She and other students at WPI offered their help, including Ramoza Ahsan, Allison Rozet, Wen Liu, Jidapa Thadajarassiri, and Nicole Jutras. “I think the activities surrounding the planning of the event were part of that collaboration, and that was unexpected,” says Melanie Jutras. “We got to know each other and worked together with this common goal.”