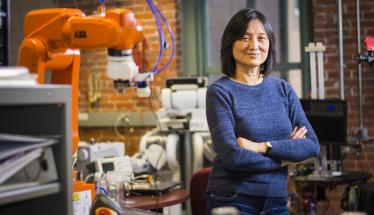 Set to lead WPI into a future of creating robotics designers, builders, and users

Jing Xiao, new director of the Robotics Engineering Program, talks about what inspires her, what’s next in robotics, and how to deal with growing fears about artificial intelligence. Having come to WPI from the University of North Carolina at Charlotte in January, Xiao is just the second director of the university’s robotics program, which was launched in 2007.

As a former program director for the National Science Foundation’s Robotics and Human Augmentation Program, Xiao has been conducting critical research in robotics as well as in haptics, the science of enabling machines to feel or communicate through touch.

She is getting settled at the program’s post at 85 Prescott St., helping design her new robotics lab, looking to hire additional faculty, and planning the future of an expanding robotics program at WPI. In this sit-down interview, she focuses on robots’ growing relationship with humans, overcoming research bottlenecks, and making robots fit into homes, communities, and society. 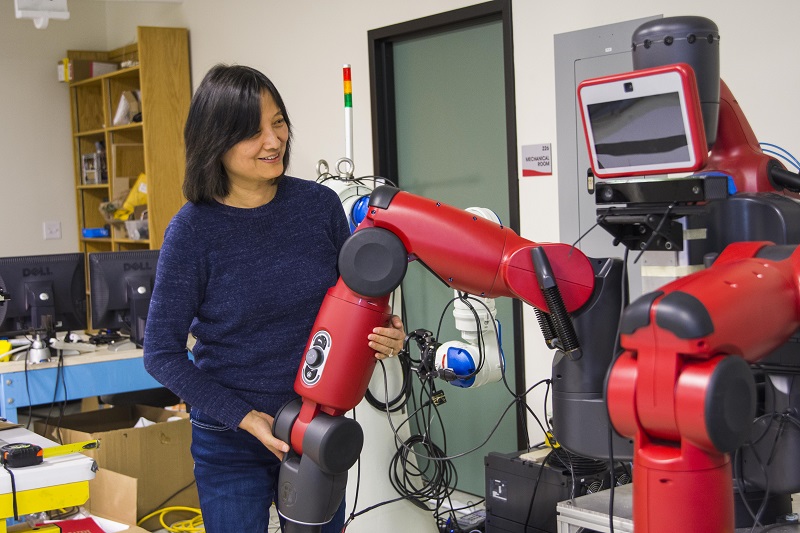 Why did you get into robotics?

I started by doing some database research, but found that I really wasn’t that into it. Then I heard about a robotics lab at the University of Michigan, where I was studying back in the mid-1980s. A professor posted an advertisement for a research assistant. I always liked the idea of artificial intelligence, and robotics is about an intelligent machine or artificial being with physical capabilities. With robotics, it’s not just an artificial brain but a physical embodiment of that intelligence.

Is the robotics industry today where you thought it would be when you started in the field 30 years ago?

In terms of research, we’ve certainly accomplished a lot, but to transition the technology to everyday life, we still have a long way to go. We have a lot of promising prototypes, but we really need to get robots out there in human-centered environments to assist people in all sorts of physical tasks. We need more research to get there, and we need more technology transfer to get there. It’s not just about doing something in the lab. A robot system in the lab can be very fragile, so it’s not robust enough to function in the real world. We need to be able to turn that lab result into a practical product.

What are the biggest strides roboticists have made so far?

Algorithms and mechanisms. Certainly there have been a lot of new and more feasible work than we had 30 years ago. Algorithms for intelligent robot motion have come a long way. And that’s coupled with advances in sensing and perception technologies—vision sensing and depth sensing, for instance—and in computing power. The combination is very useful for robotics.

What do you think about the progress so far?

In 2018 we have laundry-folding robots in the lab but not in our homes yet. Thirty years ago, robotics was just about factory automation. I didn’t even think about robotics in the home back then. But by the late ’90s I started to realize the vision of personal robotics, having robots in everyday life. It was like the progression of computers. Computers used to only be in big warehouses, and then the personal computer revolution brought them into our homes. Now they’re everywhere. Today, we’re looking at the concept of human-centered robotics—robots entering your everyday life and taking different shapes, like an intelligent chair or an intelligent bed.

What's the next milestone you think we’ll hit with robotic advancements?

The next will be robots working with people. It will no longer be about robots just working in a fenced-in area. They’ll be working and interacting with humans. A robot might be serving an elderly person, or working side-by-side with people in a factory instead of off by itself. That’s the co-robot concept. It’s really hard to say how far away that will be. We have a lot of the components for this, but it’s about putting them all together to work in a concerted way.

"We have a very talented and hard-working group of faculty and terrific students ... This program really has great ingredients—from an undergrad program to a PhD in robotics—and this kind of scope is relatively rare." -Jing Xiao

What will it take to get to that point?

In order for a robot to serve people, the social interaction is important. A robot will need to be able to communicate with a human supervisor in a human-friendly fashion. We’ll need contributions from social sciences to get robots to that point. We have made progress but we don’t have that general capability yet.

There has been discussion, even from the likes of high-tech entrepreneur Elon Musk and physicist Stephen Hawking, that there is a lot to fear from artificial intelligence and robotics. What do you think about that?

Artificially intelligent systems already are smarter than humans in some things, like analyzing vast amount of data or playing games like Go. But it’s different, physically, for robots. We are trying to make robots that will not be threatening to people physically so they can co-exist with people and be controlled by people. Because people have concerns, that should make researchers more mindful about being responsible for human well-being. Scientists are increasingly thinking about that. It’s a major area of robotics ethics. We want robots to be ultimately helpful to people.

How long before we have robots doing more than vacuuming in our homes?

Within five years we could get robots that can do specific tasks, but not one robot that can do all kinds of tasks. Not yet. We’ll have telepresence robots monitor patients' or elderly people’s physical or mental state and report back to caregivers who cannot be available physically. That’s actually not very far away at all. They are becoming available.

What excites you about your new role here at WPI?

We have a very talented and hard-working group of faculty and terrific students. We all want to make this a leading robotics program nationwide and worldwide. We think we have a lot of potential to develop the program in many ways, in terms of research and in terms of training the next generation of robotics designers, builders, and users. This program really has great ingredients—from an undergrad program to a PhD in robotics—and this kind of scope is relatively rare.

What's the focus of your own research?

Do you see WPI becoming an even bigger player in the robotics world?

Oh, yes. I can see the potential, although there are also challenges. So it’s up to us, all of us at WPI, to get there. We’ve already performed very impressively in robotics. We want to maintain and extend the leading edge.