President Laurie Leshin welcomed the gathering with reflections on the shared history of WPI and NSRDEC. 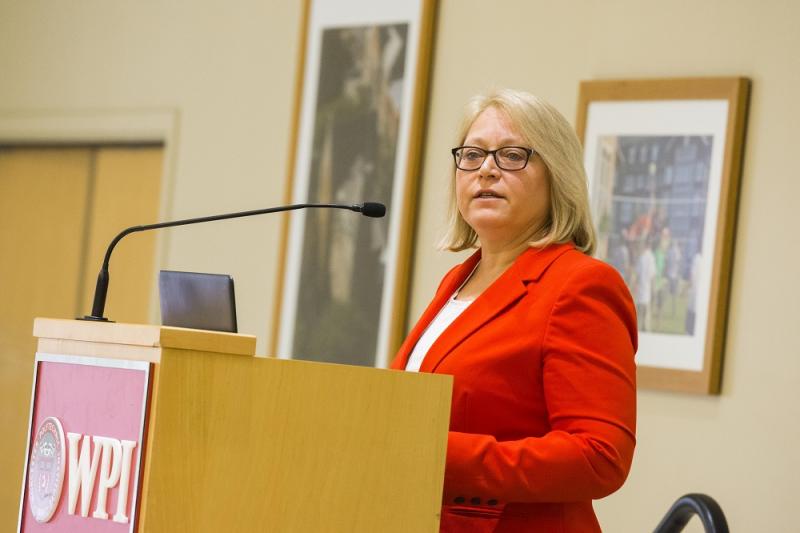 Charlene Mello, chief scientist at NSRDEC, said
bringing scientists and engineers from both organizations
into one area to discuss their research leads to new ideas.

“For the past several decades, WPI has had a strong and meaningful relationship with Natick Labs,” she said. “Whether it’s collaborating on fire protection engineering research, conducting dozens of student projects, facilitating on-site graduate degree programs, or providing a pipeline of talent, we’re so very pleased to help Natick Labs solve an important real-world problem: optimizing the performance of soldiers on the battlefield.”

In 2016 WPI and NSRDEC established a master Cooperative Research and Development Agreement (CRADA) to allow the exchange of information and facilitate collaborations. A year later, an Education Partnership Agreement (EPA) helped cultivate the ongoing relationship. As Bogdan Vernescu, vice provost for research, remarked, WPI's growth and expansion has increased the amount and complexity of WPI's research and offers even greater opportunity. Research centers on campus have expanded, including the new Practice Point and the AIM Photonics Lab, while NSRDEC has several distinctive labs including climatic chambers and a 3-D laser scanning lab capable of 3-D body scans.

The symposium held two open poster presentation sessions (with approximately 35 presenters from each organization), which gave researchers a chance to freely ask questions and seek out potential collaborations. Charlene Mello, chief scientist at NSRDEC, said bringing scientists and engineers from both organizations into one area to discuss their research leads to new ideas. “What’s exciting to me is what’s happening right here,” she said. “You can hear the buzz and feel the energy as people exchange ideas and are co-creating new solutions to problems.”

The research solves problems that are immediate and those that aren’t so tangible. “Bringing extra brainpower and more research capabilities to Natick allows them to complete their mission,” said John Beatty, executive director of the Mass Military Asset and Security Strategy Task Force of Mass Development. “They are able to get better solutions into the hands of our soldiers. But the other part of it is building the talent pipeline. How do we inspire young students to pursue STEM but also to commit to some kind of government service and to put their brainpower to use for our national defense? They will never know this is an option unless someone exposes them to it.” 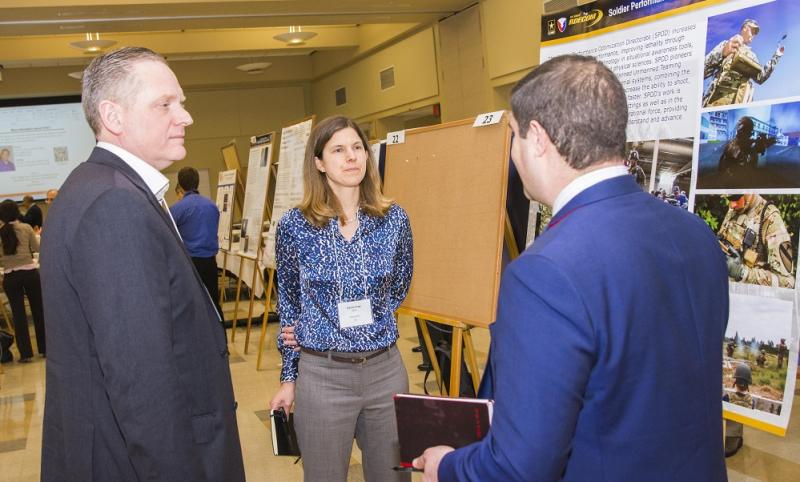 Associate professor of biomedical engineering Karen
Troy, center, one of the symposium organizers, listens
to presenters from the Natick Labs.

While WPI and NSRDEC have distinct goals, Mello said their strengths are similar. “Clearly, our missions are quite different,” she said. “But we are looking for smart technology solutions to real-world problems. WPI’s curriculum centers around that.”

Successful collaborations between WPI and NSRDEC have already produced working products including a cooling vest and a containerized kitchen. And, according to Mello, WPI alums make up 10 percent of NSRDEC’s scientific workforce.

The researchers in attendance found the day presented new opportunities. Ann Barrett, a senior food engineer at NSRDEC, is an expert in combat rations, and through the poster presentations had already identified WPI researchers she would like to explore collaborations with. Barrett’s research, “Sonic Compression of Calorically Dense Foodstuffs,” focuses on creating nutrient-dense, appealing combat rations (such as bruschetta or chili con carne) that are stable in extreme conditions (100 degrees for six months). “Soldiers have to carry lots of food with them,” she said, and they depend on what they carry to give them nutrition and energy and be easy to eat in the field. She was excited to see WPI’s research in the Center for Advanced Research in Drying and wants to explore that avenue.

Carlo Pinciroli, assistant professor of robotics engineering at WPI, says the symposium revealed new ideas he hadn’t considered before. As a specialist in swarm robotics, Pinciroli plans to connect with NSRDEC teams that specialize in air drop technology. “Air drop is interesting because wind messes up everything,” he said. If a swarm of robots is set to deploy in one location (for detection of chemical or biological hazards, for example), a wind gust can sweep them from the target location. “I hadn’t thought about that problem,” Pinciroli said and was anticipating exploring the idea further.

As a poster presenter, Shadi Kalat, a PhD student in mechanical engineering at WPI, discussed how her research “Energy-Aware, Online Planning for Long-Term Multi-Robot Missions” could help the Army. “This is about solving an optimization problem,” she said. “It helps plan an optimal path for robots.” Her research uses a family of prefactal curves to help robotic swarms operate most efficiently. She hopes NSRDEC researchers will find her research useful for robots in monitoring the environment soldiers are in.

Vernescu said the day’s positive outcome was apparent. “The symposium has visibly energized the over 80 researchers in attendance,” he said, “and we expect that the discussions generated will bring our long-standing collaboration to a new level.”