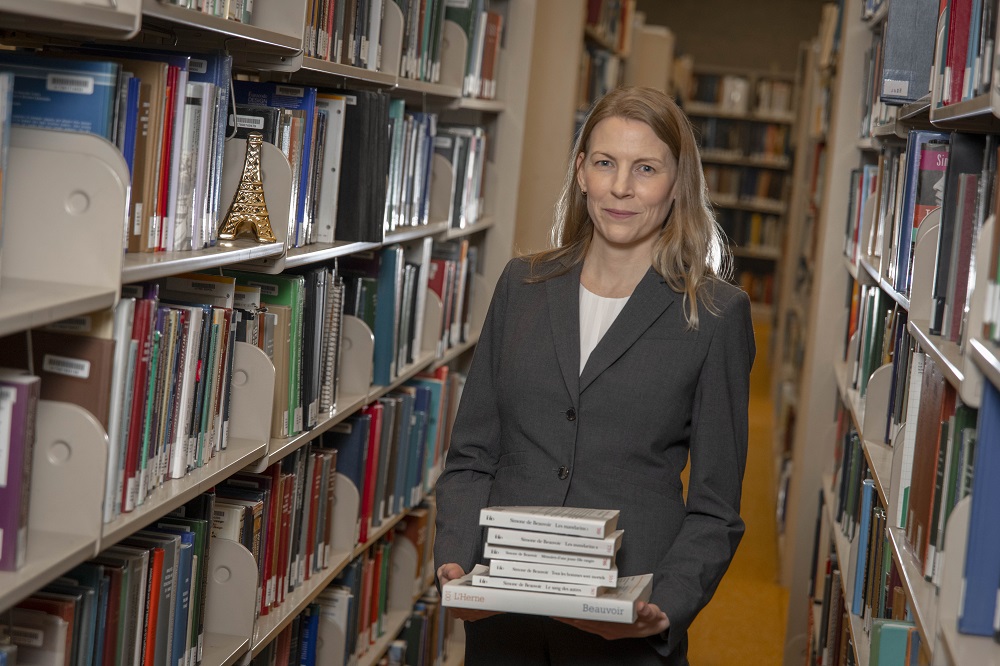 McWeeny, whose work focuses on theories of consciousness and gender, will research the co-evolution of the philosophies of two iconic French thinkers, Simone de Beauvoir and Maurice Merleau-Ponty. She will work at the École Normale Supérieure, long considered one of the most selective and esteemed institutions in France, and said that immersing herself in French academia will give her a better idea of how the French interpret the work of Beauvoir and Merleau-Ponty.

“In France, Simone de Beauvoir is not usually regarded as a philosopher like she is in the U.S. academy,” McWeeny said. “The French are more apt to emphasize her fiction and memoirs, her literary contributions. However, her philosophy is gaining more attention in France, especially with today’s political landscape.”

Beauvoir, who had a major influence on the development of French existentialism and feminist theory, is famous for her book, The Second Sex, which analyzes the history and consequences of oppression against women, and for her lifelong and unconventional relationship with French philosopher Jean-Paul Sartre. McWeeny plans to dedicate her work to demonstrate that, contrary to common opinion at the time, Beauvoir “wasn’t just Sartre’s lover or advocate. She was an original thinker ahead of her time.”

McWeeny’s research specifically investigates the intersections of Beauvoir’s philosophy and that of another of her intellectual companions, Maurice Merleau-Ponty. The two thinkers were friends for more than 30 years, and often published work that had overlapping ideas and themes. McWeeny said this comparison is important because no one has yet viewed their work side by side in a book-length study, and doing so will help illustrate the complexity and depth of Beauvoir’s thinking.

It will also demonstrate that Beauvoir’s work stands on its own philosophically and was not just an echo of either Sartre’s or Merleau-Ponty’s ideas.

“Often Merleau-Ponty’s insights about perception and the body are generalized to apply to all people universally, but Beauvoir’s phenomenological theories are politicized and seen as only applying to women or certain types of women,” she said. “My research will explore such differences in the reception of their ideas.”

McWeeny plans to compile her findings into an academic book, and infuse the knowledge she gains into her classes at WPI. Her research will also inform her new role as Editor-in-Chief of the international journal dedicated to Beauvoir’s legacy, called Simone de Beauvoir Studies, which will relaunch in June 2019. The peer-reviewed journal, which was on hiatus following the retirement of the previous Editor-in-chief, is bilingual and multidisciplinary, and features a wide variety of contributions, from scholarly writings on Beauvoir’s work to creative pieces, such as plays and fiction. Since she was appointed Editor-in-Chief, McWeeny has been working to heighten and broaden the journal’s reputation, and edit it in a way that is similar to how Beauvoir edited Les Temps Modernes, the journal she founded with Sartre in 1945.

McWeeny is the 20th faculty member to receive a Fulbright Award in WPI’s history, and the fifth professor of Humanities & Arts at the university to receive it.

McWeeny said she feels especially honored to receive this Fulbright because the field of philosophy in the U.S. is composed of less than 20 percent women, although “this number is an improvement from where the profession was twenty years ago,” she said. “Plus, it’s tough for philosophers to receive a Fulbright Award to France. My work was measured against scholars from all disciplines, including those in the humanities, arts, sciences, social sciences, business, and engineering.”

“I can’t wait to immerse myself in French culture, and try to imagine what it was like to see it through Beauvoir’s and Merleau-Ponty’s eyes, what it was like to be a philosopher in France in the 1940s and '50s,” McWeeny said. “They are some of the most brilliant minds of the twentieth century and their ideas, forged in the aftermath of World War II, hold much promise for helping us to navigate our contemporary global landscape in positive ways.”