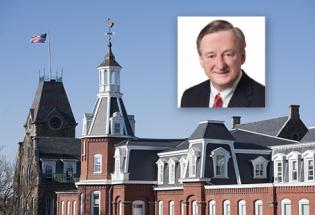 Retired human resources executive has served on the board since 2007 and succeeds Phil Ryan ’65.  Also appointed to the Board are Carl Kilmer ’64, Joyce Kline ’87,and Marni Hall ’97
Media Contact
Alison M Duffy
Executive Director of Strategic Communications
Marketing Communications
+1 (508) 8316656
media@wpi.edu

Worcester Polytechnic Institute (WPI) has named John T. (Jack) Mollen, retired executive vice president of human resources at EMC Corporation, chair of the university’s Board of Trustees. Mollen, a member of the board since 2007 and chair of the board’s Compensation Committee, succeeds Phil Ryan, who served as chair since 2012.

As leader of human resources operations at EMC from 1999 until his retirement in 2013, Mollen was responsible for executive, leadership, and employee development; compensation and benefits; staffing; and all “people-related” aspects of acquisition integration for EMC, a multi-billion-dollar global leader in computer data storage.

“At EMC, I saw first-hand that WPI graduates enter the workforce with superior skills and an ability to very quickly have a profound impact on the company,” said Mollen. “Year after year I was so impressed with the quality of the graduates and their creative, confident approach to problem solving that I wanted to personally become involved with an institution that fosters such student engagement and development. It’s exciting, and an honor, for me to work with the university leadership as its Board Chair.”

“I am delighted to work alongside Jack Mollen and our board as stewards of this remarkable university,” said WPI President Laurie Leshin. “Jack has proven himself a thoughtful and insightful colleague who recognizes the profound impact WPI’s unique project-based education has not only on each student, but on the world they inhabit. He is a champion of the institution’s local, regional, and global partnerships for education, research, innovation, outreach, and development, and under his leadership we are poised to excel.”

Prior to his role at EMC, Mollen was vice president of Citigroup’s 80,000-person global operations and technology organization, serving a key function in employee integration following the 1998 merger of Citicorp and Travelers Group, Inc. Before joining Citigroup, he held a number of positions with Harris Corp., where as Vice President of Administration he was responsible for IS, quality, engineering services, human resources, mergers and acquisitions, facilities, and security for the company's 12,000-person Electronic Systems sector.

In addition to his work in human resources, Mollen is also an advisory board member for Working Mother magazine, which promotes opportunity for women in business. His community involvement includes service on the board of directors of the United Way of Tri-County in Massachusetts and as a trustee of Angel Flight New England, which provides free flights throughout the northeast for patients needing to access medical care.  Mollen holds a degree in economics from St. John Fisher College in Rochester, New York, and a master's degree in labor relations from St. Francis College in Pennsylvania.

“I know the entire university community joins me in thanking Phil for his brilliant leadership and his true devotion to this institution and its students, alumni, and families,’ said Leshin. ‘I am personally grateful to Phil for his guidance, and I know I could not have asked for a finer person to help me assume my role as WPI president. I look forward to working as closely with Jack in the coming years.”

WPI also announced the appointment of Carl Kilmer ’64, Joyce Kline ’87, and Marni Hall ’97, to the board.

Kilmer served on the WPI board from 1999 to 2006. He worked with Accenture for many years, serving in a number of capacities, including worldwide managing partner for aerospace and defense, industrial products, and automotive. In 1979 he was named senior partner for electronics and high technology. Kilmer received the Robert H. Goddard Alumni Award for Outstanding Professional Achievement in 1999. From 2009 to 2015, he was a trustee and board member of Babson College, where he received his MBA in 1969.

Joyce Kline, a Managing Director in Accenture’s Digital practice, was formerly President of the WPI Alumni Association. As an alumni volunteer, she oversaw reunion and fundraiser planning and was a member of the Annual Fund Board and other alumni groups. In 2002, Joyce received the John Boynton Young Alumni Award for Service to WPI, a recognition of her dedication to the institution and its societies and clubs. Kline also received the Herbert F. Taylor Award for Distinguished Service in 2012. In addition to her WPI mechanical engineering degree, she has an MBA from the MIT Sloan School of Management.

Marni Hall is Senior Vice President of Research and Development, Informatics and Policy at PatientsLikeMe, a patient network that improves lives and a research platform that advances medicine. She previously worked with the Food and Drug Administration as a director of regulatory science within the Office of Surveillance and Epidemiology for the FDA Center for Drug Evaluation and Research. Hall received her bachelor of science degree in chemistry and in society, technology, and policy from WPI, a master’s degree in public health from Columbia University’s Mailman School of Public Health, and a master of science degree in biochemistry and a PhD in toxicology from Columbia University’s Graduate School of Arts and Sciences.