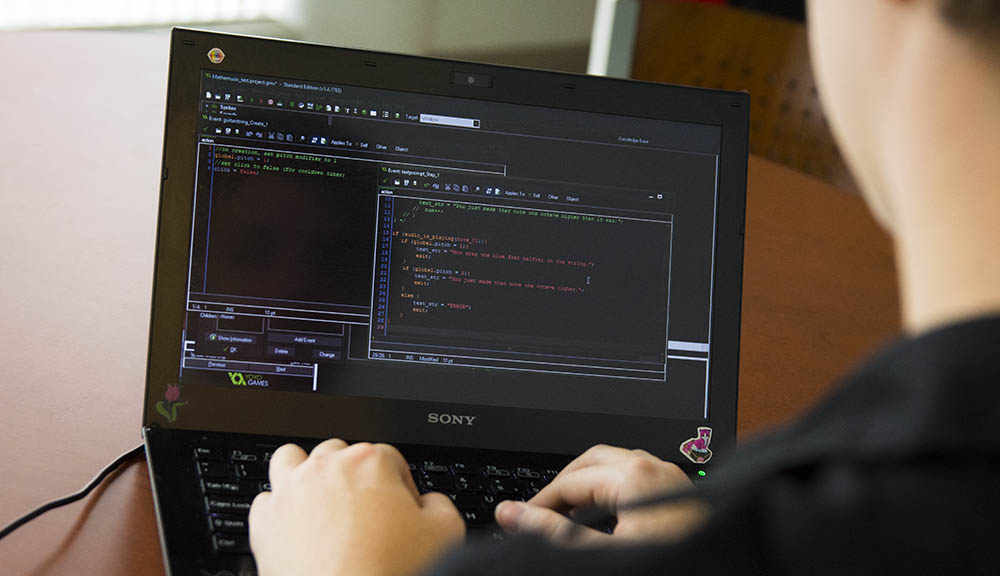 Rachel Burton loves seeing kids get inspired by creating video games so much that the 20-year-old senior from New Hampshire decided to start her own workshop for high school students in the city.

It's the only game design workshop in the area for kids, Burton says. She and Becker College student Rejon Taylor-Foster set up a lab for the free workshop at the Worcester Public Library. It will run Fridays from 3 to 5 p.m. through Nov. 18.

The program is open to anyone, she says, but in a field mostly dominated by men, she is hoping more girls become interested this year. Burton ran the program last year with the help of Rachel Moir, one of the teen librarians.

Most of the participants were boys, Burton points out. “There were also a lot of students of color, which was interesting for me and good to see. I’m from a primarily white part of the country where there is not a lot of diversity. It is not surprising in Worcester, such a diverse city, and it is nice to see everyone interested and excited. The more diverse the creators, the more diverse the audience. It lets more people enjoy this media.”

Creating games is powerful, she says, because you are able to reach people in a unique way. “It's not just cool,” Burton says. “It is something people can interact with. I think that makes it special.”

Burton and Taylor-Foster co-teach the basics of programming and game development using the free GameMaker: Studio by YoYo Games.

“We also go into sprites and animation using the engine's built-in sprite editor,” she explains. “The goal of the course is that the students would be able to take what they learn and go off on their own to make games. The instruction usually goes a little deeper than just showing them how to program because we want these students to understand why a computer does what it does as well as how to get it to do what you want.”

She says they do their best to make the course as accessible as possible, using only free software, and they are working with the Worcester Public Library to get the software on some of their computers so that students without computers at home can make games.

It's no surprise with her enthusiasm for game design that she ended up at WPI.

“When I was applying to schools, WPI was one of the only schools with a game development program,” she recalls. “I went into it wanting to do game development and it just clicked one day that I can do this as a job and others could love what I make.”

WPI’s global projects program didn’t hurt with her decision to choose WPI, either. Last year she traveled to Paraguay to work on improving the tourism industry in a small town there, she says.

“WPI has a robust study abroad program,” she says. “It was the cherry on top and I fell in love with the campus. I did the tour and said, ‘I could see myself going here for four years.’”

Additionally, through the Massachusetts Digital Games Institute (MassDigI) Summer Innovation Program—an 11-week program that runs over the summer at Becker College—she was part of a game-making team that competed with others from around the world.

“It was my first experience making a game from start to almost finish,” she says. “I was the producer and one of the artists. I learned so much from the lead artist, programmers, and game designers. It was a crazy cool experience.”

Her game, Ophidia, is an artistic action game featuring the Ouroboros, an ancient symbol depicting a serpent eating its own tail. Published by MassDiGI, it has over 70,000 downloads and is available on the Google Play store for free and on itch.io.