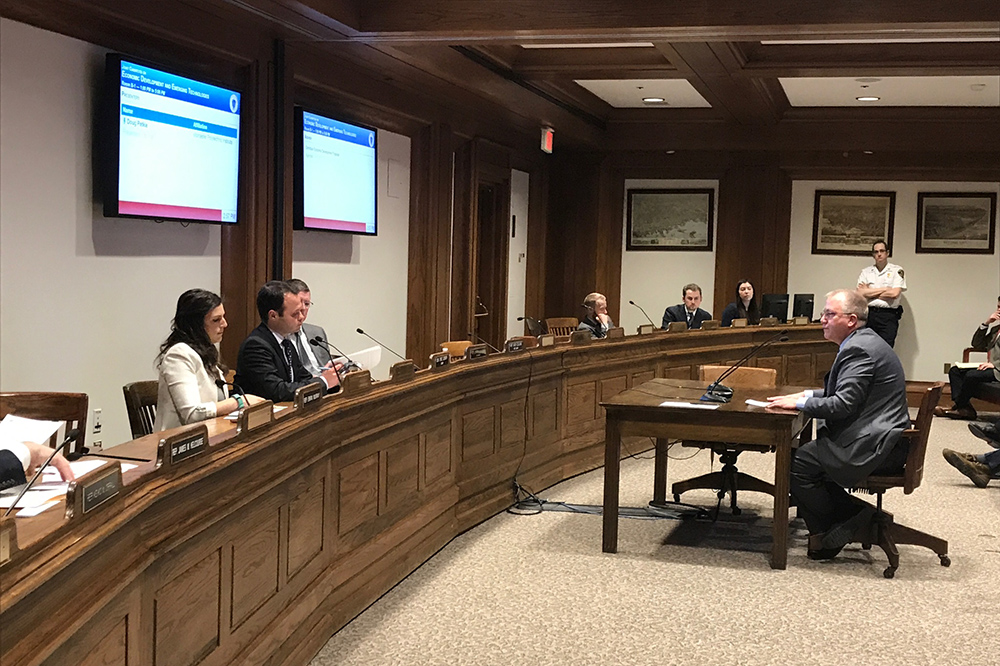 Worcester Polytechnic Institute (WPI) professor Doug Petkie on Tuesday testified before a joint committee at the State House in support of legislation that authorizes an additional $25 million for advanced manufacturing programs.

“The investments made in the development of an integrated photonics ecosystem deserves continued support that will very soon begin to benefit the commonwealth with new jobs, new companies, and new technologies,” said Petkie, who is also the head of the WPI physics department.

known as the AIM Photonics Academy Lab for Education & Application Prototypes (LEAP),  which will support the growth of the nascent integrated photonics industry across the Northeast. The lab will also provide training and education to help build a skilled integrated photonics workforce in Central Massachusetts.

Petkie told the joint committee that the funding will strengthen companies in the region by enabling their transition into the integrated photonics supply chain; supporting the creation of workforce development, retraining, and educational programs; expanding opportunities for research and development; and enabling new entrepreneurial activities.

“WPI and QCC are working closely with MIT, home to the education, workforce development, and road mapping arm of AIM Photonics,” said Petkie, who serves as the WPI lead for LEAP.

M2I2 is a program under the Massachusetts Technology Collaborative, a public agency that supports the state’s innovation economy. In 2016, the Commonwealth of Massachusetts authorized $71 million for the M2I2 program. The proposed $25 million will bring total authorizations close to $100 million, helping to boost research and development efforts statewide.

M2I2 provides funding and cost-sharing as part of the state’s ongoing commitment to the Manufacturing USA program, a public-private partnership that brings together industry, academia, and federal agencies to increase manufacturing competitiveness in the United States.

Last year, WPI announced it was named a member of eight of the 14 institutes that fall under Manufacturing USA. Petkie also serves as the WPI lead for the AIM Photonics institute on campus.

The M2I2 effort seeks to “advance innovations and job growth within the state through cross-collaboration among companies, universities, national labs, government, incubators, accelerators, and other academic and training institutions.

On March 9, Gov. Baker filed a $610 million economic development legislative package titled “An Act Enhancing Opportunities for All.” According to a press release issued by the governor’s office, $25 million of the proposed amount would “…build on the tremendous success of our (M2I2) and provide matching grants to institutions of higher education across the commonwealth to collaborate with private industry around emerging manufacturing technologies.”

Petkie joined several other leaders who testified in favor of the M2I2 program, including Michael Watts, CEO of Analog Photonics and a professor at MIT, and Cheryl Gomes, technical program manager at the University of Massachusetts Lowell for HEROES (Harnessing Emerging Opportunities to Empower Soldiers). Jay Ash, secretary of Housing and Economic Development for the Commonwealth of Massachusetts, testified on behalf of the Baker-Polito administration in support of the legislation.