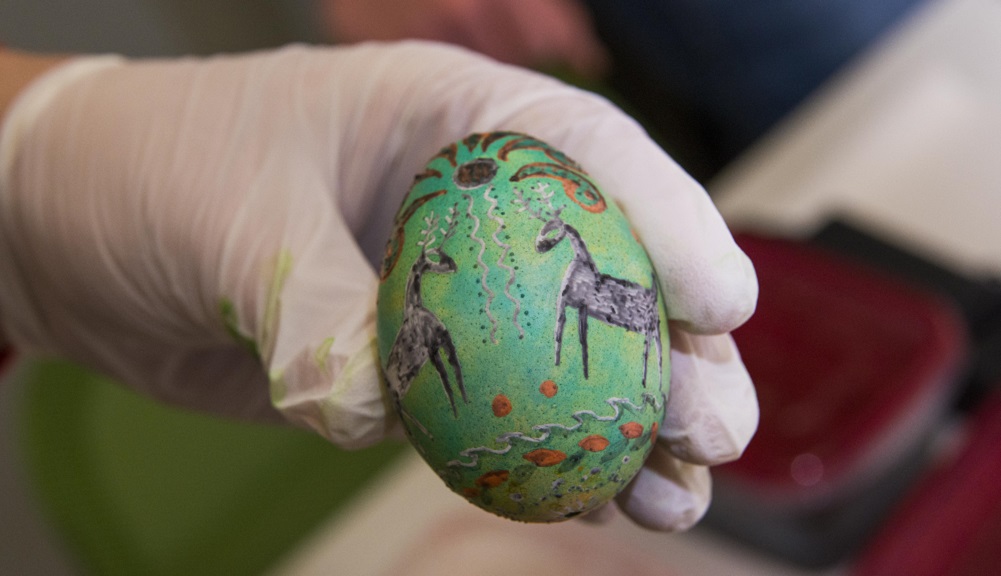 In a family of six siblings, Karen Royer grew up with the tradition of making pysanky, or Ukrainian eggs, around Easter. With the holiday right around the corner, she thought she’d share her roots in the classroom, so she brought in eggs and dye, and invited some colleagues to join her.

Her faculty advisors had something more than celebrating Easter in mind--how could Royer use pysanky to encourage students to think more creatively while developing games?

Now, creating pysanky is part of her independent study as a graduate student at WPI.

“I have a passion to share this craft,” says Royer, who is earning a master’s degree in Serious Games as part of the Interactive Media and Game Development (IMGD) program. “There’s no right or wrong way to do this.”

Her thesis is geared toward showing how people of all backgrounds are creative, even if those people don’t believe they possess a crafty side. She is teaching classes to students on campus through D-Term on how to create pysanky, which entails piercing the bottom of a live egg, blowing out the yolk, and using careful measuring tactics along with wax and dye to draw traditional Ukrainian pagan symbols on the shell. In some cases, Royer and her students have experimented with the designs. For example, one student crafted his egg to showcase symbols from a video game; for a handful of her eggs, Royer passed up pencils and picked up an air-cooled drill to carve shapes into the shell.

“Craft practices, like making pysanky, foreground human creative expression, social interactions, and storytelling,” says Gillian Smith, assistant professor of computer science, who also advises Royer’s work. “Crafters often use the language of play to describe experimentation in their process—we 'play' with new materials and technologies, or 'play' with color and design options. So crafts have a lot in common with games, and I’m excited about Karen’s project because it can help us push the expressive boundaries for computational technologies, games, and crafts.”

Each of Royer’s weekly classes covers something different in the pysanky-to-game process; one week, she covered traditional pysanky making. In another, she asked students to brainstorm different ways in which eggs have been used in games in the past, and what some new ways might be.

"For example, the Atari game Adventure was best known for using the term 'Easter eggs' in video games,” she explains. [In the past], "game developers weren’t given the opportunity to credit their work," she says. "Growing from the hacker mentality to ‘breaking into a game,’ game designer Warren Robinett began leaving hidden messages behind for other hackers to find.”

While developing paper prototypes for these egg-based games is the next step in her classes, she is also working with HoloLens technology to create patterns to put on the eggs. Royer, who owns a HoloLens, has suggested an app that would enable the player to reproduce a holographic, AI-based design using the vocabulary of the pysanky symbols. Players would complete their eggs by tracing the holographic image onto their eggs.

Aside from making her graduate work come to life, Royer says there’s a deeper importance to combining pysanky with technology-based games. “It returns you to an appreciation of craft,” she says. “You’re collaborating with a machine to make this happen.”

Jennifer deWinter, director of IMGD, says Royer’s project delves into the possibility of human creativity and expression in longer, and often feminized, traditions of art, technology, and community.

“Crafts are part of a larger movement in the U.S. where highly technical people are looking for community and authentic expressions that see hands and humans in the process,” she says. “Think craft beer, small-scale farms, hobby wineries, quilting competitions, and now—increasingly—computational expressions within craft. I think, as we look at technologies, we need to embody those technologies firmly in the human again.”

But, whether or not technology is used in her work, Royer says one of the best parts of making pysanky is the final product: a beautiful piece of art.

“The feeling during the reveal at the end when you pull the wax off ..." she says, "there’s nothing like it!”

See Firsthand What it Takes to Make Pysanky