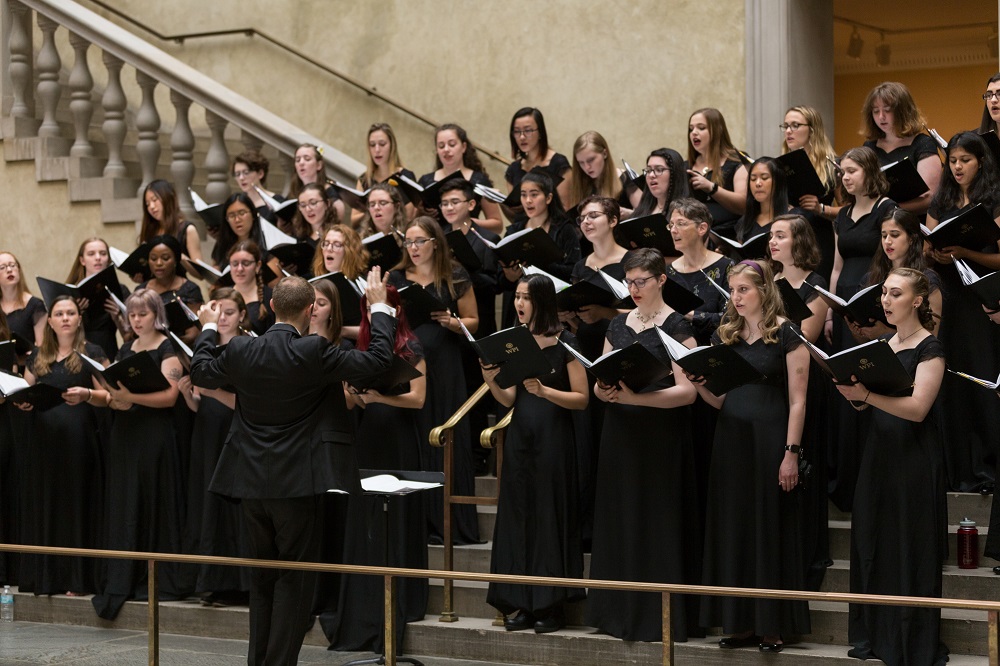 Performances featured the works of female composers and artists

WPI’s choruses were a crucial element of a multisensory experience at Worcester Art Museum (WAM) on March 1. The private event combined the museum’s visual masterpieces with music, via unique, themed performances.

The event served other important purposes as well. It put women composers—not to mention the musical talent at the university itself—in the spotlight, said its organizer, WPI director of choral activities Joshua Rohde, and served to strengthen WPI's relationship with the museum.

“Classical music has been around for hundreds of years and is mainly dominated by male performers,” Rohde said. “If you ask them what composers they know, people will list Mozart, Bach, Brahms … all male composers. We wanted to highlight living female composers and artists,” some of whom are now in their 20s and 30s, he says.

The songs were performed by two female a cappella groups, a flute ensemble, string quartet, a jazz ensemble with three soloists, and acoustic guitar and ukulele. “We spent time with musicians in the galleries—figuring out what made it special—and selected music from that,” says Rohde.

Biology and biotech major Brooke Honzel ’20 is the president of Alden Voices. The museum event combined two of her passions: music and the museum.

“I’ve always loved being able to go there,” she said of WAM. “It’s a calming place that I love to visit, like a sanctuary for me, personally. So, that we were able to perform there is very meaningful.”

Art in the air

Music was carefully paired with artwork, with the melodies complementing and offering a further interpretation of the pieces.

The Alden Choir performed in the Renaissance Court area of the museum, offering what Rohde calls a modern reinterpretation of the old mosaics on the walls. The pieces combined ancient elements, such as chants, with modern music.

The Medieval Chapter House section of the museum—from the Benedictine Priory of Saint John—was brought to the U.S. from France in 1927, according to WAM. It features 12th-Century architecture, complete with stained-glass windows. Here, Rohde says, a cappella groups Technichords and Ketones performed as a nod to the structure’s past, with Awake My Soul by Mumford & Sons among the selections.

Jazz was performed in the museum’s 20th Century gallery. While work of visual artists like Jackson Pollack was gaining notoriety, performers like Ella Fitzgerald were also rising to fame, says Rohde. Some Fitzgerald material was performed, as well as Duke Ellington’s It Don’t Mean a Thing and Feelin’ Good by Nina Simone, among others.

Acoustic guitars and ukuleles were played in the European remastered gallery featuring Spanish artists. To broaden the attendees’ experiences, Rohde says, the titles of the paintings were removed for the performance, to better help the art and music speak for themselves. Selections included Yellow Taxi, by Joni Mitchell and Avril Lavigne’s Complicated.

The Medwin String Quartet and Flute Ensemble performed instrumental arrangements in the museum’s McDonough Court, during this afternoon of combined, complementary creative work.

“Most people think of WPI as a math and engineering school,” Rohde says. “This shows that they also do great things, musically.” In addition to putting female composers and musicians front and center, the musical talent at WPI was highlighted—potentially breaking a few stereotypes along the way.

Honzel was especially interested in performing What Shall We Do With the Drunken Sailor as part of Alden Voices. “It’s an old sea shanty,” she says, “and it’s usually performed by men. But the version we sang was arranged by a woman.”

Rohde says that the groups usually perform at Alden Hall or the First Baptist Church. The WAM concert was a follow-up to an extremely well received and similar event at the museum this past fall. He had approached the museum with the idea of performing there as it’s right down the street from campus. Rohde hopes it will be a partnership that goes into the future.

“There has been some overlap, but these are relatively new connections,” he says. “The museum has been supportive, and we’re excited.”