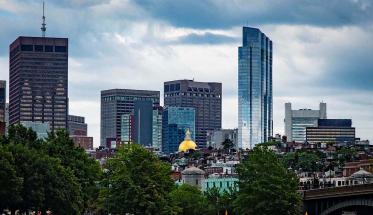 Whether it be a roundtable on robotics at WPI Seaport or students from the Boston Project Center studying emergency preparedness at wastewater facilities in the state, WPI continues making a mark in education and innovation in Boston with no sign of stopping.

Since opening in January 2018 as the university’s innovation and collaboration space in Boston’s Seaport District, WPI Seaport is continuing to evolve and has hosted a considerable number of events, according to Stephen Flavin, vice president, academic and corporate engagement, noting that people from campus, alumni, and university partners such as start-ups are the predominant users.

In addition to events such as roundtables hosted by groups like Mass Robotics and the Women’s Impact Network, WPI Seaport’s coworking space has proven to be popular with alumni, of which there are an estimated 13,000 within a 40-mile radius of the city, Flavin says. WPI is continuing to explore ways to make it easier for students to get there.

As Boston becomes a hub for financial technology, WPI is leading the way by launching a graduate program targeting this area, Flavin explains. “We’re viewed as a leading institution in technology,” he says. “Our Seaport space is raising WPI’s reputation and visibility in a thriving tech hub.”

Another hub, the WPI Boston Project Center (BPC)— with partners from government agencies, non-governmental organizations, businesses, and academic institutions in the Boston metropolitan area—is collaborating on issues related to sustainability and climate change, the environment, and public health and safety.

Some recent student work has included assessments of the impact of climate change on the Boston Harbor waterfront and on wastewater treatment facilities throughout Massachusetts.

One Interactive Qualifying Project (IQP) team working with Boston Harbor Now explored the vulnerability of 18 industrial and residential sites in that area should flooding occur from a rise in sea levels.

The students discovered that some of the sites—including Chelsea, where road salt is stored—were more prone to flooding than others. They recommended that more collaboration among key city, regional, and state authorities was needed for emergency preparedness planning.

“That was important,” says teaching professor of interdisciplinary and global studies Seth Tuler, co-director of the Boston Project Center, "because people have been saying that more collaboration was needed, and the study showed it.” 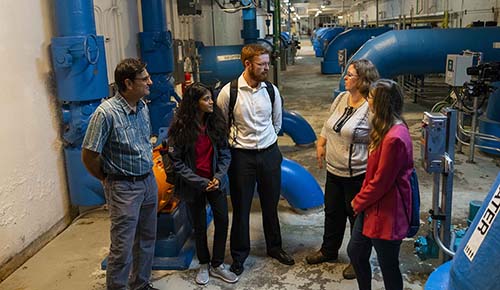 Another IQP team worked for MassDEP the state's Department of Environmental Protection, on emergency preparedness of wastewater facilities. The students determined there was inconsistent information from the facilities, inhibiting the state’s ability to manage risks posed by such things as severe storms, Tuler says. The group developed an interactive digital map of backup power capabilities and wastewater facilities and identified funding opportunities that could support needed upgrades.

Like the Seaport, the Boston Project Center brings a WPI presence into Boston.

“The BPC assists a variety of organizations in Boston with their efforts to advance sustainability throughout Massachusetts,” says WPI’s director of sustainability and professor of civil and environmental engineering Paul Mathisen, a BPC co-director. “I feel that many of WPI’s project and research programs provide valuable contributions to the initiatives in Boston. The Seaport location raises awareness of these programs and makes it easier to coordinate and collaborate with organizations in Boston.”

More on the Boston Project Center

In Boston, Massachusetts—and at 50+ project centers across the globe—WPI students immerse themselves in new cultures where they delve into problems that matter to real people. Learn more about how our students and one faculty member traveled to and from Boston, Massachusetts to embark on a distinctive immersive project experience working with four local sponsoring organizations.