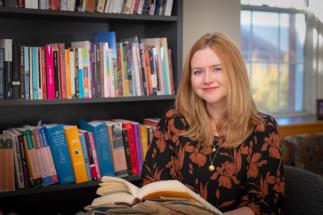 Kate McIntyre’s collection of stories, Mad Prairie, was selected as the winner of the prestigious annual literary award and will be published by University of Georgia Press in fall 2021.

Most of us are familiar with the old saying “Home is where the heart is.” But for Kate McIntyre, professor of creative writing, home for her—the state of Kansas—is a place of “productive tension,” both heart-filling and heartbreaking. And, it is the setting of her collection of stories, Mad Prairie, which recently won the Flannery O’Connor Award for Short Fiction.

The award, named after famous short story writer and novelist Flannery O’Connor, was established by the University of Georgia Press in 1983 as a vital launchpad for emerging writers by bringing their work to a national readership. Each year, one book manuscript is selected for publication from about 300 entries by the series editor, renowned American writer and social commentator Roxane Gay. Prior honorees include writers who have gone on to have storied careers, like Ha Jin, Antonya Nelson, and Mary Hood.

The Herd caught up with McIntyre to learn more about Mad Prairie, and what it means to receive such a prestigious literary award.

HERD: What was the inspiration for the stories in your collection?

KM: The inspiration is twofold: other literary works and lived experience. The collection’s literary forebears include the razor-sharp wit of Muriel Spark and Ottessa Moshfegh, the surreality of Kelly Link and Yoko Ogawa, and the unnerving horror of Shirley Jackson.

The stories are all set in rural and small-town Kansas, where I grew up. So alongside these literary influences, the stories were shaped by county fairs and demolition derbies, Friday night football and field parties, my first job catering fried chicken out of a bingo hall, the salt mines, the wide open prairies, and the skies, as the late Denis Johnson would have it, “as blue and brainless as the love of God.”

HERD: What are you hoping readers will take away from Mad Prairie?

KM: I actually have no hopes in this direction. I don’t think it’s the job of fiction to be didactic or to offer any clear message to readers. I tell students in my workshop classes that they can’t follow around behind their stories explaining them to readers. The work has to stand on its own. I’ve tried to make the stories as funny and troubling and true as I can, and now I cede ownership of them. Readers, I trust you to come to your own conclusions.

HERD: What is your favorite character and/or story of the collection?

I always love the thing I finished most recently best. In this case, it’s the novella that concludes the collection, “Culvert Rising.” As the novella opens, the protagonist Miriam’s parents have both recently died, and she has just graduated from a fancy east coast college. Naïve, catastrophically underprepared, and still deep in mourning, Miriam travels to rural Kansas to teach elementary school in a Teach for America–like program. In Culvert, Kansas, the toxic waste storage for the battery factory leaches into the soil, the hog farm lagoons have sprung leaks, and the students, at turns psychic, lethargic, and aggressive, might not be human. Through frequent phone calls, Miriam’s friend Elizabeth, who stars in several stories of her own, tries to lure Miriam back to the coast, but Miriam feels a strange compulsion to do her duty by her students. When Miriam learns the town’s secrets, the citizens fight back, leading to a showdown that leaves Miriam lashed to a tetherball pole as a tornado brews in the distance.

HERD: What does it mean to you to receive the Flannery O’Connor Award, and to have your work reviewed and selected by Roxane Gay?

KM: I got the news that my collection had won in an email, about half an hour before I taught my first Zoom class of A-Term. The first thing I did was reread the email. Then, I yelled to my husband to tell him. Then—and this sounds very dramatic, but it did happen—I cried for a while. The Flannery O’Connor Award is such a big accolade in the literary world and has such a history of launching emerging writers’ careers. In the midst of so much heartache—the lives lost to the pandemic, the constant reports of anti-Black police violence, the wildfires burning the west coast—it felt almost obscene to have received such good news. I’m still processing the dissonance.

I was thrilled to learn that Roxane Gay had selected my collection. I’ve been following Roxane Gay’s career ever since the very beginning, and she’s such a vital and generous voice in contemporary literature. Her imprimatur, so recently after she served as chair of the judges for the National Book Awards, means so much. Also, to have won the Flannery O’Connor Award is astounding to me, because Flannery O’Connor’s fiction has been so influential to my own.

HERD: What else are you currently working on/what are some future projects you plan to tackle?

KM: My next project, nearing completion, is a collaborative novel co-written with the wildly talented Joe Aguilar, assistant professor of Humanities & Arts, who is my husband. We began the novel, Uberhund! as a goof, a way to stay connected when we were teaching at different universities, but then we noticed that we loved working on it, and that it was turning out well. Uberhund! is a little different from my story collection, genre-wise. It’s literary speculative fiction, or cli-fi, fiction of climate change. It shares my story collection’s interest in dark humor and spectacle. We hope to finish the project over the upcoming long winter break.