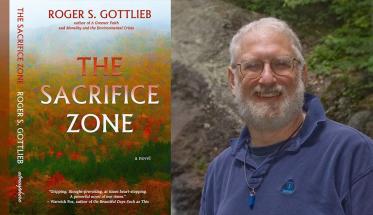 Roger S. Gottlieb, professor of philosophy at WPI since 1981, is internationally known for his work in religious environmentalism. He is the author or editor of  more than 150 articles and 20 books, including Engaging Voices: Tales of Morality and Meaning in an Age of Global Warming (Baylor University Press, 2011), a collection of short stories exploring moral, political, intellectual, and spiritual dilemmas provoked by the environmental crisis. His Morality and the Environmental Crisis (Cambridge University Press, 2019) is the 2020 recipient of the “Book Most Likely to Save the Planet” award from Independent Publisher.

Gottlieb’s debut novel, The Sacrifice Zone (Atmosphere Press, 2020), released this month, draws on decades of research and his nonfiction body of work and explores real-life environmental dilemmas and emotional upheaval in narrative form.

HERD: What do you wish to accomplish with The Sacrifice Zone?

RG: I’m asking a question not based on research but on my own personal experience: Is it possible to live with love, grace, contentment, and even some joy when there is so much suffering and destruction in your family and in the world? What can you give an addict who engages in destructive behavior, lies and steals from the family, and refuses a cure? What is it like to be part of a modern civilization that is polluting the earth, eliminating species, and poisoning people’s bodies? What would a person be like who faced these realities without running away, denying, or being forever wrapped in anger and fear?

HERD: Do you have a favorite character or quote from the book?

RG: In some ways Anne is the most interesting character. Despite Anne’s mastery of Buddhist discipline, the pain caused by her sister’s addiction never leaves her. The three main characters, and at least one of the minor ones, have something of me in them—of my best or worst sides, or me during the few times I’ve reached a fully spiritual engagement with the world’s or my family’s suffering.

HERD: In your article “Before Healing, We Need Connection” (Tikkun, April 29, 2019) you say, “all human beings can realize that the most basic building blocks of their bodies share a history with the rest of the universe.” In what ways do your characters embrace this belief in protecting, healing, and restoring the earth?

RG: It was not the belief in that connection that saved the characters, but the felt experience of it. The characters Sarah and Daniel are tied to the earth in general and to the Jamaica Pond area in particular. Daniel must find a way to live with the truth of the environmental crisis and what happens to Sarah so he won’t be forever embittered. Anne realizes she can connect with her sister in ways that don’t demand that her sister change or require her to cure her sister. The novel poses a choice—either find these real connections or live in misery.

HERD: The mere act of living in a modern world means we are applying environmental pressures. What advice would you give to the reader who wants to be a better inhabitant of the earth?

RG: The most important thing an individual can do is to join with others in the global environmental movement. It is important to be moral, responsible, and caring in our daily life. But the key is putting pressure on governments to constrain corporate behavior and change our environmental status quo. If we don’t change our ways, civilization as we know it simply will not survive.

For more information about Professor Gottlieb and his books, visit rogersgottlieb.com.