The three strong women from different countries and walks of life share a passion for mathematics. They started at WPI at the same time two years ago and became friends, and did not allow their temporary status at the university to stop them from quickly becoming a presence in the Mathematical Sciences Department.

Their positions at WPI are coming to a close at the end of the next academic year, but before they go, post-doctoral mathematicians Lucia Carichino from Italy, F. Patricia Medina from Venezuela, and Xiaodan Zhou from China, organized the first Advancing Women's Impact in Mathematics Symposium, New England (AWIMS), to take place on April 7 from 8 a.m. to 5:30 p.m. in Higgins Laboratories. 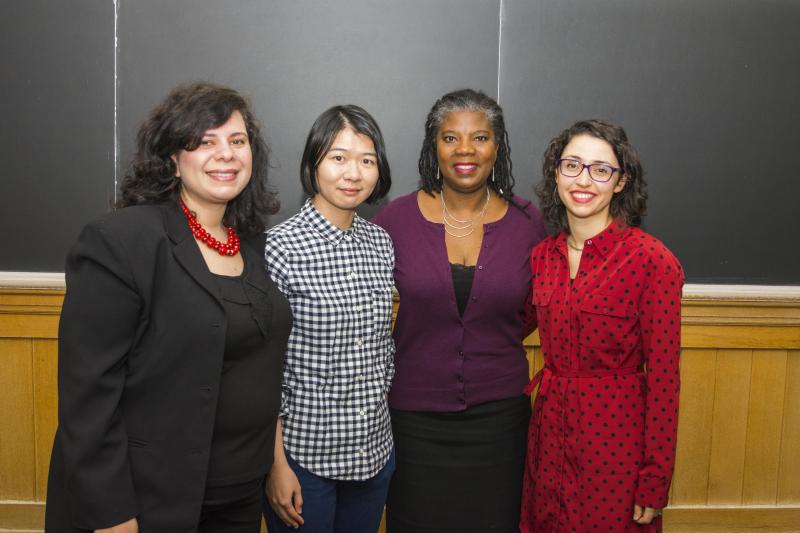 The women took on the undertaking voluntarily, and they organized the event with the support of senior faculty, professors Suzanne Weekes and Sarah Olson, applying for and receiving grant funding from the Women Impact Network, the Department of Mathematical Sciences, and the Center for Industrial Mathematics and Statistics for the event, planned in cooperation with the Association of Women in Mathematics (AWM), Weekes explains.

“In Italy, we had no event like this,” says Carichino, who had all male mentors as an undergraduate student. “When I was a grad student in Indiana, I attended the 2014 Midwest Women in Mathematics Symposium, it was a great experience in a really welcoming environment.”

About 50 percent of undergraduates majoring in mathematics at her school in Italy were women, she says, but most math professors were men.

“We lose women along the way, going from graduate school to academia” she says.

The goal of the event is to serve the New England region’s mathematical sciences community by providing a forum for women in the mathematical sciences to network, share research interests, and initiate projects with colleagues and mentors, the women say. They also hope it will foster collaborations by providing exposure through plenary talks, tutorials, contributed talks, panel discussion and a poster session. Lunch and refreshments will be provided.

The women were quick to point out that, although it is a women’s symposium, men are always welcome to come and support their research.

Carichino, who shares an office with Medina, believes an all-women event is a more encouraging research environment.

“It is the human aspect of a panel of successful women sharing with each other their paths and the opportunity to talk with them and share real life experiences,” she says. “You feel more at home in a friendly environment and you see that you can do it.”

Medina moved to US from Venezuela for graduate school in 2006. She lost her support system when she moved from Oregon to Massachusetts, but established another with the women and research mentors in the mathematics department at WPI.

This is not her first time organizing a workshop to increase the participation of women in mathematics. While Medina was working towards her PhD at Oregon State University, she organized the first Sonia Kovalevsky High School and Middle School Mathematics Days, mostly for girls and minorities.

“I wanted to show them that I’m Hispanic and a woman and I can actually do math and be successful,” she says. “I wanted them to know that I was reaching out to them because I care.”

She was also inspired by the Women's Intellectual Network Research Symposium at Brown University last year and other workshops and programs in the region. Medina says she met new collaborators at the Institute for Computational and Experimental Research in Mathematics at Brown and has already written research papers with them that have been submitted for publication.

“I wanted to provide such opportunities to other women at WPI and in New England,” she says. “I want to bring that benefit to the community. I never had that opportunity in Venezuela. It is one of the opportunities I saw in such an amazing country as the U.S. and made my path easier for me.”

Xiaodan Zhou, who came to the U.S. in 2011 from China, says she was inspired by posters she saw at graduate school of four women mathematicians from Taiwan who immigrated to the U.S., where they obtained their PhDs.

For females in math, it is very important to network and support each other during your career.

“It is inspiring to hear female faculty telling their stories,” she says. “There is a lot of struggle in China with people dissuading you from doing math. When I was in high school, I received special training for the math Olympics and after the first selective exam, I was the only girl with about 20 to 30 boys. There was a lot of pressure, but I still managed to be in the top 10 in my class. I had this attitude that I really loved mathematics and I was showing that we (women) can really do mathematics.”

“For females in math, it is very important to network and support each other during your career,” she says.

Weekes, who has been at WPI for 20 years, said she is excited to have WPI host a math symposium for women. Having had only male mentors at university and never having a math female university professor, Weekes says it was touching when a female student thanked her recently for being her first woman math professor and told her how important that was to her and to other young women in the class.

“That was a reminder that it actually makes a difference when people see themselves somehow reflected in the community that they aspire to be a part of,” Weekes says.

Carichino, Medina, and Zhou know that having more women succeed in mathematics will allow for new ideas and insights in this vast field. The connections, collaborations, and community that AWIMS aims to build will help make this happen.