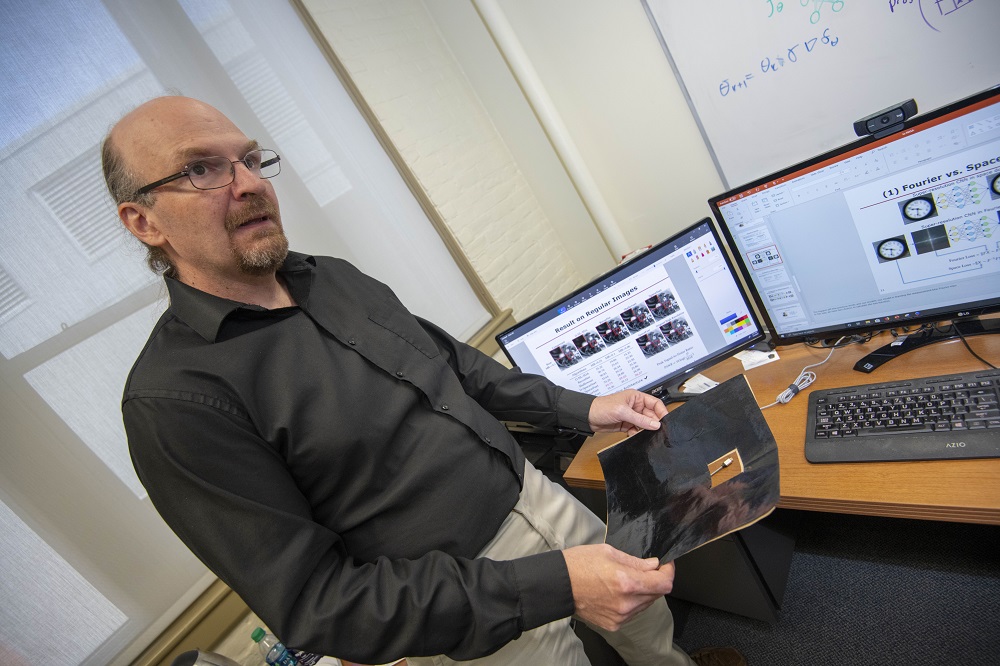 Randy Paffenroth, associate professor of mathematical sciences at WPI, holds a carbon-based sheet known as Miralon®, which is used in a variety of spacecraft applications.

Miralon® yarns, which can be as thin as a human hair, can be wrapped around structures like rocket fuel tanks, giving them the strength to withstand high pressures. Imperfections and variations in thickness can cause weak spots in the yarn and the resulting composite. Paffenroth, with a team of graduate students, is analyzing data from the manufacturing process to help ensure a more consistent end product.

Nanocomp uses a modified commercial “basis weight” scanning system that scans the nanomaterial for mass uniformity and imperfections, creating a visual image of density; Paffenroth and his team are using machine learning to train algorithms to increase the resolution of the images, allowing the machine to detect more minute variations in the material. They have developed a unique mathematical “compressed sensing / super resolution” algorithm that has increased the resolution by nine times.

Built with the Python programming language and based on an artificial neural network, the algorithm was “trained” on thousands of sets of nanomaterial images in which Paffenroth had already identified and located flaws. He 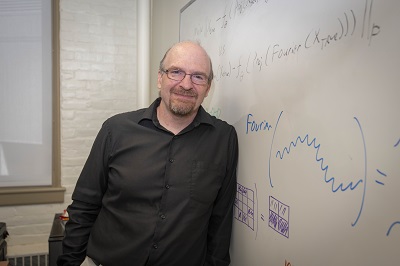 Paffenroth and researchers will use machine learning to help Nanocomp Technologies with manufacturing processes.

essentially gave the algorithm a series of practice tests where he already knew the answers (known as “ground truth”). Then, he gave it other tests without the answers. “I give it a sheet of material. I know the imperfections going in but the algorithm doesn’t. If it finds those imperfections, I can trust its accuracy,” said Paffenroth.

To make the machine learning algorithm more effective at making a high-resolution image out of a low-resolution image, he combined it with the Fourier Transform, a mathematical tool devised in the early 1800s that can be used to break down an image into its individual components.

“It’s exciting to use this combination of modern machine learning and classic math for this kind of work,” he added.

Paffenroth’s work is funded by an $87,353 grant WPI received from Nanocomp Technologies, a New Hampshire-based subsidiary of Huntsman Corporation that makes advanced carbon-nanotube materials for aerospace, defense, and the automotive industry. WPI is a sub-contractor to Nanocomp, which received an $8.1 million contract from NASA to advance its carbon nanotube sheets and yarns.

“It’s exciting to use this combination of modern machine learning
and classic math for this kind of work.”

Miralon® has already been proven in space. For instance, it was wrapped around structural supports in NASA’s Juno probe orbiting the planet Jupiter to help a challenging problem with vibration damping and static discharge. NASA has also used Miralon® nanomaterials to make and test prototypes of new carbon composite pressure vessels, the precursors to next generation rocket fuel tanks. NASA spacecraft will need that added strength and durability as they travel farther from home and deeper into space.

As part of its current NASA contract, Nanocomp is trying to make Miralon® yarns that are three times stronger, and the work by Paffenroth’s team is a big part of making that happen.

“Randy is helping us achieve this goal of tripling our strength by improving the tools in our toolbox so that we can make stronger, better, next-generation materials to be used in space applications,” said Bob Casoni, Quality Manager at Nanocomp. “If NASA needs to build a new rocket system strong enough to get to Mars and back, it has a big set of challenges to face. Better materials are needed to allow NASA to design rockets that can go farther faster and survive longer.”

Casoni noted that with the higher resolution from WPI’s algorithm, Nanocomp can see patterns and variations in its materials that they couldn’t see before.

“We can not only pick up features, but we also have a better idea of the magnitude of those features,” he said. “Before, it was like seeing a blurry satellite image. You might think you’re seeing the rolling hills of Pennsylvania, but with better resolution you see it’s really Mount Washington or the Colorado Rockies. It’s pretty amazing stuff.”

And with better measurement tools, Nanocomp also will be able to improve its manufacturing process by testing whether changes in factors like temperature, tension control, pressure, and flow rates create better materials. “We can use better measurements to optimize our ultimate product performance,” said Casoni. “Randy is helping us understand our manufacturing process better. He’s doing his “magic math” to help us better understand variations in our product. The uniformity of that material plays a big part in its ultimate strength.”

Paffenroth and his team will also develop algorithms to be used in active feedback control systems to predict how good a particular piece of material will be as it’s first being made, helping to ensure a more consistent end product. The algorithm analyzes the properties measured at the beginning of the manufacturing run to effectively predict the properties at the end of the run, including mechanical properties and length of run.

“We can use machine learning to predict that Nanocomp won’t get a useful length of material out of a particular production run,” said Paffenroth. “It helps them with waste. If they can tell in the first few meters of the run that there will be a problem, they can stop and start over. The Holy Grail of process engineering is that the more you understand about your process, the better your process is.”