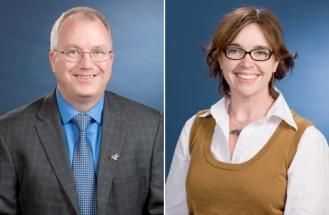 Worcester Polytechnic Institute (WPI) has announced the appointment of new leaders for two of its academic programs. Douglas T. Petkie, PhD, most recently professor of physics and chair of the Physics Department at Wright State University in Dayton, Ohio, has been named head of the Physics Department. Jennifer deWinter, PhD, associate professor and associate head of the Department of Humanities and Arts, is the new director of WPI's Interactive Media and Game Development (IMGD) Program.

"I am delighted that these two critical programs within the Arts and Sciences will benefit from the leadership of such talented and distinguished educators and scholars," said Karen Kashmanian Oates, Peterson Family Dean of Arts and Sciences at WPI. "Professors Petkie and deWinter share a commitment to interdisciplinary work and a strong track record in innovative pedagogy, qualities that make them well suited to academic leadership at a university known for its groundbreaking project-based curriculum and its tradition of applied research that freely crosses disciplinary boundaries."

Petkie, who was a member of the faculty at Wright State for 14 years, served as faculty vice president in the 2015-16 academic year and held a joint appointment with the Electrical Engineering Department from 2008 to 2013. An experimental physicist, his research focuses on the development of millimeter-wave and terahertz systems for sensing applications, including high-resolution gas phase molecular spectroscopy, nondestructive evaluation and subsurface sensing, and micro-Doppler biometric studies.

Among his achievements is the development of the FASt Scanning Submillimeter-wave Spectroscopic Technique that revolutionized gas-phase molecular spectrometry; the development of a multi-physics MEMS-based photoacoustic spectroscopic sensor system that miniaturized the sensing platform used for in-situ gas phase spectroscopy; and a mobile millimeter-wave radar platform that can monitor respiration and heart rates at distances of up to 50 meters. His work has been supported by more than $8 million in external funding and has resulted in more than 50 publications.

At Wright State, Petkie has been a co-investigator on several provost-sponsored Teaching Innovation Grants aimed at transforming physics pedagogy and providing faculty with the professional development they need to improve teaching and student learning. He has also been active in STEM education programs that have provided hundreds of undergraduates with research and experiential learning opportunities to prepare them for graduate school and the workforce, as well as a number of K-12 STEM pipeline initiatives. He won Wright State's Outstanding Faculty Commitment Award for his work teaching the Physics First Year Seminar, part of the University College Learning Community.

Petkie received a BS in physics from Carnegie Mellon University and a PhD in physics from The Ohio State University. Before joining Wright State, he held faculty appointment at Bluffton College in Bluffton, Ohio, and Ohio Northern University, as well as visiting academic research posts at The Ohio State University, NASA's Jet Propulsion Laboratory, and the Fraunhofer Institute of Applied Solid State Physics in Freiberg, Germany.

"I am very excited to join WPI," Petkie said. "It has such a dynamic and energetic environment with a strong focus on experiential learning and interdisciplinary research. The balance between theory and practice and the passion everyone shares for the WPI Plan makes this a truly unique place. I look forward to working with the WPI community to continue to elevate the impact WPI has on the world."

An active faculty member in the IMGD Program and co-director of WPI's Professional Writing Program, deWinter joined WPI in January 2009 after receiving a PhD in rhetoric, composition, and teaching English from the University of Arizona. At Arizona, she taught writing and new media, worked as a research assistant and an assistant editor, and collaborated with the University Learning Center on curriculum development. Her research interests include computer game theory, computer game development, and cultural studies, with a particular interest in how culture, a local phenomenon, moves internationally. She is a member of the Learning Games Initiative, a group of scholars and game designers dedicated to the general study of games and their use to teach concepts and skills, and has developed numerous games with the group.

In 2003 she was named a Coleman Foundation Faculty Entrepreneurship Fellow at WPI. Supported by the Coleman Foundation in Illinois, the program prepares faculty members to promote entrepreneurship and teach students how to start and successfully run their own business. A former entrepreneur and small business owner herself, deWinter has helped students pursue entrepreneurial ideas in game development and other fields. In 2015 she took over as director of WPI's Japan Project Center, which hosts IMGD and computer science majors completing their Major Qualifying Projects at either Osaka University or Ritsumeikan University.

In addition to her PhD, she received a BA in English literature and Japanese language, an MA in teaching English as a second language, and an MA in rhetoric, composition, and technical communication, all from Eastern Washington University. In 2014 she co-founded and launched the Influential Game Designers Series with Bloomsbury Academic Press, for which she wrote the inaugural book: Shigeru Miyamoto: Super Mario Bros., Donkey Kong, The Legend of Zelda (2015). She has also co-edited two collections: Video Game Policy: Production, Distribution, and Consumption, and Computer Games (Routledge, 2016), and Technical Communications: Critical Methods and Applications at the Intersection (Routledge, 2014).

“I chose to come to WPI because of the IMGD program," deWinter says. "The faculty here are dynamic, the students are engaged, and the emphasis on project-based education grounded in theory perfectly suits developing interactive media and game design. Already, faculty and students are driving innovation with their work in interactive robotics, games for social justice, and complex technical artistry, which is evidenced in the many awards that the resultant projects receive. Ultimately, I see my job as facilitating this work and telling the stories of IMGD to industry professionals and invested stakeholders.”