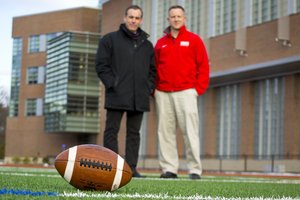 Physics and football—not exactly two concepts that most people link together. Yet in the wake of the New England Patriots’ "DeflateGate" scandal, terms like PSI and prolate spheroid are being thrown about in the same breath as touchdowns and quarterbacks, and WPI is being called upon to connect them.

Just hours after the Patriots won a 45-7 victory over the Indianapolis Colts at the AFC Championship Game on Sunday (Jan. 22), the NFL began investigating allegations that the team had used under-inflated footballs during the game. Since then, football fans across the nation have debated a key question: did the deflated balls give the Patriots an unfair advantage that helped secure their spot in upcoming Super Bowl XLIX?

WBZ-TV and Worcester News Tonight (Ch. 3) turned to WPI to get to the science behind the controversial and captivating situation. Reporter Ken MacLeod came to campus to tap into the technical expertise of both WPI physics department head Germano Iannacchione and head football coach Chris Robertson.

Iannacchione analyzed the physics behind the football’s shape and aerodynamics of gameplay to show how deflating a "prolate spheroid" (the technical term for football’s oblong form) could lead to as many disadvantages as advantages. For example, he noted that it might be easier to grip a deflated ball in the middle but harder to grip towards the end.

He also expressed doubt that deflating a ball by two pounds per square inch (PSI)—the amount that 11 of the Patriot’s 12 game balls are alleged to have been deficient—would impact its movement through the air. In the end, he concluded, "when you think about the broader picture, you realize that wasn’t an advantage at all."

Robertson deflated a football by two PSI to show that it does look different, but he concurred that it would not provide an overall advantage, saying, "it might be easier to grip, but not necessarily easier to throw." He also explained that the small size difference would be negligible for a large pro quarterback, stating, "I can’t imagine that [Tom] Brady has a hand that’s small enough where it would matter."