Women undergoing in vitro fertilization (IVF) may become pregnant with fewer treatment cycles, thanks to a new device developed by a team of researchers from Worcester Polytechnic Institute (WPI) and Stanford University that uses an “obstacle course” to sort and select faster and healthier sperm cells for use in IVF treatment.

This new device was created by a team co-led by Erkan Tüzel, associate professor of physics, biomedical engineering, and computer science at WPI, and Utkan Demirci, professor of radiology and electrical engineering (by courtesy) at Stanford University. The work was funded by two separate but collaborative grants from the National Science Foundation and was published in the most recent issue of Advanced Science, a high-impact, peer-reviewed scientific journal.

The microfluidic device, which can be used in clinics, is dubbed SPARTAN, short for Simple Periodic ARray for Trapping And IsolatioN. It uses a field of three-dimensional posts that create an obstacle course for the swimming 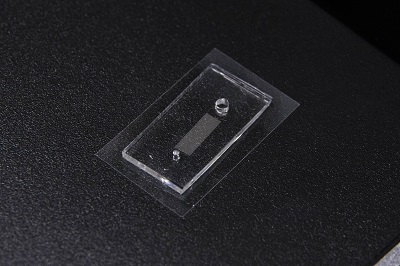 A close-up of the sperm-sorting device.

sperm cells. The strongest and healthiest sperm get through this array the fastest and then are collected at the outlet to be used in the IVF process. (Video illustration)

“With SPARTAN, we not only get sperm with excellent motility, but also with normal morphology and better DNA integrity, helping families worldwide by reducing the stress of multiple IVF procedures, while potentially increasing pregnancy rates.” said Tüzel. “This could increase patients’ chances of getting pregnant.”

According to the Centers for Disease Control and Prevention, 12 percent of women in the United States between the ages of 15 and 44 deal with infertility issues. In that same age group, 7.3 million American women have used infertility services. And the National Institutes of Health reports that one-third of infertility cases are caused by male reproductive issues, while another third are caused by a combination of male and female reproductive issues or unknown causes.

The SPARTAN device is about 4 millimeters wide and 12 to 16 millimeters long. Sperm are simply injected into one end and the fastest and healthiest are collected on the opposite end for immediate use in in vitro fertilization. The device also prevents the type of damage to cells that can occur with traditional sorting methods, such as those using high-force centrifuges. Because SPARTAN can be used in the fertility clinic, sperm do not need to be frozen and shipped to a lab for processing; the in-clinic sorting procedure takes between 5 and 30 minutes.

This new sperm-sorting device also could mean that patients will spend less money overall on IVF treatments, which generally cost about $15,000 per cycle, because with the new sperm sorting technology they could be able to become pregnant without going through as many treatment cycles.

Tüzel, who develops computational models of swimming organisms at the microscale, focused his part of the research on modeling the design of the SPARTAN device and used algorithms and fluid physics to model human sperm and how they move in such a complex environment. James Kingsley, a WPI graduate student pursuing a PhD in physics, worked with Tüzel on the project.

Demirci’s Stanford team created  the overall experimental device designs based on Tüzel’s theoretical models, fabricated and tested the prototypes, and determined the best experimental parameters and medium for the sperm cells to swim through the device.

“Our success was the result of our close collaboration, bringing theory and experiment together—WPI working with the Demirci Lab,” said Tüzel. “And as a physicist, this is very exciting. We’re going to have a product in the market helping people. That doesn’t always happen in physics in such a short time frame, especially if you are a theoretical physicist.”

Demirci said the collaborative work enabled the research teams to create a new technology that can have a real impact at the clinic, potentially leading all the way to live births.

“The collaboration between Erkan’s lab and my lab is invaluable,” he added. “WPI brings an outstanding theoretical tool that allows us to understand how microscale objects, such as sperm, interact with their environment; and we are able to design this know-how into real microfluidic devices, clinically validate what we designed, and experimentally improve it into a real-world application.”

DxNow, Inc., a Gaithersburg, Md.-based company that develops advanced microfluidic and imaging technologies, licensed the patent for SPARTAN from WPI and Stanford last September. The company plans to apply for FDA approval and expects to release the device for commercial use in July 2018.