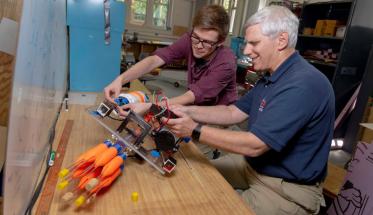 Undergraduate students at Worcester Polytechnic Institute (WPI) are building an autonomous underwater robot that could help reduce the threat posed by an invasive species of fish that, unchecked by natural predators, threatens the well-being of coral reefs and other marine ecosystems in Coastal U.S. and Caribbean waters, including commercially and recreationally important native fish the region depends on.

In a multi-year effort launched last fall, WPI student teams are developing a robot designed to autonomously hunt for and harvest lionfish. The project’s goal is to reduce the impact of the invasive species on marine ecosystems from the Caribbean up to the coasts of Florida and Georgia. Since the fish is a pricey delicacy, the robot also could provide a new source of income for local fishermen. 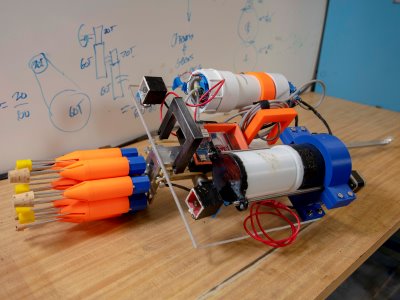 The first student project team, completing its MQP (Major Qualifying Project), worked this past academic year to develop several systems that will enable the submersible robot to distinguish lionfish from other species and spear them. The robot could offer fishermen, who normally scuba dive to spear their catch, a more efficient and safe way to harvest the fish, which have poisonous spines that are painful to touch.

A graduation requirement for every WPI student, MQPs are team-based design or research projects that give students professional-level experience. The 2017-18 project team consisted of William Godsey, Brandon Kelly, Joseph Lombardi, Nikolay Uvarov, and Andrey Yuzvik, all members of the Class of 2018 who majored in robotics engineering. The faculty advisors were Kenneth Stafford, teaching professor and director of the university’s Robotics Resource Center; Bradley Miller, associate director of the Robotics Resource Center; and Craig Putnam, senior instructor in computer science and associate director of WPI’s Robotics Engineering Program.

“There are economic and environmental benefits to this, and the fish are delicious,” said Kelly, who focused on the robot’s computer vision system. “I’ve seen the massive devastation caused by these fish and it really made me want to work on this project. We felt like we could create some change in the world.”

Lionfish, a colorful aquarium fish native to the South Pacific and Indian oceans, have become a serious problem in the Caribbean and western Atlantic. The National Oceanic and Atmospheric Administration (NOAA) calls them the “poster child for invasive species.” With no predators outside of their native waters, the population is expanding at an astonishing rate, putting additional stress on coral reefs already struggling from the effects of climate change, pollution, and overfishing.

Lionfish also are disrupting native fish populations that are commercially, recreationally, and ecologically important to the region. According to the Ocean Support Foundation, the fish, which have stomachs that can expand up to 30 times its normal volume as they eat, can reduce juvenile fish populations on a reef by nearly 90 percent in as little as five weeks. Lionfish have been found with more 50 species of juvenile fish in their stomachs.

Harvesting the fish could be an economic boon to the region, since they can fetch up to $20 per pound, making them not only a food source for fishermen but a solid source of income, as well.

There are commercial robots that could be used to harvest lionfish, but they must be directed by an operator connected to the robot by a tether, which could damage fragile reefs. The WPI robot would be untethered and would hunt for fish on its own, without human direction. Once it recognizes a lionfish, it would change course to intercept it and spear it. The buoyant spear tip would detach and float the fish to the surface to be collected. A fisherman could use multiple robots to maximize his catch.

“The goal is to be able to toss the robot over the side of a boat and have it go down to the reef, plot out a course, and begin its search,” said Putnam. “It needs to set up a search pattern and fly along the reef, and not run into it, while looking for the lionfish. The idea is that the robots could be part of the environmental solution.” 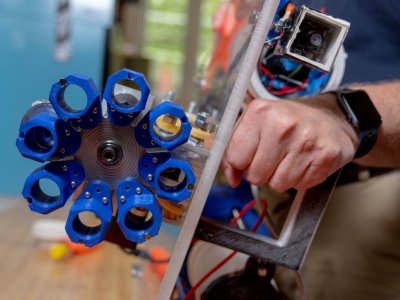 A close-up of the carousel that moves the spear tips
into position to be thrust into lionfish by a metal shaft.
One of the robot’s cameras can be seen in the small
watertight box at left.

The past year’s MQP team members used machine learning, advanced computer vision libraries, neural network software, and computer vision models to develop the robot’s computer vision system, which is the key to distinguishing lionfish from the other fish and aquatic species in the area. They showed the system thousands of images of lionfish of different colors, taken from different angles and in different lighting conditions, to train it to recognize a lionfish with greater than 95 percent accuracy. “The students also showed the system pictures of what it absolutely must not aim at—namely divers!” Putnam said.

The team also developed the spearing and buoyancy compensation systems. The robot has a revolving carousel, not unlike the cylinder of a revolver, that holds eight detachable spear tips. A motorized mechanism connects to a metal shaft that thrusts the spear tips into the fish. As the shaft retracts, leaving the boutant spear tip embedded in the fish, the carousel turns to move the next spear tip into position. As the spear tips are used, the robot loses buoyancy. To compensate, the researchers built a watertight, air-filled chamber that enlarges slightly after each spearing to displace more water and equalize the robot’s bouyancy.

The team also designed a water-tight chamber to protect the robot’s motherboard and electronics from the salt water, which is highly corrosive. “In many ways, this was the hardest part of the project,” said Godsey, who worked on the system’s buoyancy and electronics chambers, along with its shooting mechanism. “Just because something is waterproof doesn’t mean it will work in salt water, which is an incredibly corrosive substance.”

The robot is being designed to attach to a commercially available, autonomous submersible robot.

During the 2018-19 academic year, a second MQP team will focus on the robot’s global navigation system, which will enable it to autonomously establish and navigate a three-dimensional search grid as it seeks lionfish.

“This is a real-world problem and the students attacked it,” Stafford said. “WPI’s responsibility is to develop students with the confidence and competence to take on global problems. We are giving them the tools to attack these problems.”