WPI Robotics Team Has a Mission with Mars

WPI team is a finalist in the NASA-sponsored Space Robotics Challenge; Team to program a virtual robot to perform critical tasks to repair a Martian habitat

A team of robotics students and faculty and staff from Worcester Polytechnic Institute (WPI) is among 20 finalists in the NASA-sponsored Space Robotics Challenge (SRC), the agency announced today. The only official team from a university, according to NASA, the WPI team will compete for $1 million in prize money.

Part of NASA’s Centennial Challenges program, SRC aims to develop the capabilities that humanoid robots will need to help astronauts on a mission to Mars. Under the terms of the competition, SRC teams must program a virtual robot, modeled after NASA’s Robonaut 5 (R5), to complete a series of simulated tasks in dangerous or extreme environments.

“We’re very excited to have been named finalists in the Space Robotics Challenge, which will enable us to build on the experiences we’ve gained in previous robotics challenges,” said Michael Gennert, team lead and head of WPI’s Robotics Engineering program. “We’re all in for this competition, with 40 students, faculty, and staff. Our team has been working together to gain experience and sharpen our development skills.”

NASA awarded WPI $15,000 for advancing to the final round of this popular competition. The space agency said 405 teams from 55 countries originally pre-registered; 92 teams made it to the qualifying round, and 20 finalists were named.

To advance to the final, teams had to demonstrate how they could complete two simulated tasks with their virtual R5 robot. WPI completed a perception task by having the robot accurately report the position of lights in a simulated 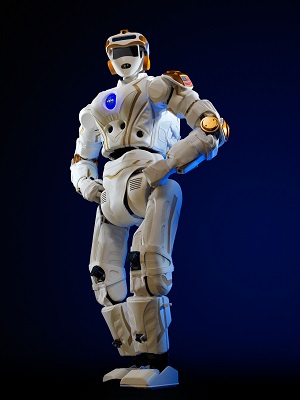 environment, and a mobility task by programming the robot to walk three meters, press a button to open a door, and pass through the door without falling. Gennert credits the team’s success to date to the use of so-called “agile development,” a software methodology that makes frequent significant improvements to the robot’s performance.

“We had to be disciplined to pull this off, only doing work that added value, cooperating closely, and taking individual responsibility, all under a weekly development cycle,” he said. “It was a great learning experience for everyone, especially for new participants who learned from challenge veterans, bringing the entire team up to speed quickly.”

The WPI team is now participating in the virtual competition, which will take place through June. Teams will be able to practice using updated releases of the simulation software. A live competition will be held June 13-16, during which teams will compete in software simulation to direct the R5 robot—commonly known as Valkyrie—to perform tasks in a virtual setting on Mars.

During the virtual competition, each team’s R5 will be challenged with resolving the aftermath of a dust storm that has damaged a Martian habitat. Teams will be asked to complete three objectives: align a communications dish, repair a solar array, and fix a habitat leak. The round has eight complex tasks—ranging from climbing to picking up tools—that simulate the challenges a robot might encounter on Mars.

The top four teams will be awarded cash prizes ranging from $25,000 to $125,000. Additionally, up to six teams will each receive a bonus award of $50,000 for successfully completing every task within a run.

Vinayak Jagtap, project manager for the WPI team and a PhD candidate in robotics engineering, said the WPI team is composed of five “cross-functional” teams. Each includes members who are experienced in perception, control, and motion planning. Jagtap pointed out that having teams with varied expertise—rather than a team with a single focus area—makes the overall team stronger.

“It mitigates a lot of risk because we won’t have a single point of failure,” he said. “Every team has members who are able to do each of the tasks. The cross-functional teams aren’t dependent on other teams to get things done.”

Jagtap, who has a strong interest in space robotics, received a Mannooch Fellowship, which is restricted to students with an interest in space research. He is optimistic about WPI’s chances to do well in the virtual competition, noting that the university fared well during the DARPA Robotics Challenge finals in June 2015. Team WPI-CMU, made up of faculty members and students from WPI and Carnegie Mellon University, took seventh place out of 24 international teams at the DRC finals. Its humanoid robot, WARNER (short for WPI’s Atlas Robot for Nonconventional Emergency Response), had to perform several tasks, including walking over rubble, climbing a ladder, and driving an all-terrain vehicle.

“We learned a lot from the DARPA Robotics Challenge, particularly getting to know how humanoids work,” said Jagtap. “This is definitely the logical next step, which is trying to understand how you take what you’ve learned in (the DRC Finals) and make it applicable to other robots.”

In this case, Jagtap said, the team would aim to make sure that their technological efforts work not only on WARNER, but on the Valkyrie R5 robot. “The key is understanding how you can generate whole systems that are modular enough to be ported onto other robots with high complexities,” he said.

For more information on the competition, visit the NASA Centennial Challenge page. Additionally, individuals can learn more about the WPI team at this page.