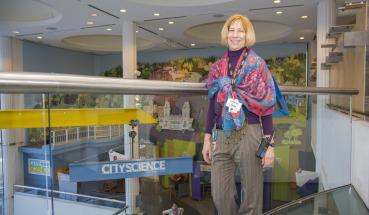 An interactive exhibit that recently opened at Worcester’s EcoTarium has visitors talking and learning—it was created with the help of eight WPI students. It is the only one of its kind in the U.S., according to the museum’s director of exhibits.

Visitors to the EcoTarium engaging in the interactive "City Science: The Science You Live" likely have no idea that the research and development for the project actually started more than five years ago with two teams of WPI juniors as their Interactive Qualifying Project. 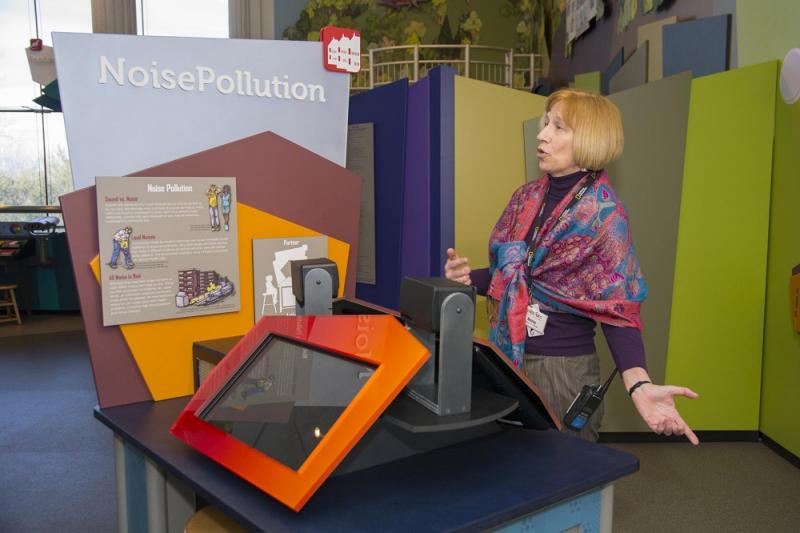 Betsy Loring, director of exhibits at the EcoTarium, says the students worked under a tight timeframe in terms of designing an interactive exhibit, with little initial funding to work with.

“The exhibit development process, all the way through to a finished product, is like an engineering process,” Loring explains. “You start with paper prototyping and get more and more hardened prototypes as you work out the kinks. You’re constantly testing and changing things.”

"City Science" is the EcoTarium’s newest, hands-on interactive exhibit, situated on the middle level of the museum. It immerses visitors in the exploration of a modern city, inviting them to investigate the science they encounter every day, but rarely stop to consider. It is organized around seven thematic areas for visitors to explore, including city animals and city systems, such as the rail and sewer systems, and health and engineering components.

WPI students came up with the “soundscape in the neighborhood” component of the exhibit, Loring says, that encourages visitors to explore what their neighborhood sounds like and to mix different sounds to replicate it.

People were mainly unified in their answers, Loring says, except when it came to what they thought Worcester sounded like.

“For the trustees living in the green part of Worcester, it was birds chirping and distant train whistles,” she says. “For kids in urban Worcester neighborhoods, it was sirens, gunshots, gang fights, and music. People were surprised at how different their answers were, and that was the genesis of the city soundscape.”

WPI students started by testing dozens of interactives and then went to work brainstorming and programming prototypes to see what worked.

“A motto in early prototyping is ‘Fail early. Fail often. Fail cheaply.’” Loring says. “You need to find out the stumbling blocks and until you have a user, you don’t know. Until you test, you’re surprised constantly.”

Out of approximately 70 interactives, 27 were included in the final exhibit, she says.

“The students researched how museum interactive exhibits help people learn, and their aim was to encourage family learning and open-ended investigation as part of the exhibit. It was the perfect IQP for students to see how they can develop an exhibit to help families understand the science around them as they go about the city each day.” -Anne Ogilvie

The students also came up with a noise pollution interactive for the neighborhoods component, which encourages visitors to explore what city sounds stress them out or relax them.

The work WPI students carried out was invaluable, she says, and Neighborhood Soundscape has families and visitors engaging in conversations about their neighborhoods.

“It is a unique exhibit—the only one in the country,” she says. “We just don’t, and probably never will, have the kind of budget to work with an exhibit technology and design firm because of the early prototype with failure built into it. That’s a lot of money invested in stuff you know will never come to fruition when you spend money developing further interactives.”

Anne Ogilvie, director of global operations at WPI, says there were two strong teams of students from various majors working on the project.

She and Dominic Golding, associate teaching professor in the Interdisciplinary and Global Studies Division, were co-advisers for the project. Golding worked with the EcoTarium and other museums to obtain funding, Ogilvie says.

“The EcoTarium is a fantastic community resource and this new exhibit highlights the science people encounter in their everyday lives,” she explains. “Science is happening all around us every day and we take it for granted. This exhibit draws our attention to it.

“The students researched how museum interactive exhibits help people learn, and their aim was to encourage family learning and open-ended investigation as part of the exhibit. It was the perfect IQP for students to see how they can develop an exhibit to help families understand the science around them as they go about the city each day.”