Today, Worcester Polytechnic Institute awarded more than 1,000 bachelor’s degrees during the university’s 149th commencement ceremony, held under a white tent on the campus quadrangle in unseasonably cool weather. Nearly 800 master’s and doctoral degrees were bestowed in a separate ceremony on Thursday evening.

President Laurie A. Leshin and Board of Trustees Chairman Jack T. Mollen presided over today's celebration, at which the keynote address was given by Rodney Brooks, chairman and chief technology officer of Rethink Robotics.

Brooks has had a long and fruitful career in robotics technology that spans several continents and many distinguished organizations, and includes service on innumerable advisory boards and membership in some of the most prestigious professional and academic associations. He was also the founder, former board member, and chief technology officer of iRobot Corporation, and former founding director of the MIT Computer Science and Artificial Intelligence Laboratory (CSAIL).

In her charge, WPI President Laurie Leshin asked the
graduates to do well, but also do good, in their careers.

In his remarks, Brooks discussed Amara’s law, which states: “We tend to overestimate the effect of a technology in the short run and underestimate the effect in the long run.” By way of example, he talked about the evolution of computers in the last 50 years, reminding the audience that although early computers were enormous but “extraordinarily feeble by today’s standards,” people predicted they would very quickly take over all office jobs and eventually “decide that people were useless and let off nuclear weapons to get rid of us all!” Those short-run overestimations, he said, blinded people to the real long-run possibilities of the computing power we now take for granted in our cell phones and other devices.

“You will see similar tectonic transformations of your world due to AI and robotics,” Brooks told the graduates. He urged them “to focus on three nouns: compassion, contribution, and community” as they chart their course through life, and to be open to the ability of others to enrich their lives in unexpected ways. He asked students to always look for ways to contribute and to maintain their WPI community connections while also continually building new communities through their work and other interests. “Don’t scrimp on community,” he said. 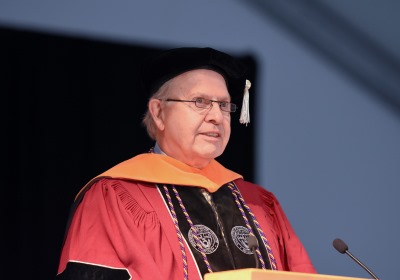 President Leshin, in her remarks to the class of 2017, congratulated the students for their accomplishments and for making the journey that “takes many twists and turns. And that’s by design,” she said, stressing the unique experience WPI offers through the hands-on projects and off-campus work. She described work by students who traveled 9,000 miles to New Zealand, where they worked with the Maori community to power a hydroponic greenhouse, and by those who focused on Worcester and developed an aquaponic greenhouse for urban farming. In both, Leshin noted, the students understood that “a good technologist takes the time to understand the problem, the struggle, the challenge—and its environment—before offering up solutions. There is no arrogance. There is curiosity and commitment, humility and seriousness of purpose.”

Leshin concluded her remarks with a challenge to students to not only do well in their careers and for their families, but to do good throughout their lives. 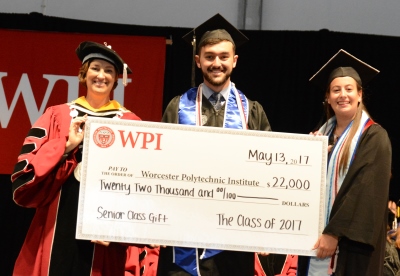 Austin Higgins and Kelly Slabinski present the Class of 2017
Gift, for the Global Passport scholarship, to President Leshin

Peterson has had a long and successful telecommunications career distinguished by impressive achievements and critical moments of decisive, visionary leadership. After holding posts at major organizations in the United States and Canada, including Nortel Networks, AT&T, and Lucent Technologies, he became the first CEO of Avaya, a multinational business technology company spun off from Lucent. For his achievements at Avaya, Peterson was recognized as CEO of the Year by Frost & Sullivan in 2001, when he also received the WPI Presidential Medal, given to those who use their knowledge and skills to advance science and technology and serve the greater good.

Having served on the boards of numerous organizations, including the board of overseers of the Amos Tuck School of Business, where he earned an MBA, he has also remained active at WPI, endowing, with his wife, Maureen, the Peterson Family Professorship in the Life Sciences and Bioengineering and, in 2007, establishing the Chairman's Exemplary Faculty Prize, WPI’s highest honor for faculty achievement. The $10,000 prize recognizes combined excellence in teaching, research, service, and advising.

This year, the Chairman’s Prize was presented to Diane Strong, professor in the WPI Foisie Business School and director of the management information systems (MIS) program, who was described as “a creative and meticulous scholar” who has helped found three distinct fields within MIS over the course of a career that has spanned three decades. 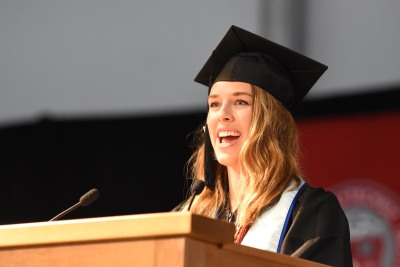 Class speaker Veronica Delaney told the graduates they|
would "continue to flourish, using theory and practice
to make a positive impact on the world"

Class speaker Veronica Delaney, from Rehoboth, Mass., who received a bachelor of science degree in mechanical engineering, reflected on the impact of the WPI project-based curriculum that is built upon its motto, Lehr und Kunst, or theory and practice, and applying acquired knowledge to solve real-world problems. “Theory and practice have been ingrained into our very being, knowing that theory or practice on their own are not as effective as when they are together,” she told her fellow graduates. “We will continue to flourish, using theory and practice to make a positive impact on the world.” Delaney will soon begin work for General Electric Oil and Gas in its Operations Management Leadership program.

Since 2016, WPI has held two distinct exercises in the spring to celebrate the accomplishments of its undergraduate and graduate students, owing in part to the growth of its programs, particularly its graduate programs. In addition to 1,026 undergraduate degrees, WPI awarded nearly 800 master’s and PhDs Thursday evening in a Graduate Commencement ceremony at which Deborah Wince-Smith, president of the U.S. Council on Competitiveness, gave the keynote.

And on Friday, 15 cadets of the Army, Navy, and Air Force ROTC programs were commissioned as officers in the U.S. military during the Worcester Consortium of Colleges Reserve Officers' Training Corps Joint Service Commissioning Ceremony. Air Force Lt. Col. Brent French presided as commissioning officer, administering the oath of office and delivering the keynote remarks.