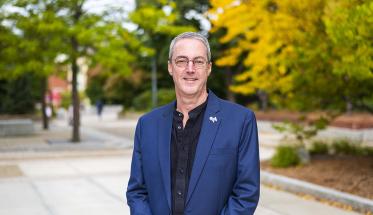 If you’ve heard anything about the interim dean of the Foisie Business School (FBS) Steve Taylor, you might wonder how he decided to earn a humanities degree from MIT. Or how his work as a playwright resulted in worldwide productions. Or how he merged those interests into this new role at FBS.

Taylor’s background is proof that he’s not afraid to follow his gut. He began studying aeronautical engineering at MIT, but by senior year he was a humanities major—a playwright with a technical mind. Themes of business, organization, and leadership have captivated him and driven him to explore the issues in an artistic way.

Business might get a bad rap with younger generations, but Taylor says it’s essential to stability. “It’s a sustainable form of organizing to make the world a better place,” he says. “That’s what businesses are, can be, and should be.” But if millennials cast a cautious eye at business, how can a business school succeed?

That’s the challenge of all business schools, but Taylor is optimistic about WPI. “There’s a clear need for a graduate education that increases technical knowledge and has a certain amount of management and organizational knowledge,” says Taylor. “We can give them both.”

“There’s a clear need for a graduate education that increases technical knowledge and has a certain amount of management and organizational knowledge. We can give them both.”

Graduate education in business schools is changing worldwide, resulting in a smaller pool of candidates and more competition for those students. “We cannot be a stand-alone business school and compete in the northeast,” says Taylor. “We have an advantage that most business schools don’t. We are tightly coupled with a technological university that has very low barriers for collaboration.”

Taylor says that while he enjoyed the conceptual approach to complex engineering problems at MIT, the process of having to “grind through” hours to complete problem sets wasn’t his thing. When his “Plays and Playwriting” elective hooked him from the start, he knew he had to change his path.

“I found the engineering work conceptually really interesting, but the actual practice of doing it painful and uninteresting,” he says. “Writing plays was the exact opposite. The conceptual part of it is not particularly challenging or exciting, but the actual writing is immensely fascinating to me at the detail level. The use of lights and staging and the use of language is infinitely fascinating.”

Despite his dad’s warnings about making a mistake—the loss of his ROTC scholarship (moving out of a technical major disqualified him), and his still-active commitment to the Air Force for four years of service—Taylor followed his gut.

Keeping a foot in each world, he worked in technical roles—cost and schedule control systems analyst, consultant, CFO for a start-up—even as he continued to write and produce plays. When Taylor earned an MA in performing arts from Emerson College, the two worlds began to merge. When he entered Boston College’s PhD program in management and organizational studies, the link between business, organization, management, arts, and theatre was exactly what he was seeking. He landed at WPI after two years teaching at the University of Bath in the UK.

“I want to help technologists get better at getting their cool technology into the world to benefit society. And I also hope they can do it in a way that’s kind. I think you can be strong and be kind. It’s entirely possible.”

His focus on organizational aesthetics combines both his specialties. The field recognizes that successful management is rooted in art and science. Taylor views the world as an artist and one who sees the world as an organizational culture, so his plays, which have been performed in England, France, Poland, Canada, New Zealand, Italy, and the United States, explore organizational issues using recognizable family dynamics or interpersonal situations.

As a student, Taylor wanted to change the world, but never saw how theatre could do that in the US. He did see another way. “Businesses do change the world,” he says. When leaders change, business, and eventually culture, follow suit. “Leadership and interpersonal dynamics are fundamental to identify what is going on in problematic situations,” he says. As an organizational system, both sides must understand their own contributions to interactions. In a system, one side will change based on adjustments from the other side. Exploring that complexity in playwriting and observing it in business settings is Taylor’s passion.

Taylor carries this approach into his new role as interim dean. “I think at WPI we would like to graduate STEM professionals, engineers, technologists, who understand technology and who want to use it for the benefit of society,” he says. “I want to help technologists get better at getting their cool technology into the world to benefit society. And I also hope they can do it in a way that’s kind. I think you can be strong and be kind. It’s entirely possible.”

As business schools move into a more tech-based world, Taylor says WPI is positioned to remain competitive. “We have an ability to work closely with engineers and scientists that most schools do not,” he says. “That is our distinct advantage. Having a STEM-focused MBA is a first step, but it can’t be our last step. It has to be just a first step in reimagining graduate management education that is fully integrated with STEM education.”