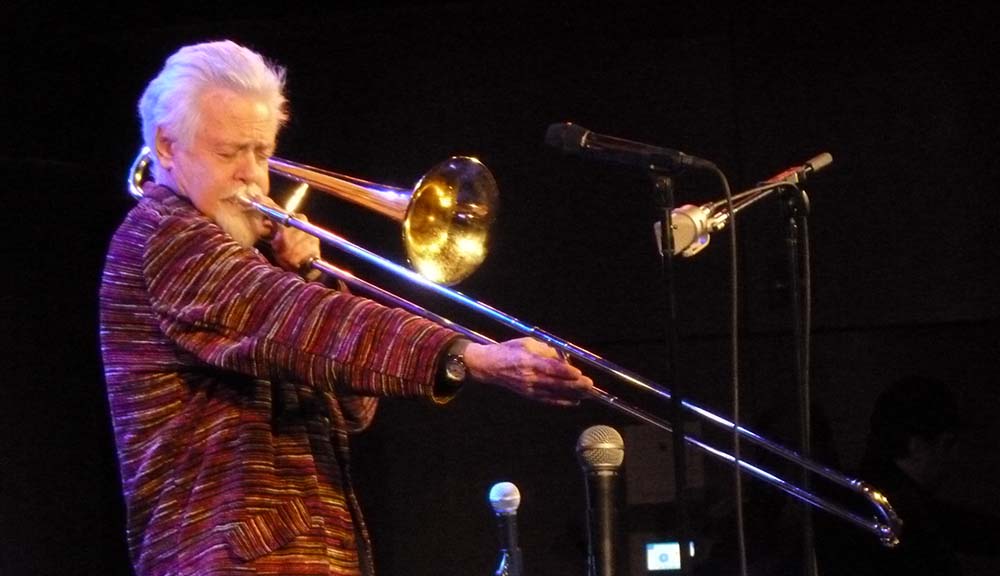 The archives of internationally acclaimed jazz trombonist Roswell Rudd will soon be part of the Weiss Jazz History Database, located at WPI.

When assistant teaching professor Rich Falco invited two jazz experts to address his Jazz History Database class last year, little did he know it would lead to WPI's acquiring the archive of a jazz heavyweight.

In a major coup for the database that Falco founded, internationally acclaimed jazz trombonist Roswell Rudd’s massive archive of work—audio, video, and print—is being donated so that everyone will be able to hear the music of a man the New York Times called “a central figure in the avant-garde jazz scene of the 1960s and '70s.”

“We have never acquired an archive as large as the Roswell Rudd collection,” says Falco, who also serves as director of jazz studies at WPI. “Included are hundreds of hours of video of live performances with artists filmed on location all over the world in concert halls and in venerable jazz venues. Some of the most recognizable names in cutting-edge jazz are captured in performance with Roswell.”

A lifetime of music to preserve

Rudd, who passed away in December 2017 at 82, was a titan on the jazz scene—a composer and musician. He taught at colleges and collaborated with musicians from around the world.

“After his return to commercial recording and international performances in 1999, his music became more diverse, mixing tuneful original compositions and jazz standards with R&B classics and ballads from France and Cuba,” the Times wrote.

Verna Gillis, Rudd’s longtime companion and collaborator, says she’s thrilled to be giving his archive to the university, which is also the official home of the New England Jazz Alliance Hall of Fame. The “Roswell Rudd Collection” will launch on the database Nov. 17, Rudd’s birthday. He and his contributions to jazz will also be celebrated that day with a concert in New York City.

“WPI has so much to offer. Look at their intention. Look what they’re doing,” Gillis says. “This is modern—the best use of technology.” As for Rudd, she says it would’ve been “beyond his wildest dreams” to know that his work, including hand-written scores, would be preserved like this.

“There’s something precious about handwriting," she adds. "Seeing Roswell’s scores written in pencil by hand—that’s very moving to me.”

"I thought it was important to document their stories."

The Weiss Jazz History Database has been a labor of love for years, with more content always being added. Check out the video for more on how and why the database was established and how it'll contribute to the history of jazz in communities around the world.

Gillis first learned about the database from Ben Young (a lecturer in jazz history at Jazz at Lincoln Center and a world authority on Roswell’s music) and Tom Bellino (a Grammy Award–winning managing director/producer and founder of the Planet Arts Records label). Both are on the database’s advisory panel and were working with Gillis to organize Rudd’s work when they attended Falco’s Jazz History Database class.

“Once they understood the focus of the Jazz History Database," Falco recalls, "they both suggested to Verna that she consider archiving Roswell’s materials at WPI and preserving and sharing all of this wealth through the database.”

Falco remembers meeting Gillis for the first time. “As soon as we met, we knew this would be a good fit,” he says. “I left her home with the first load of boxes and have been receiving more materials almost weekly. My promise was to treat Roswell’s archive with great respect and to disseminate these materials widely.”

Acquiring such an important archive is also a boost for the database’s future.

“Along with the prestige of housing this archive and sharing it on our Jazz History Database online web museum, comes credibility and trust, two of the most important attributes for future acquisitions of this importance,” Falco says, adding that WPI students and faculty process and edit all the materials that are donated. “The acquisition of the Rudd archive has already opened the door to many other artists reaching out to the database.”

Gillis, meanwhile, says she feels a sense of ease knowing that the Rudd collection now has a permanent home for future generations to see. “That’s Roswell’s legacy,” she says.