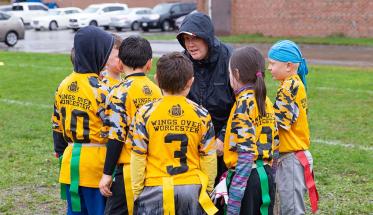 Beyond the Classroom: Susan Roberts, Chemical Engineer and Football Coach

When summer transitions to fall in New England, football fans head to the gridiron. Susan Roberts, professor and head of the Chemical Engineering Department, is no exception. In fact, she doesn’t just head to the gridiron—she gets right on it as head coach for eight-year-old daughter Emmelyn’s Wachusett Flag Football team, the “Steelers.”

“My daughter loves to play," Roberts says, "and I wanted to show her that girls can do anything. She wants to be on the field and competing. 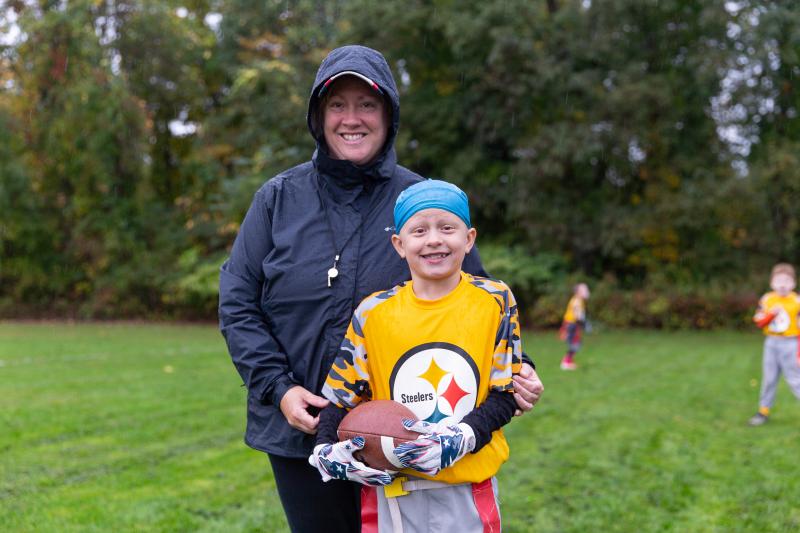 Susan Roberts and her daughter, Emmelyn.

"I have been a football fan my entire life. I never thought about being a football coach—even when my boys played football. It wasn’t until I saw that my daughter was the only girl on the field and that the other coaches were men that I really felt compelled to coach for her and because I thought I could do a great job at balancing training and nurturing.”

Roberts, the only female coach in the Wachusett League, just wrapped up her second year leading the co-ed team, ranging in age from 7 to 9. It was her daughter (whom she describes as “gregarious” and “outgoing”) who sparked Roberts to take a shot at coaching, especially since there aren’t any women doing it on any of the 16 teams in her division, she said.

“It shocks me—how are girls going to want to come into this sport if there aren’t people who look like them?” Roberts says.

"My daughter loves to play, and I wanted to show her that girls can do anything." -Susan Roberts

She estimates there's about five girls out of the hundreds of kids playing in the league. Emmelyn loves having her mom as coach—she says, “It's fun having her there because she helps me get better at football, she encourages me to do my best, and she shows me that girls can do anything that boys can do.”

There’s another driving force behind Roberts’ desire to coach her daughter, the autoimmune skin disease called alopecia, which Emmelyn has. That’s why it’s important to Roberts that she build Emme’s confidence, teaching her she can do anything she wants to.

Roberts takes a one-on-one approach when instructing her young team. “I try to both encourage them with lots of high fives and help them learn by working with them individually during practice,” she says. “I coach from a completely positive standpoint. I focus on the technique and the things they’re learning. There's a term I yell before each play: ‘Hustle to the huddle!’ Kids this age want to please and want to be first so generally they all come running. We do have a cheer at the end of the game. I say, ‘Who’s the best team?’ and they yell, ‘Steelers.’ I then say ‘You can do better than that. Who’s the best team?’ and they scream with delight, ‘STEELERS!’"

The team practices 1.5 hours a week as a group, and they meet a half hour before each game to warm up and run plays. Her strategy is to exhibit lots of energy to keep the kids interested, and to listen. “They make play suggestions and suggestions on what drills to run during practice,” she says.

Football Is in Her Blood

Roberts came from what she describes as a “very blue-collar family that didn’t have much money.” But, she says, her father always had two season tickets to the New England Patriots so he could take her and her sister to a game every year. And the tradition continues. “I have four season tickets for my family so I can share my love of football with my children.”

What Makes It All Worthwhile

It’s Emmelyn’s love for the sport and how happy she is when playing that makes coaching so satisfying, Roberts says. “It’s not what she says, but it’s the passion she exhibits on the field and the smile on her face when she makes a good play. I still get goosebumps.”

This profile is the third of an ongoing series exploring the interests and hobbies of WPI faculty members outside of their classrooms and laboratories (past profiles include Aaron Sakulich and Terri Camesano). To nominate a faculty member for this series, email dailyherd@wpi.edu.