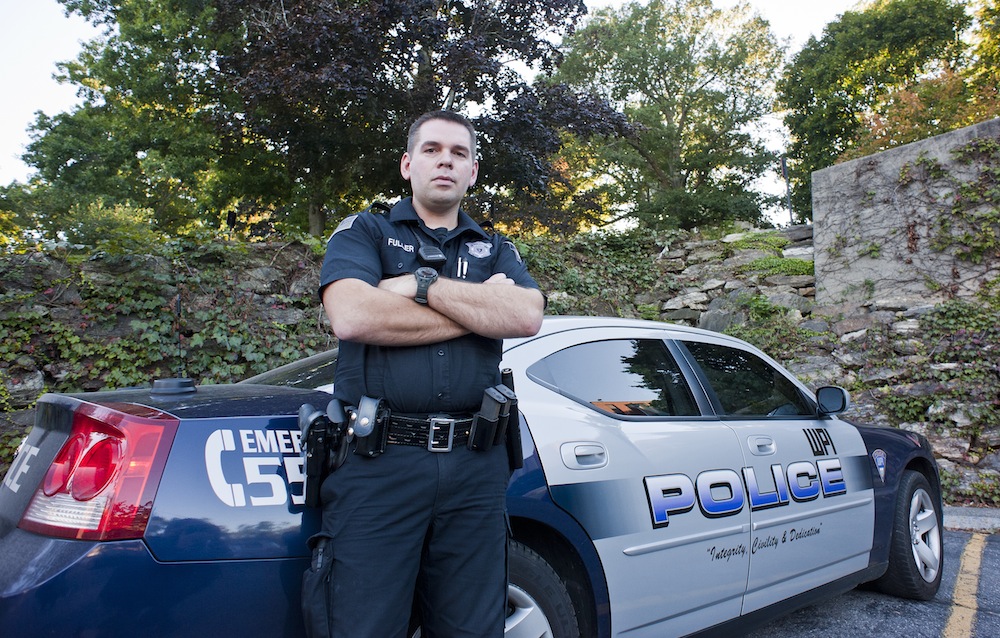 Although the thought of having an active threat on campus is not one many people care to contemplate, ignoring the potential for trouble does nothing to keep it at bay.

In response to issues raised by the Campus Safety Committee, Campus Police and Human Resources have collaborated to offer recent “active threat discussion groups.” WPI wanted to take an active role in giving reliable, accurate, and useful information that can help protect everyone on campus.

“We want to arm our community with options,” says Beth Mulvey, of the HR office. “The idea is preparedness. But we hope no one ever has to use anything they have learned.”

Class participants learn about what they can do if they are ever in a dangerous situation. “This is active threat training,” says Officer Stuart Fuller, who teaches the classes with Sergeant Michael Jacobs, both of whom are the department’s firearms, use of force, and active shooter instructors. “It is to teach people the options they have should something serious happen on campus.”

“One of my personal goals is to make these people leaders,” states Fuller.

The threat of workplace violence or a school shooting situation might be rare, but it is also real. “We are not trying to be fear mongers,” says Fuller. “We are trying to be prepared. Everyone does fire drills, but when was the last time we had a fire?” Thus far, several hundred participants have taken the one-hour presentation. In addition, individual departments can request an assessment of their individual area. The program will eventually be offered to  students.

The next class is October 2 in the HR training room (Forkey Conference Room in Harrington Auditorium), with a couple of slots open in the 11am session, although the afternoon session is full. On October 8, there will be an 11am session in Salisbury Labs 105 and a 4pm session in the HR training room. “Don’t worry if you can’t make either group,” says Fuller, “as high demand means more will be scheduled.”

The overwhelming response is encouraging. “We didn’t know what to expect,” says Fuller. “This is a subject some people don’t want to think about, and the fear of the unknown motivates some people.”

Fuller also hopes faculty and staff will recognize how they can be alert to potential signs of trouble. “Be aware of your workplace and of the students,” he says. “Know the people you work with.” He wants to empower people with the information they are given. “One of my personal goals is to make these people leaders, to be the kind of people who say, ‘Something bad is going on but we can survive. Follow me.’”

The hardest part about talking about the unknown, says Fuller, is the inability to give specific steps to follow to safety. “In a tech school, people want definitive answers. But there is no one size fits all.” So when one circumstance might be best to run from, another might not. The discussion groups give the tools to decide what choice is best. Participants learn about the OODA Loop, which uses the four steps of observe, orient, decide, and act to determine the best plan.

Fuller advises, “Don’t ignore intuition. You know when something isn’t right.” If something is off, call us.” Just remember, when you call 911 from a cell phone, it goes right to the State Police and can cost precious moments. Fuller would like everyone on campus to program the campus police phone number into their phone: 508-831-5555.

Faculty and staff can sign up through Regi. http://www.wpi.edu/webapps/regi/hr.html