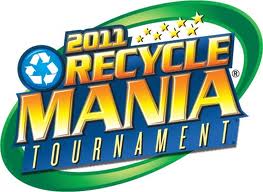 Right now WPI is bearing down on the final weeks of RecycleMania, a nationwide college competition that began on February 3 and ends March 30. With almost 5,000 students, employees, and visitors bustling about WPI every day, keeping the campus green can be an enormous job.

During those eight weeks, more than 600 schools report recycling and trash data and are ranked in various categories. Last year WPI earned an award for the greatest week-to-week increase in paper recycling. This year, as of mid-point in the eight-week competition, WPI sat squarely in the middle of the pack of competitors. Sustainability coordinator Liz Tomaszewski notes, “Although we continue to recycle about the same volume of paper, cardboard, and bottles and cans as in previous years, our recycling rate is decreasing, because we are producing much more solid waste.”

Spurring on the competition—and promoting environmental awareness every day—are WPI’s student and staff Eco-Reps. These volunteers receive leadership training and agree to serve as “sustainable change agents” for their dorms and workplaces.

Peer influence is more powerful than posters and pamphlets, according to RecycleMania’s primer on changing campus behavior by the Environmental Motivation Project. WPI has makes use of these concepts, offering prizes for catching someone “green handed” (for example, turning off an unneeded light). Other RecycleMania participants have used Recycl-ympics and flash mobs for motivation.

Abbie White, lab manager for Biology & Biotechnology, serves as Eco-Rep for Goddard Hall. She makes a point of interacting with students and staff to encourage recycling. “With my peers, I respond to questions about the specifics of sorting and recycling. In my job, I ask my work-study students to recycle the packaging from deliveries.” She also monitors the recycling bins for contamination with paper towels and other trash. White aims to set an example by shunning the elevator and the power assist doors—that is, until an accident made her temporarily dependent on them. “Therefore, I have empathy for people that really need these energy consuming resources,” she says.

Gina Betti, associate director of the School of Business, is the Eco-Rep for the WPI tenants of Gateway II at 50 Prescott Street. “I have posted signage in key areas and talked with key people about helping to spread the word to other tenant and visitors in the building about WPI’s commitment to recycling,” she says. She is looking into adjustments to the building’s automated lighting and water systems. “Lights go on by motion detector, not necessarily when and where needed,” she notes. “Toilets flush while you are still using them, wasting water.” She adds, “Perhaps the theatre groups could put on skits near waste paper cans and recycling bins to inspire behavioral change. A little humor helps!”

Final RecycleMania results will be announced April 12. Tomaszewski says, “This is an area where you’re never going to achieve perfection. That’s a good thing, because it’s going to force you to continually grow.”

What you can do: