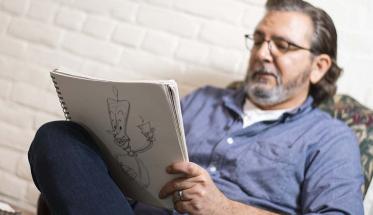 Animation for the Rest of His Days

Lots of movies have been filmed in and around Worcester, but associate professor of Interactive Media & Game Development Ed Gutierrez is bringing some Hollywood magic of his own to the city simply by sharing his expertise with WPI students.

After seeing the original Jungle Book when he was young, Gutierrez knew what he wanted to do with the rest of his life. “It was just the idea of the possibility of drawing and making art as a job that I found exciting,” he says. “And I just held onto that, even to this day.” 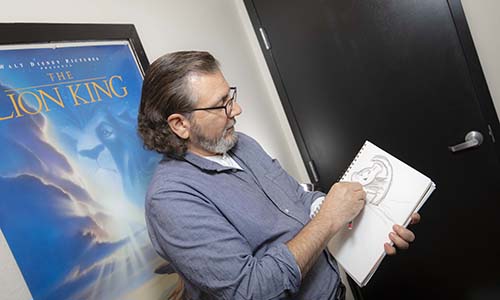 Gutierrez served as assistant animator for Timon and Pumbaa in The Lion King.

That dedication led to a long career at Walt Disney Feature Animation, where he worked in a variety of animation capacities on some of the biggest Disney classics that are still capturing hearts today ...The Lion King, The Little Mermaid, and more.

Basically, he’s got no shortage of conversation starters for dinner parties.

Ultimately, it was the experience Gutierrez had while earning his master’s degree in 3D animation and visual effects that sparked his interest in teaching. After teaching in California, he joined WPI's IMGD faculty in 2017.

“At that point, it was more worthwhile to me to share my experience as an artist and animator than achieving another screen credit from a studio,” he explains. He liked the idea of making his film experiences accessible to students across the country who might not have access to them otherwise, and the energy, authenticity, and enthusiasm from department head Jennifer deWinter about WPI and the IMGD program sealed the deal.

Gutierrez also loves games, and enjoys teaching new things about the technicalities of how games are made to his students while he shares his expertise in animation. His background, primarily in animation for film and television, Gutierrez says, lends itself over to the gaming side of the spectrum naturally.

“Animation is animation,” he says. “The technology, methods, and production pipeline may vary but the goal is the same—to produce a quality visual storytelling experience. The common element to make any project successful is being able to work collaboratively on a team, and this works perfectly with WPI’s model and its project-based interdisciplinary collaborative environment.”

“It’s not about the student who can draw the best or who knows the intricacies of the latest software that makes an amazing animator. It’s the student who has something to say.”

As well as contributing to such an integral part of so many of our childhoods, Gutierrez also had a bonus role working on the character of Lumiere—he was part of the team who worked on Beauty and the Beast, the first animated film nominated for Best Picture at the Oscars.

Being up for such a prestigious award poses many questions, the main one being "How do you celebrate something so monumental, so Hollywood, so … cool?"

“It was cake and champagne all morning the following day in the animation department at the studio,” he says. “We jokingly asked if the Beast won Best Actor over Anthony Hopkins for Silence of the Lambs.”

This year, Gutierrez is rooting for Isle of Dogs (“I usually want the underdog to win—no pun intended”), Wes Anderson’s stop-motion fantasy drama, to take home the top prize for Best Animated Picture. He’s got a special fondness for stop-motion animation (“The puppets don’t even have to move, just to see them, they have so much life and personality just sitting there”), so much so that he’s got plans to create a stop-motion film one day, going so far as to create stop-motion film sets in his home and office.

Over the course of his time at WPI, Gutierrez says that he’s been impressed by the natural talent for the arts and animation that he’s found, and that in addition to IMGD students, BME and robotics students have produced some of the strongest animation and artwork he’s seen, something he says is due to one thing:

“It’s not about the student who can draw the best or who knows the intricacies of the latest software that makes an amazing animator. It’s the student who has something to say.”