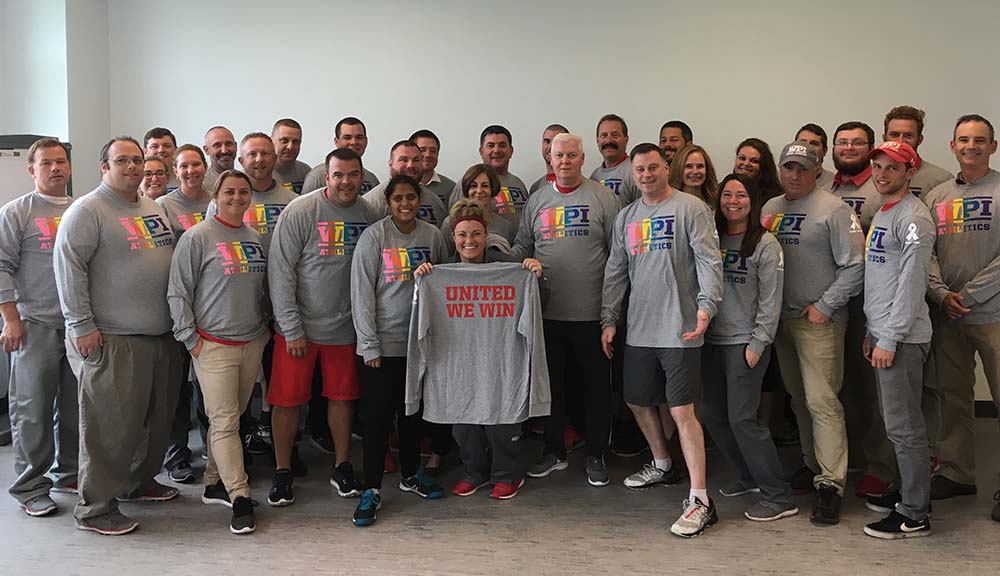 Every year, WPI’s Department of Physical Education, Recreation, and Athletics creates a new staff shirt generally reflecting a theme important to the department. This year’s shirt—with a rainbow-hued “WPI” on the front, a white cancer ribbon on the sleeve, and “United We Win” in bold red letters on the back—did double duty. The rainbow colors and cancer ribbon gave a nod to the original intent of cancer awareness, but the design also encompasses another issue paramount to the department: diversity and inclusion.

“Unfortunately, our department has been affected greatly by cancer through the battles by our student-athletes, their parents, and our own department members and their families,” says Dana L. Harmon, director of physical education, recreation, and athletics. “We always are trying to help those various cancer causes, and with the shirt this year we are also able to highlight our commitment to diversity and inclusion.”

Although there's already awareness around diversity and inclusion within the department, the university’s introduction of Project Inclusion boosted the momentum, says Harmon. “Project Inclusion helped us understand the campus climate and helped inform us of what we could do on a public scale,” she says.

The timing of the shirt’s debut resulted in what Harmon calls a “happy result” as it coincided with a national social media campaign around diversity that launched the same week. The T-shirt buzz helped the department raise awareness for both diversity and cancer while also instilling pride in the department.

The social media campaign was the work of Ishita Tibrewal, who is interning in the department as the event management and sports promotion coordinator. Her role is funded in part by an NCAA Division III Ethnic Minorities and Women's Internship Grant and proved serendipitous to athletics intentions. The timing was valuable as Harmon wanted to raise awareness of diversity and inclusion using social media, and Tibrewal knew of the NCAA D&I campaign through the National Student Athlete-Advisory Committee and thought it would work for WPI. When Tibrewal brought the idea before Harmon, she was given the go ahead. “She took it and ran with it,” says Harmon. “It was a pretty special result.”

Tibrewal says the social media campaign around diversity and the T-shirts to raise awareness about cancer are a physical testament of the department’s values. “This fall we have been very proactive in supporting campaigns such as this one,” she says. “Our student-athletes are very proactive about issues that affect WPI and the community at large. Almost all our teams organize an awareness game where they dedicate the game to a cause and spread awareness about it.”

Still, the overwhelming community response to the rainbow T-shirts took the department by surprise. It also allowed them a new opportunity. “We were asked to put these T-shirts up for sale due to the positive response and the profits from the sale will be allocated among the student groups that do programming for cancer awareness and diversity and inclusion,” says Harmon. “This helps us partner with other campus groups in these important areas.”

“It is an outlet for individuals to showcase how people from different backgrounds impact campus on and off the field. It helps create an environment here at WPI that anyone can feel comfortable and succeed in.” -Benjamin Seeto

Campus-wide reaction to the T-shirts garnered requests in person and through social media. Alumni athletes reacted positively to the social messages and to the shirts, which creating a groundswell of awareness off campus.

“I think these campaigns and the efforts we are putting into it play an important role in making our department more inclusive and accepting,” says Tibrewal. “I think it sends a strong message and shows that WPI Athletics cares about more than just athletics.”

Varsity baseball player Benjamin Seeto ’21 says the NCAA diversity campaign makes it easier for the community get to know each other in a way they hadn’t previously. “It is an outlet for individuals to showcase how people from different backgrounds impact campus on and off the field,” he says. “It helps create an environment here at WPI that anyone can feel comfortable and succeed in.”

Seeto says his peers noticed his social media participation on Instagram and that gave him an excellent opportunity to explain the campaign and its purpose. “I think as student-athletes we are often seen as leaders on this campus and by taking part in this campaign we can inspire others to be inclusive of all students and WPI community members,” he says.

“We in Physical Education, Recreation, and Athletics want it to be a welcoming and inviting place,” says Harmon. “Our department wants to visibly demonstrate our commitment to diversity and inclusion.”

As Seeto says, all the discussion instills a sense of unity throughout a diverse community. “I am proud of who I am and where I come from,” he says. “To use that pride to help the campaign meant a lot to me.”