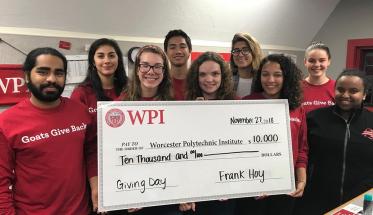 WPI’s third Giving Day brought a festive atmosphere to the Rubin Campus Center on November 27 where Giving Day Ambassadors and members of student groups celebrated donations, gave away T-shirts and goodies, and even surprised the crowd with WPI’s mascot Gompei. With over 1,250 donor contributions in 24 hours, Giving Day efforts raised over $300,000 for WPI. 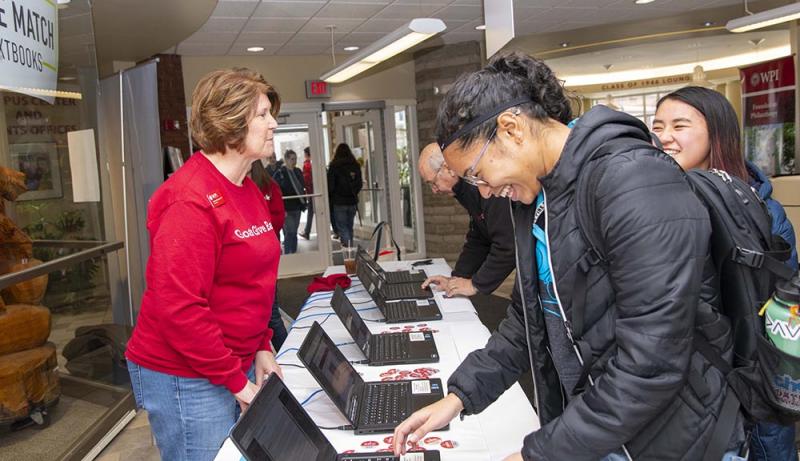 The Rubin Campus Center was buzzing as donations
were made throughout Giving Day.

Giving Day is a nationwide event held the Tuesday after Thanksgiving, and acts as a kickoff to the national charitable season of giving. At WPI, Giving Day is a reminder of all the ways students, faculty, staff, alumni, and friends thrive as part of the WPI community. But it’s also a nod to the university’s culture of philanthropy. Emphasizing the act of giving over the amount given, Giving Day connects people with a donor goal instead of a dollar amount.

Compared to the 2016 totals (Giving Day is every other year) of more than 1,300 individual donations giving approximately $300,000, this year’s totals brought in more money but with slightly fewer donors. The day fell just shy of its goal of 1,500 donors, but is considered a success in donations, awareness, and pride.

The 24-hour event involves the entire community. The Senior Class Gift Committee worked throughout the day for their efforts, and this year more than 150 staff and faculty members made donations. In addition to the activity in the campus center, students were busy in the call center. Giving Day was even acknowledged off campus as companies with WPI alumni employees got in on the action and held Giving Day Goat Rallies.

This year, the Annual Giving and Advancement teams introduced new approaches to community involvement that encouraged people to spread the word and to have fun while they were doing it. Giving Day Ambassador Toolkits were easily accessible online and offered tips, social media ideas and resources, and ready-to-go email and video templates to share with networks that made it simple to let others know about the day. Tracy Baldelli, associate director of annual giving, and Judith Jaeger, executive director of advancement events and communications, looked forward to seeing how the toolkits were used and the results they return.

“That’s really what the day is about: these conversations about philanthropy and why it’s so important at WPI, making giving to WPI a habit, a tradition, and part of our culture here.” -Judith Jaeger

The Student Alumni Society sponsored “Notes and Floats with Grateful Goats,” which encouraged students to share stories about how WPI’s legacy has helped them and to thank those who gave. After filling out notecards, the grateful goats were then treated to root beer floats.

As with other Giving Days, donation challenges helped spur a spirit of philanthropy (and a little competition) to meet donation goals. Challenges to the Greek community and to recent graduates also raised the stakes. With more than 450 individual donations, the Greek Challenge blasted past its 200 donor goal and unlocked an additional $25,000 matching donation. The Graduates of the Last Decade (GOLD) Challenge surpassed its donor goal and the more than 230 donations unlocked an additional $10,000 match. 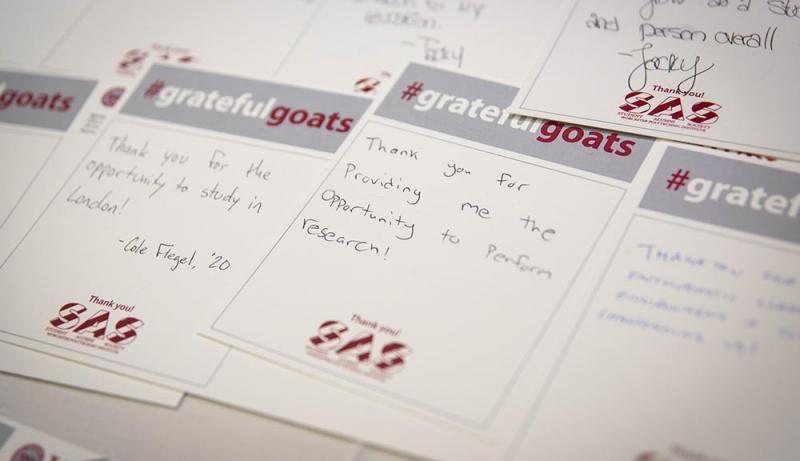 What opportunities have you been grateful for at WPI?

Continuing a previously established tradition, Frank Hoy, Paul R. Beswick Professor of Entrepreneurship in the Foisie Business School and director of the Collaborative for Entrepreneurship and Innovation, continued his tradition of offering a $10,000 match if 150 employees made Giving Day donations.

“How can we ask alumni and others external to WPI to provide gifts,” he says, “if we do not show that we believe enough in what we are doing to make our own contributions?” His motivation goes beyond that. “Many people are unaware that the tuition students pay does not cover the full costs of their education,” says Hoy. “More alarming, a large proportion of students, alumni, and even WPI employees do not realize that WPI is a nonprofit organization. Our ability to continue the high quality of education, research, and service we deliver is contingent on donations.”

Technology offered a boon to Giving Day with easier processes for donors. Donors were again able to contribute to a specific area of the university—a club sport or a specific department, for instance. Online donations, Twitter updates, and mobile-friendly donation forms made the process easier. This year, the team also began collecting analytics, and will use the information to provide direction on future campaigns. “We don’t want to make decisions that are based on anecdotes,” Jaeger says. “We want to know what works.

“We saw many great conversations on social media among alumni and in person in the Rubin Campus Center among students," she says, "students encouraging other students to give to WPI, to support the Senior Class Gift … as well as faculty and staff encouraging each other to give. That’s really what the day is about: these conversations about philanthropy and why it’s so important at WPI, making giving to WPI a habit, a tradition, and part of our culture here.”