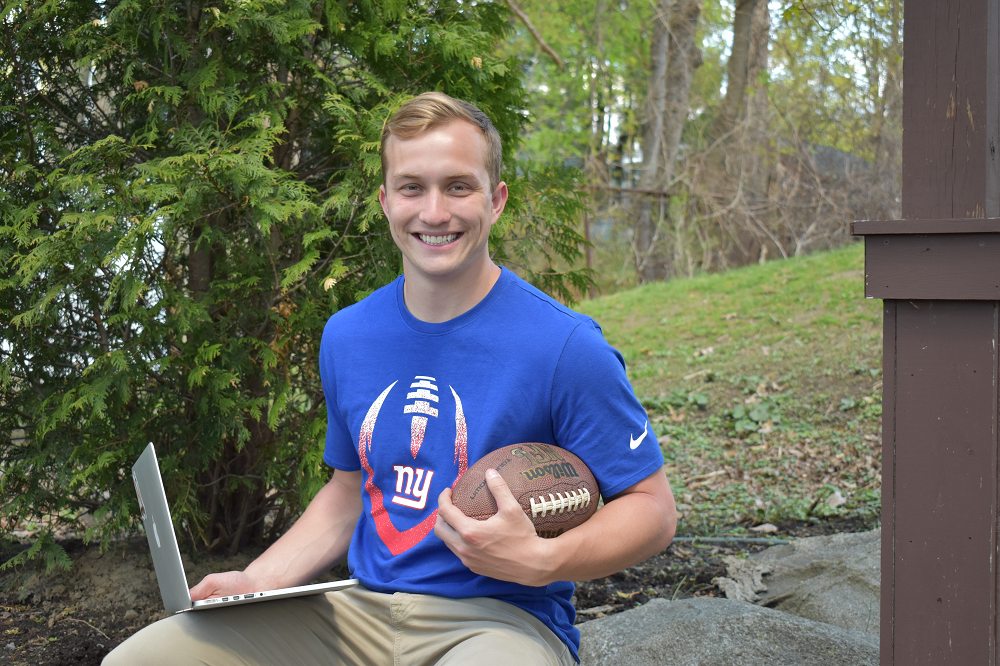 Clark Ewen is heading to the N.Y. Giants to do data analysis for the team.

As data analytics take sports by storm, 2020 grad will help team put its data to use

For the four years that Clark Ewen played football for WPI, the electrical and computer engineering major dreamed that he would one day work for a National Football League team, though he didn’t think it actually would happen.

The 2020 graduate and wide receiver for the WPI Engineers is joining the New York Giants. No, he won’t be on the gridiron; Ewen has retained a full-time, paid internship as a data analyst for the Giants, making sense of the fire hose of information the team brings in during every game, helping them play smarter and more efficiently.

“It’s definitely a dream job,” says Ewen, who minored in business. “It’s a once-in-a-lifetime opportunity. I get to blend my technology background with my love of football. It’s really cool.”

Ewen, who grew up in Arlington, Mass., started playing football when he was 9 years old. He played at Arlington High School and was recruited by the WPI Engineers as a wide receiver. He simply doesn’t remember a time when he wasn’t playing football.

“I also always knew I wanted to do engineering, so WPI was a great fit academically, too,” he says.

But to go to a professional team? Well, that seemed like too much to hope for.

Ewen, who hopes to extend his internship with the Giants, will combine his experience playing football with his technical skills to help the team organize and query a massive amount of data to discover useful information about their own players and opposing teams, and inform decisions on and off the field.

There’s been a massive influx of data going into college-level and professional sports. Professional football teams, for instance, might get 100,000 data points for every game, That data includes player stats, like yards run and passes completed, as well as how fast each player is running, where they are on the field at any given time, play calling, when teams tend to run the ball, and how teams react in different situations.

“Data analytics is exploding,” says Chris Robertson, head coach of the WPI Engineers. “Even at WPI, we have a relatively new data analysis program. It’s everything right now.”

“There is an increased focus on data in football,” says Ty Siam, director of football data and innovation for the NY Giants. “We need people who can understand it and also speak about it to non-technical audiences, like coaches and scouts. We get a ton of data for every game and about every player in any given season. The challenge is first and foremost to come up with good questions to apply to the data, so you need people who can work with the data and who know the game well enough to come up with those important questions.”

With the need to compile, understand, and use data, Robertson says he wasn’t too surprised when a representative from the Giants called him asking about graduating seniors who played the game and studied computer science or electrical and computer engineering. And he didn’t hesitate to suggest Ewen.

“It makes complete sense,” the coach adds. “They didn’t just want technical people but people who have an understanding of the game, as well. Clark is the perfect person for what they wanted. I felt the guy from the Giants light up when I talked to him about Clark.”

Siam says they reached out to several engineering schools looking for potential interns who were technically minded and had a strong understanding of football, though he declined to say how many 2020 interns they hired in total.

“We do want to build a pipeline of candidates, like Clark, to keep going,” says Siam, noting that Giants general manager Dave Gettleman is from the Boston area and wasn’t surprised they found a great candidate at WPI. “We’re impressed with the quality of student athletes there. I think Clark has a unique skill set between his computer systems knowledge and also his leadership role on the WPI football team. That made him a compelling candidate.”

Robertson says he anticipates the Giants will call him again, and it’s an opportunity he’s been talking about with high school juniors and seniors.

The coach noted that he’s excited that Ewen, who he describes as highly competitive, smart and analytical, is getting this kind of opportunity. “How cool is it for a Division 3 college football player to say he’s going to work for the N.Y. Giants? It’s one in a million, really,” says Robertson.

For Ewen, though, landing his dream internship was all in the preparation. Playing football gave him the discipline to get the job done, not just on the field but also in the classroom.

“At WPI, they teach you about solving problems,” he says. “It’s not dependent on your major. WPI does a good job of preparing students for whatever it is they want to do. For me, I could always learn a new programming language, but it’s another thing to learn how to problem solve and go about making good decisions. I’m a data-driven person. That gets engrained in you at WPI. And I think data is the future of sports in general.”

Ewen will begin working with the Giants as the team gathers for pre-season training.