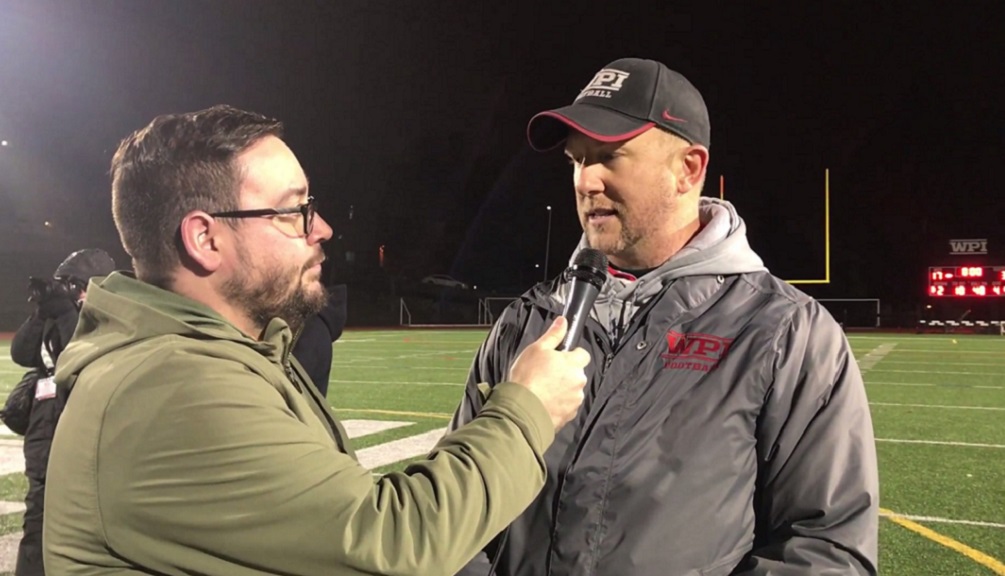 Chris Robertson has served as WPI’s head football coach since 2010. The team finished the 2017 season with a 9-2 record, tied with the 1992 team for most wins in a single season. During the last four seasons, Robertson’s teams have compiled a 26–16 record, culminating with a victory last Saturday in the New England Bowl over visiting SUNY-Maritime, 17–3. The victory marked the team’s first-ever postseason win in school history, dating back to the beginning of the football program 128 years ago.

The Daily Herd sat down with Robertson to discuss his expectations heading into the season, the significance of reaching this milestone, and his thoughts on next year’s team.

What were your expectations entering the season?

Expectations can be measured by both the outside and the inside of any program. From the outside looking in, wins and losses are the most obvious measure of the success of any team. We were 7­–4 two years ago and 6–4 last year. We have developed this program into a solid football team, and entering this year we did not exactly know what to expect—but obviously we wanted to have even greater successes than previous years. I knew we had a good defense, a good run game, and a couple of highly capable players fighting it out for the quarterback role. From the standpoint of what we had entering the season, I had high expectations. I never told the guys that we should be 8­–2 or 7–3 this year. Instead, we focused internally on the process and breaking down winning into a daily occurrence, taking each game one by one. After the Springfield game, we were 2–2 and at that time I knew we could be really good. From that point on, we challenged players and coaches to give more of themselves each day to ensure that 2017 could be something special. And we did just that, winning seven games in a row by an average score of 35–10, including a postseason victory over a 9–1 team who had average over 40 points per game throughout the season.

When did you know you had a special team?

When you take a look at the two losses we had, they were to two very good teams (RPI and Springfield College), who both made it to the NCAA Division III playoffs. It was just a matter of making corrections and protecting the football on offense and not giving up big plays on the defensive end. So, I’d say after the Springfield loss we all knew that if we did the right things, we could be really good.

The loss to Springfield was the turning point of the season?

It was 100 percent after the Springfield game. Everyone, from the coaching staff to the players, demanded more from each other and there was a higher level of accountability. It was like we kicked it up 10 notches. There’s a lot of preparation during the week leading up to games on Saturday. The analogy I like to use is that practice is a time when where we’re putting hay in the barn. And after the walk-through (practice) on Friday, the hay’s in the barn, the work is done, and then it’s time to go out and have some fun.

There have been a lot of really talented WPI football teams over the years. The undefeated 1954 team comes to mind as well as the 1992 team. Do your players understand the legacy of the teams that have come before them?

Without a doubt. I talk to the team about those teams that have come before them so they understand. They’re aware of our loss to Rowan University in the NCAA Championships in 1992. And I told them flat out that it’s been 128 years without a postseason victory for WPI football, and that this was our chance to be in the conversation with some great teams. It was not good enough just to be there. We were determined to go in and win that football game.

Is it too soon to be thinking about the 2018 season?

Pretty soon we’re going to start talking about next year and see what kind of team we have. We have some key seniors who will be graduating and we’ll have conversations with younger players and challenge them to step up and prove themselves during spring practices. Each year’s team is different, and you have to evaluate everyone. It’s the coaches’ jobs to prepare these guys for battle on Saturday afternoons. As long as everyone is accountable and working hard and everyone puts team above self—then we’re going to be successful.