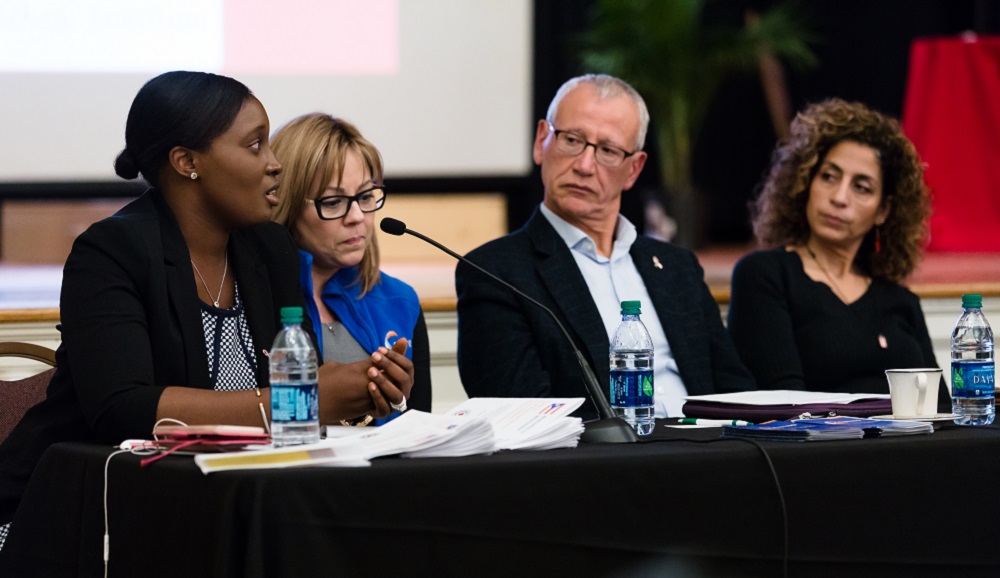 On Nov. 15, the Office of Multicultural Affairs hosted a community forum at the First Baptist Church that examined the depth of the catastrophe wrought by Hurricane Maria in Puerto Rico. Panelists and attendees highlighted the ways the Worcester community is coming together to help those impacted by the hurricane in the Worcester region and in Puerto Rico.

“There are a number of students from homes in Puerto Rico and the impending exodus of Puerto Rican Americans to the mainland is happening,” says Simmons. “Worcester is one of those places preparing for an influx.” She decided that expanding the conversation to include stakeholders in the Worcester community would enhance the potential impact while also raising awareness among those who want to help but are unsure how to do it.

The evening included a reception with light refreshments and music, an artistic performance, a panel of community, academic, and government speakers, a Q&A from the moderator (Simmons), and then discussion with the audience.

In her introductory remarks, Linda Looft, assistant vice president of government and community relations at WPI, noted the helplessness many people are feeling. “We have all been touched in one way or another by this catastrophe,” she says. “Many of us are searching for ways to support the relief and activities. We are eager to learn how to do more and how we might effectively work together to support Puerto Rico and its citizens as they work to recover from this unimaginable devastation.”

Sheyla Rivera, artistic director of AS220, a nonprofit community arts organization in Providence, R.I., noted how she appreciated people mobilizing to support Puerto Rico, and also how difficult it is to understand the scope of what’s happening there without first grasping the island’s culture and relationship to the US as a colony. Rivera later gave an artistic performance inspired by Puerto Rico.

Jeffy says her organization is seeing the direct result of Maria in the influx of Puerto Rican Americans who are beginning to resettle in the Worcester region. “We are passionate about this group and seeing what we can do for folks affected by the hurricane,” she says. “It’s good to come here and help spread the word.”

Velazquez spoke as a panelist with both professional and personal connections to Puerto Rico. Velazquez came to the Worcester region from Puerto Rico as a teenager and knows firsthand how overwhelming the transition is. When you add the urgency of a hurricane to the transition, she says, people arrive needing information and assistance quickly. “We are excited about this partnership and being able to help them navigate the system,” she says. Velazquez says ensuring children have access to education is crucial, so the efforts from Worcester colleges and universities will help pave the way. “They have a better chance at succeeding in America,” she says. “It makes me excited for the future.”

The night included an opening reception with light refreshments and music of Puerto Rico. Laura Cintron, a first-year WPI student, is from Puerto Rico and although her immediate family is not on the island, she has many relatives and friends still living there. This night, she says, gave her an opportunity to hear what the Worcester community was doing to help. Cintron, who came with two friends, was also just curious about what the conversation would include.

“We did this to provide an opportunity for an outlet for people who are feeling frustrated and are without an opportunity to express themselves beyond Facebook,” says Simmons. “It helps people feel validated.” Focusing on the humanitarian crisis would also sharpen the attention on how people are impacted by changing weather patterns around the world and what kinds of challenges and crises that can bring, she says.

Bonnie Walker, WPI’s executive director of diversity and inclusion strategy, says the event brought together many sectors for a much needed common conversation. “There have been a lot of natural disasters in recent years that have impacted different parts of the country and the world,” she says. “We’ve had siloed conversations about these tragedies across WPI as they have unfolded. Given the tumultuous national climate, it’s important to come together as a campus and as a larger Worcester community to talk about it all so we are not so siloed.”

The panelists addressed some questions that ranged from “What are the Worcester-based community efforts that we can identify that will help move Puerto Rico forward?” to “How is the humanitarian crisis in Puerto Rico different from Texas, California, Florida, and the US Virgin Islands?” Audience members were also able to ask questions at the end of the event.

Through several interpretations, the audience and panel examined the complexities of Puerto Rico and how and what the political system, economy, and infrastructure will need to recover. “I love all the elements of tonight,” says Walker. “The art, the music, the politics, the government officials, and the WPI representatives in one place.”

Simmons wanted to make sure everyone enjoyed the event, but also that they left feeling empowered by the information. “I want them to leave and say, ‘I had a great evening, and now I know where to volunteer, where I can donate, and I know what is happening.’”