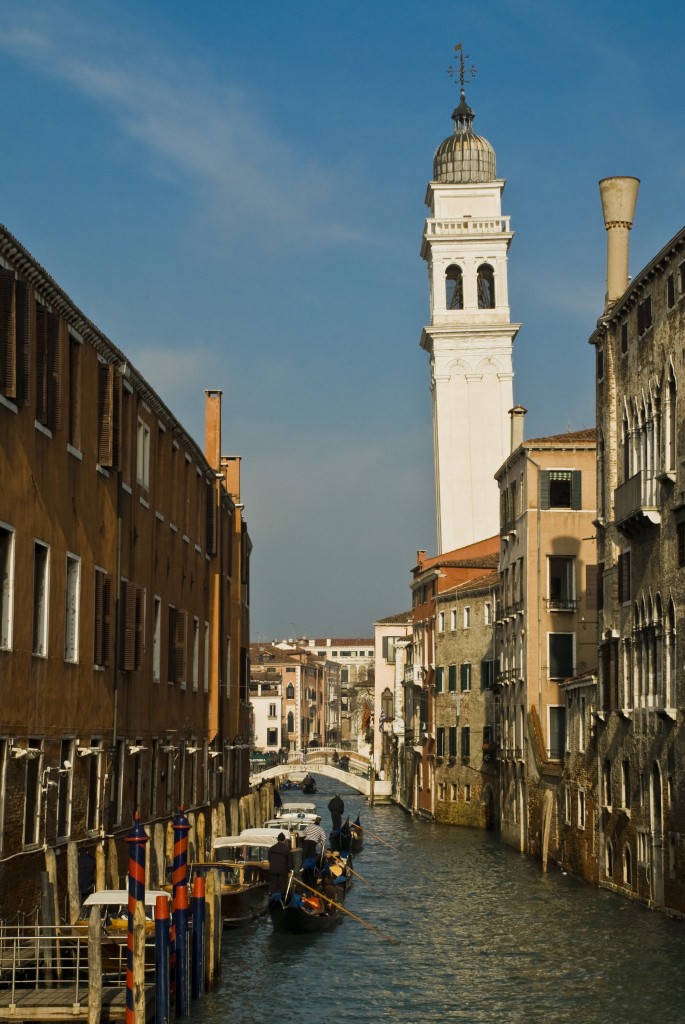 WPI’s Venice Project Center, now in its 25th year, stands apart from other project centers for a few reasons. One, it’s one of the oldest. Two, it’s led by a native Venetian who is also a WPI graduate, Professor Fabio Carrera. And three, it’s sited in a unique locale — a series of small islands — with no cars, plenty of canals, and bridges galore.

Carrera moved to the U.S. from Venice in 1979. His Venetian ties to the people and the language have been invaluable in leading the Venice Project Center for more than two decades, offering an exclusive perspective of the city.

“Fabio opens doors that the average tourist wouldn’t even know existed,” says Kyle Miller ’09. “The best example is the opportunity to go rowing through the canals in a traditional Venetian rowboat … there are few experiences in this world like rowing down the Grand Canal at night, peering into the palaces illuminated by their Murano glass chandeliers.”

The Venice Project Center will be the topic of a Brown Bag Lunch on Thursday, Feb. 6, in the Hagglund Room, Rubin Campus Center, where Carrera will give IQP students a perspective on the project center work and how it’s evolved over the past 25 years.

“It’s small,” Carrera says of his native city, “not much bigger than Central Park.” But Venice delivers big with vast opportunity in terms of student engagement and in terms of giving the city data it can utilize for years to come.

In the 1990s, the Venice Project Center earned acclaim among the Venetian community with a series of projects it did on the canal system. One, the establishing of a bridge maintenance system with a multimedia catalog, was the absolute first of its kind for the city, Carrera says.

“It resulted in powerful data collection and measureable impact for the city,” he says, looking back. “They hadn’t been maintained for long time.”

Teaming up in part with the United Nations Educational Scientific and Cultural Organization (UNESCO), for many endeavors, the project center also established the first-ever scientific measuring of canal currents; studied traffic flow in the canal; gathered data on cargo transportation; and created a geo-spatical reference framework for the canal system.

The canal work helped establish a level of trust for future Venetian partnerships, Carrera says, as well as a database the city can use to help guide its decision making for many years to come.

“We are the only ones [among students who come to Venice] that can say we left Venice better than we found it. Many just go visit museums and take classes,” he says.

WPI’s contributions to Venice go far beyond the canals, and evolve in accordance with current technology, Carrera says.

“We are the only ones that can say we left Venice better than we found it.”

The Venice Project Center set up Venipedia.org, for example, a Wikipedia-type online resource site for the city. In addition to pointing out fun facts — like that the city is the cruise ship capital of the Mediterranean — it comprises some 17,500 articles on Venetian topics related to science, nature, infrastructure, and the economy and society, to name a few.

The WPI Venice Project Center was also the first to catalog and map inscriptions, tombstones, and decorations embedded in Venetian church floors, according to Veniceprojectcenter.org.

The project center also created Dashboard, which can be viewed on the project center website, counting the numbers of planes in the airspace, boats in the water, and tourists arriving, in real time, as well as water currents and other data. “We keep a log of it, compare how many Venetians there are coming into port as opposed to tourists,” Carrera says. “People find it very useful.”

Miller says project opportunities offer something for everyone. “Maybe you’ll climb some bell towers to capture sights and sounds from the top. Maybe you’ll travel around the lagoon cataloging public art on remote fishing islands.”

And opportunities are always expanding. For example, the Venice Project Center will create more apps in the future, Carrera says, such as VeniceNoise.org, where anyone can record and add to data of the city’s noise levels.

Overall, Carrera says project centers, especially those overseas, “teach the impacts of science and technology on the world. It removes the blindfolds in the black-and-white world of engineers.”