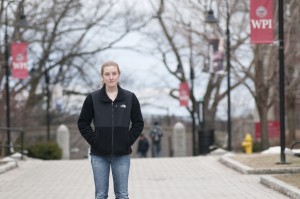 Sprinter Moves between Tracks with Ease

For Caroline Allen, switching between track and field and the motorcycle racing track is an easy move, because it represents something of a perfect balance. Long-sprinting satisfies her need for speed, while her particular type of motorcycle competition demands finesse and poise.

The mechanical engineering major, who was part of the indoor 4×400 meter relay team that broke the WPI record in 2012, says she has been riding motorcycles since age 5, when her father would run behind her as she rode a 50cc mini-bike around her backyard. 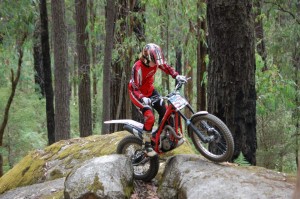 She eventually followed her father (and older brother) in pursuing a sport called motorcycle trials, which involves riding a specially designed motorcycle over obstacles consisting of rocks, logs, hills, riverbeds, and other terrain.

While speed is a factor, the overall goal is for riders to traverse a series of sections of obstacles from start to finish without putting their feet on the ground. Each time a foot touches down, points are assessed. In the end, the rider with the lowest score wins.

“When most people think of motorcycle racing, they think of high speeds,” Allen says. “Motorcycle trials breaks that stereotype, as it is not just about holding the throttle wide open; rather it is about balance and technique.” She explains that riders often remain in first or second gear through an entire section. 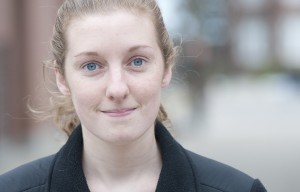 Allen’s trials résumé, which includes winning the 2011 National MotoTrials Championship for the women’s class, is already impressive. At 14 she started riding in the women’s class of the US National MotoTrials series, which has several rounds of competition across the country. When she was 16, she earned a spot on the US women’s team for the Trial des Nations, which she describes as “the Olympics of Motorcycle Trials,” with teams from all over the world competing.

“I have been on the US Women’s Trials des Nations team for the past five years, competing in Andorra, Italy, Poland, and Switzerland—where our team placed fifth overall and tied for our best finish ever.
Now finishing up her junior year, Allen says she was drawn to mechanical engineering at an early age. “I grew up watching my dad work on motorcycles, which sparked my interest in how things work and ultimately led me to study mechanical engineering.”

She recently completed her IQP in Australia. The project involved establishing the sustainability of the Banksia Gardens Community Center’s science education program. It was a rewarding experience, she says, because her team’s efforts will help to keep the science program running for future generations.

After graduation, Allen says she hopes to pursue a career in mechanical engineering—while continuing to ride trials and run for fun. “My dream job is to work for a design consulting firm. I think it would be exciting to be able to design different types of products and have a role in each step of the process, from brainstorming to creating a prototype.”