When thinking of WPI, one might be excused for thinking solely of the world-class science and engineering education offered here in the hills of Worcester.

What might not be so apparent, however, is the vibrant arts scene on campus, an excellent example of which will be on display this week in the Institute’s Little Theatre, located in the rear of Riley Hall.

The 31st annual New Voices Festival, scheduled for four nights this week, April 10 through 13, is important in several ways.

In addition to offering a venue for several area playwrights to have their works produced and shown before local audiences, the festival is notable for its longevity.

According to organizers, the New Voices Festival began in 1982, and its 31 year run makes it the longest-lived annual collegiate showing of new and original works in the country.

The festival was founded by Susan Vick, professor of drama and theatre, and director of the theatre program. 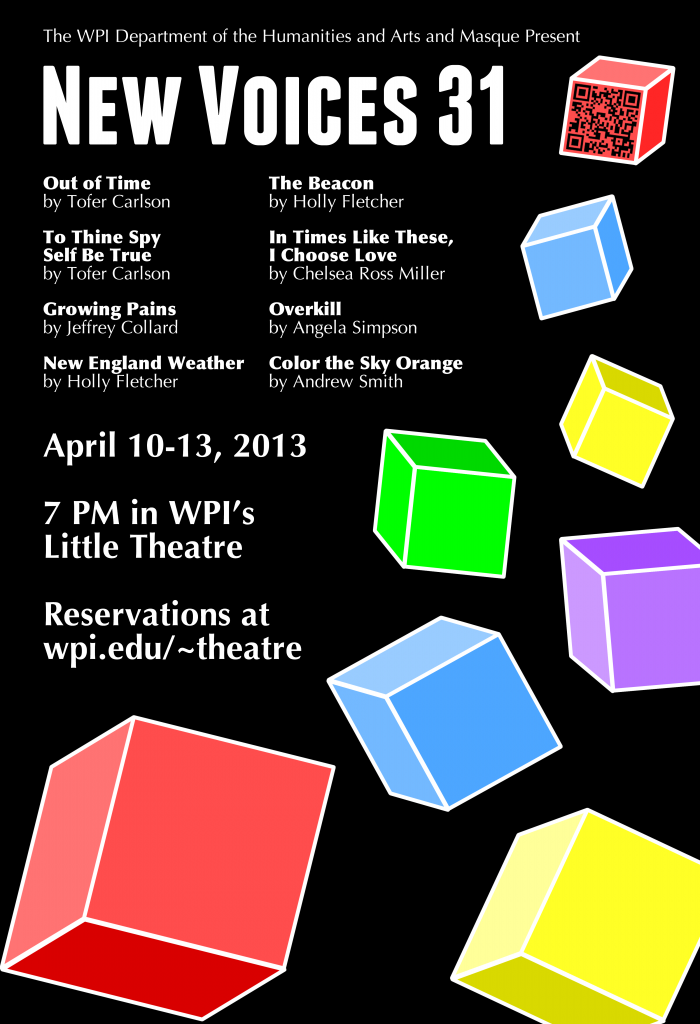 This year’s selection of eight plays written by six playwrights represents the best of the nearly 100 selections submitted for this year’s festival.

Of those six, four are students and two are alumni. Three of the authors have never had plays performed at New Voices.

There are no strict requirements for dramatic form in the Festival – everything from monologues, single acts, and multiple acts—even musicals—are eligible for inclusion.

Asked if the presence of an energetic arts scene at WPI is a complement to the more technical aspect of education here, Andrew Smith, one of those with a piece scheduled for performance this week, wholeheartedly agrees.

“Arts at WPI are essential, not just as a supplement,” Smith says. “Society advances through both the arts and the sciences, and you cannot have one without the other.”

New Voices 31, in particular, is showcasing pieces that show a range of concerns and approaches to the dramatic form, Smith says. “The plays span a wide range, from comical plays about spies and elves, to dramatic pieces about growing up, experiencing the world and pushing forward.”

His own work, “Color The Sky Orange,” is a stirring monologue in which a young man catalogs the ways in which people in his life have moved on, succeeded or not, loved, died, and even disappeared into the mists of what an older character might simply characterize as “time.”

The large body of work scheduled to be performed at the festival is a boon to campus thespians.

He says there’s also something for students who want to get involved in the theater while also giving a doff of the cap to the college’s techie roots.

“It’s a unique experience for techies who get to work with new, interesting designs and features,” he said. “For example, last year we centralized the festival on projections and projection mapping, which allowed for dynamic scenery and a lot of potential for future expansion. This year, we purchased six glowing cubes that are being used to create cool new coloring effects in the theatre.”

Other works on tap for this week include a pair by Tofer Carlson: “Out of Time,” about time travelers who stumble into a masquerade ball while being pursued by enemies unknown, and “To Thine Spy Self Be True.”

Playwright Holly Fletcher also had two pieces accepted for this year’s installment of New Voices: “New England Weather,” and “Beacon.” The former regards an argument between the mythical creatures who control New England’s notorious weather patterns, while the latter is a drunken college woman’s monologue about her lonely walk to her boyfriend’s house, a trek haunted by the specter of possible violence lurking in the darkened streets.

Other plays to be performed at this year’s festival:

“In Times Like These, I Choose Love,” by Chelsea Ross Miller

Performances begin at 7 p.m. and are available on a first-come, first-served basis at wpi.edu/~theater.