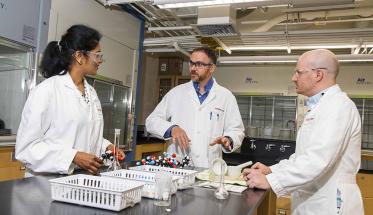 Engaging curriculum lets students think like scientists, even with the occasional failed experiment

When chemistry professors overheard students boast about rushing through chemistry labs, they knew something had to change. Learning about chemistry shouldn’t be a slog—it should be about the adventure of discovery.

Those reactions just confirmed what faculty had been grappling with for a while: the curriculum’s rudimentary instructions of canned lab experiments weren’t helping the students learn. More often than not, scientific success only comes after many starts and stops and even a few flat-out failures.

“Our chemistry curriculum was a little long in the tooth,” says Drew Brodeur. “It was not effective, and we wanted it to fit into the WPI Plan.” To do that, a committee formed two years ago to address some of the desired changes. With input from committee members Brodeur, Arne Gericke, Ron Grimm, Destin Heilman (chair), and Uma Kumar, modifications were discussed, implemented, tested, and eventually voted on and approved by department faculty.

The department wanted to find a curriculum plan to keep students engaged at the bench, thinking of new ways to make experiments work, accepting and overcoming failure as part of the scientific process, making connections they didn’t understand before, and gaining a deeper appreciation for actual research. The distinctions are important to understand, says Heilman. “It’s not only about teaching them chemistry better,” he says. “It’s about teaching them how to approach science.”

But a major transformation of the curriculum for the three largest courses—Chemistry 1010 (Chemical Properties, Bonding, and Forces), Chemistry 1020 (Chemical Reactions), and Chemistry 1030 (Kinetics, Equilibrium, and Thermodynamics)—was only part of the methodology as the team discovered. Other things came into play, including registration, space, equipment, and other chemistry faculty members with whom to coordinate and negotiate.

The overhaul began with a change to an atoms-first approach, which reordered the lectures, labs, and experiments. The labs were now designed with projects as a contiguous series, so students design the experiments to advance the work. The approach required additional time and effort for the faculty, though no additional new resources. But the use of in-place resources increased.

Students now have two meetings a week instead of one, and they are in labs for six hours instead of three, so lab space is stretched to include underused lab spaces. The labs are no longer coupled with a course, so that creates software-based registration complications and headaches, but is actually easier for faculty and students. While additional lab equipment isn’t necessary, some pieces are being used more frequently, potentially creating a faster wear-out.

"This is less of a set curriculum and more of a platform to teach the scientific process in a chemistry context.”  -- Destin Heilman

There have been adjustments along the way as students and faculty adapt to this new curriculum. Students must cope with the frustration of experimental failure and setbacks, something the previous curriculum prevented. Faculty members had to stop themselves from showing students what to do to soothe building frustration.

“[Before the changes] students were coming in and doing the protocol mindlessly,” says Heilman. “They got really good at executing protocol and leaving. So we took the protocols away. This is less of a set curriculum and more of a platform to teach the scientific process in a chemistry context.” In short, the extra effort has reaped rewards for faculty and students.

The benefits extend beyond classes. “I am hoping this will help them in the upper-level courses as well,” says Kumar, so students will get comfortable with not always getting the right answer. The approach also fosters collaboration. Now the faculty heard new conversations about the labs—they heard talk about how to do something and tactics that were tried. Students were talking about science, learning from each other, and not simply slogging through.

“This is a much harder way to teach, but it’s more fulfilling,” says Heilman. For students and faculty members, the new conferences and lab structures maximize the social interaction that encourages peer learning. In one instance, a team demonstrated essential creative thinking by making their own balance to weigh an unknown sample, says Kumar. Their out-of-the-box approach was impressive. “They are quite creative,” she says.

Brodeur, Heilman, and Kumar are taking the new curriculum to the American Chemical Society’s national meeting in August to explain the approach and its positive results. Heilman also discussed the changes at the Institute on Project-Based Learning this summer as well. “There’s transferability to other schools,” he says. “It doesn’t necessarily take more resources or equipment to teach chemistry this way, just more time and faculty interaction.”

Although there’s some talk about adjusting other chemistry courses in this way, there are no plans in place. For now, seeing the students gain some life experience in the labs is exciting. “I hope they will have a much better feel for a career in science and life in general,” says Brodeur, “and that time spent to success is greater than you thought.”