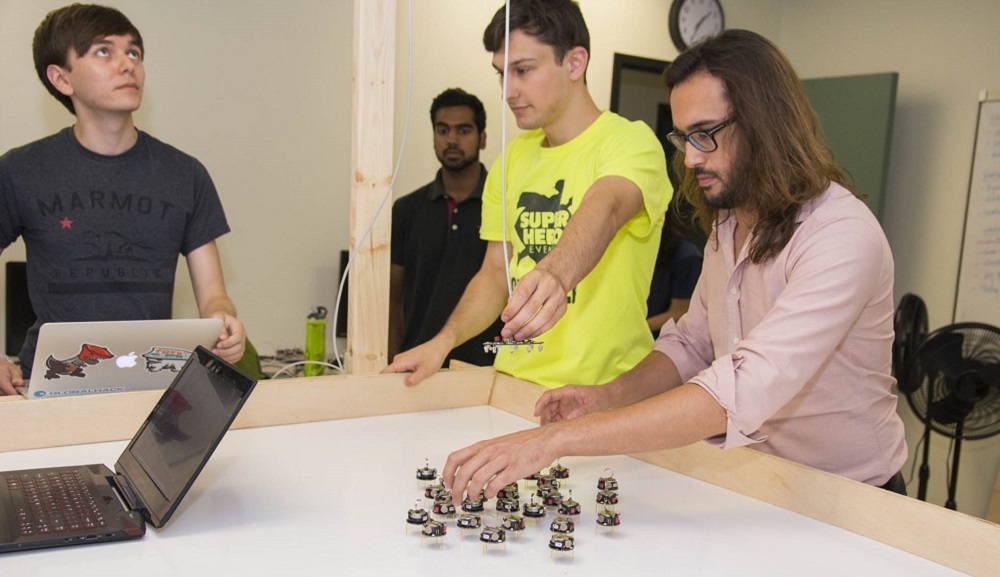 Taking the World by Swarm

At first glance, the tiny robots (each roughly the size of a quarter) gathering on a smooth specialty surface in Carlo Pinciroli’s lab might not seem like much. But the plan is for them to be able to aid humans in areas ranging from disaster recovery and search-and-rescue to planetary and underwater exploration and de-mining war zones.

And they’re just getting started.

“It’s the idea of doing a lot with very little,” explains Pinciroli, professor of computer science and robotics, “and doing things that are smart with robots that are not.”

That’s the core concept behind swarm robotics, Pinciroli’s area of expertise. Inspired by nature and the ways ants and other insects participate in swarm behavior, swarm robotics involves the collective behavior and coordination of multiple individual robots, known as swarms, to complete tasks bigger than themselves. The swarms cluster together as they get closer to each other and practice a self-sustaining behavior to keep themselves and the other robots safe from obstacles and hostile environments while completing their assigned tasks.

While mimicking nature for robotics might seem like a one-way street, Pinciroli says that’s not the case. By reapplying what they know from biology and swarm behavior to the robots, he says, scientists and engineers can also verify what they think they know about biology to be true,and make adjustments as necessary.

To Pinciroli, one of the most interesting parts of his work is drawing inspiration from nature, and even using it to create something of his own. “Sometimes I just try to invent something for which I haven’t found a biological parallel, and then make systems and algorithms to achieve things that people might not think are possible.” After a pause, he adds with a laugh, “And it’s fun, most of it’s just fun.”

The work of Pinciroli and his students is in its earliest stages now—ultimately, they’ll be able to create systems that can help humans complete massive tasks safely and efficiently. “It’s tech that could open doors that otherwise might not be opened,” he says. “Whatever we show now looks simple, but in fact, even the simplicity is hard to obtain.”

Every time you think you’ve heard the last way swarms can help impact the world, Pinciroli adds another impressive example to the list. Think disaster relief, search and rescue, coral reef restoration, military de-mining in war zones, planetary exploration, and even nanotechnologies—the idea of injecting tiny robots into humans that can attack diseases.

“Many of these things are potential future applications,” he says, and although some of them might be more of a pipe dream for the time being, “they’re all things that can be done in the field of swarm robotics.”

In his NEST (Novel Engineering for Swarm Technologies) Lab, Pinciroli and his students are currently in the throes of several projects, including making swarms more aware of their surroundings and designing algorithms for task allocation, self-assembly, and pattern formation of the swarms. He is developing Buzz, a programming language designed specifically for swarms, and he and some students are also working on creating an app that would allow users to specify how a room should be organized, then have robots rearrange objects to the user’s liking.

Pinciroli’s work isn’t just limited to campus. In late July, he served as technical co-chair at the 2017 Conference on Adaptive Hardware and Systems in California, organized by NASA and the European Space Agency. As technical co-chair, he played a role in helping define focus points, select papers to highlight, and put together the program for this year’s conference.

“It’s a conference that focuses on systems that can adapt to hostile conditions or different environments they weren’t initially designed for,” he explains.

It’s clear that the possibilities of how swarm robotics could be implemented to benefit society today are endless, and that thought can be a bit overwhelming. Pinciroli isn’t affected by that, though—his passion and enthusiasm for robotics is evident in every project he works on.

“There are lots of ideas going on,” he says, “and we’ll tackle them all, one by one.”