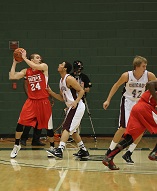 The WPI men’s and women’s basketball teams will play home games Saturday, Feb. 7, and while the men’s game has implications for its NEWMAC ranking, both contests will help raise money to fight cancer.

The WPI Women’s Basketball team will kick things off at 1 p.m. in Harrington Auditorium, hosting Smith College in its annual “Play4Kay” game.

The 2015 Play 4Kay initiative is an opportunity for a nation of coaches to raise breast cancer awareness and funds for research on the court, across campuses, in communities and beyond. Since its inception in 2007, the Play 4Kay initiative has raised more than $3.8 million to support women’s cancer research.

Fans are encouraged to join the teams, event workers, pep band and cheerleaders in wearing pink to the game. According to WPI head women’s coach Cherise Galasso, between the shirts, balloons and decorations, the WPI gymnasium will be a “sea of pink” that afternoon. In addition, the WPI website will go pink in honor of the event.

The WPI men’s basketball team and coach Chris Bartley will team up with the American Cancer Society and participate in the Coaches vs. Cancer initiative at 3 p.m.

During the Engineers’ game against Babson College,  fans will have an opportunity to take part in fund-raising activities that will benefit the life-saving work of the American Cancer Society and its Coaches vs. Cancer initiative.

This game is key in having WPI claim first place and host the NEWMAC tourney.

In addition to the gate receipts, any donations collected on-site will be forwarded to the American Cancer Society.