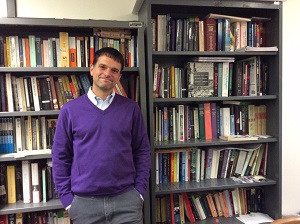 Sitting in his office – Salisbury Labs 26 – he is surrounded by creature comforts and work. His desk sits at ground-level. The window to his right gives him a dog’s eye view of the campus activity passing by. On his desk is a breathtaking photograph of his wife standing at the lip of the Grand Canyon. There are happy pictures of his children and there are books, poetry books mostly.

On this day, Jim Cocola is conducting office hours. “This is my 14-hour day,” he says with a laugh. “I don’t know what I was thinking when I was putting my schedule together, but there it is and here we are.”

Cocola is an assistant professor of literature, film, and media in the Department of Humanities and Arts; he teaches a wide range of courses in American studies, creative writing, film studies, and literary studies. He has also helped organize the film series and poetry series on campus.

What excites Cocola about humanities? “In a time when humans and machines are converging with greater and greater speed,” he says, “devoting attention to the immeasurable accomplishments of humankind can help us reflect on our collective and respective understandings of humanity, even as the parameters of that category become less and less clear. What better pursuit to tell us where we have been, where we are, and where we are going?”

Cocola’s current research focuses on ideas of place in American poetry and poetics. His book, Places in the Making: A Cultural Geography of American Poetry, is under contract with the University of Iowa Press, as part of “The New American Canon: The Iowa Series in Contemporary Literature and Culture.”

In the preface Cocola writes, “This study maps a range of modern and contemporary American poets who have used language neither for the sake of the poem, nor for the poet, nor for poetry itself, but for the large sake of evoking the world at various scales.”

In conversation he says, “This project was set into motion almost 20 years ago. I was home from my first year at college and was reading around the poetry section of my public library and pulled out a volume by John Ashbery called Self-Portrait in a Convex Mirror. I took it down to a sunken garden where I like to read and discovered that there was a poem set in upstate New York, near a graveyard, in late August. As I read, I too happened to be sitting in upstate New York,near a graveyard, in late August. That encounter resonated with me at the level of place.”

Cocola is also working on several essays about American poetry, a sequence of experimental poems, and a collection of fables. He also serves as academic director and poetry instructor in an   interdisciplinary course of study called the Clemente Course in the Humanities. Founded in New York City in 1995 by Earl Shorris, the Clemente Course is an eight-month night course in the humanities geared to low-income adults. 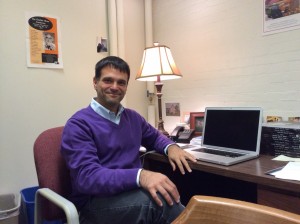 “Here in Worcester,” Cocola says, “we’re holding classes at the Elm Park Community School and the Worcester Art Museum. We had over 50 applications. We began the academic year with a class of students who range in age from 19 to 60. Many are immigrants or children of immigrants from the Caribbean and Central America, Southeast Asia, and West Africa.”

When asked if he has any advice to students who think that the arts and humanities don’t pay in an ever-increasing technologically advanced society, Cocola says, “Ask yourself what sorts of compensation you’re looking to secure. A strong education in the humanities and arts offers a foundation that will continue drawing interest for the rest of your life.”

And how do the arts & humanities coexist in such a world? “A roomful of sufficiently advanced robots would have plenty of time for works of beauty, critical insight, and emotional resonance,” Cocola says. “As for the rest of us — to quote Daft Punk –we’re ‘human after all.’”