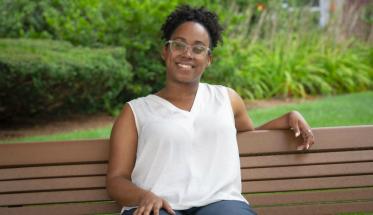 Providing the Framework for Reflective Discussions

When the Great Minds, Brave Spaces Speaker Series debuted in early 2018, series coordinator Christelle Hayles had no idea how it would be received. Now with its typically standing-room-only crowds, Hayles, a diversity and inclusion specialist in the Diversity & Inclusion Office, knows the series resonates powerfully on campus.

“Attendance is everything because it ensures institutionalization of the ideas,” she says, “but also because it’s the best way to infuse DEI culture change as naturally as possible onto any campus.”

Designed to promote thoughtful discussion and reflection on various issues, Great Minds, Brave Spaces builds on its precursor Can We Talk?—a similar series started by Bonnie Walker, former executive director of diversity and inclusion strategy. The discussions serve as a gateway for the WPI community to explore issues around diversity, equity, and inclusion (DEI) so that it is always a “part of the conversation on campus, rather than in addition to,” she says. Instead, there are actual shifts in understanding that make the community better in the short and long term.

Hayles wants the series to become another catalyst for making DEI part of the fabric of the university (also a Strategic Plan goal).

“DEI must become a part of the institutional brand and not simply because it looks good, or out of fear of public or legal shame or reprimand,” says Hayles. “Sometimes that calls for creatively thinking about what parts of the brand or image need to be stripped away or updated. Sometimes, as professionals, we need updates too.

“The hardest part of DEI work is that everyone genuinely and wholeheartedly believes that they know most of what they need to know about inclusion, and that is being a good person, however you interpret that,” she says. “But it largely operates on a much higher and complicated level. Great Minds, Brave Spaces provides a space where community members can take a deep dive into the nuances of themes like oppression, goodness, inclusion, etc. and the roles DEI plays in their individual lives.”

Many universities struggle to weave complex DEI issues into a campus culture so they are lasting and authentic. Hayles sees the Great Minds, Brave Spaces topics as good conversation starters for a more inclusive campus. “I work with each individual speaker to make sure the presentation is tailored to the WPI community in the broadest sense,” she says. “I try to bring speakers whose research or talking points are as inclusive as possible. I do not believe that speakers who are overtly controversial and divisive—and who tout violent or harmful narratives against any demographic—bring any value to the table. I subscribe to the notion of an inclusion that brings the most positive impact, because truthfully, that is what it is—not necessarily the idea that any and all sides of an opinion need to be heard or represented.”

On event day, Hayles rarely sits down. She greets attendees and extends a warm welcome and a personal appreciation for their presence. That deeper level of welcoming is something Hayles fine-tunes with purpose.

“The thing is, inclusion is important and not just as a theory, but practically,” she says. “If you don’t feel included at an event or situation, you are less inclined to be engaged or invested in the goings on of that event. If you are not engaged, you’re not participating with the people, the speaker, or the material and potentially missing out on not just information but on connection—and what is being part of a higher ed community or being a part of this social universe if you are not making those vital connections?”

Because STEM subjects are often so logical and clear-cut, some mistake them as neutral territory, but science is hardly neutral, she says. Hayles cites the HeLa cell line as an example: In the standard practice of the 1950s era, cells were extracted from a patient’s cancerous tumor without consent or compensation. The cells, taken from Henrietta Lacks, an African American woman, are the basis for many current-day scientific findings and have become one of the most important foundations in cell research. But underlying this science is a foundation in classism, racism, and sexism, she says.

These are the specifics of why Hayles is personally invested in the series. “STEM is in conversation with race, sexism, classism … it’s just not widely taught. That’s why Great Minds, Brave Spaces is important.” And while she is typically not one to boast of the success of her own work, the series is different. “I can say that I am very proud of what the Great Minds, Brave Spaces has become because I know I have worked my tail off to make sure it would be a success—and as a young professional of color who is a queer woman, that is huge for me for a lot of personal and professional reasons.”

Bringing together the specific themes of DEI and STEM and rooting the discussions in a basis of welcome and openness helps these events achieve packed attendances. “Topics that resonate the most are ones where the speaker lays out quite plainly the tie or connection between STEM and topics such as ability, race, class,” says Hayles. “This coming year’s topics will be similar, but we are hoping to bring more speakers focused on ability and religion, as well as other topics.”

The Science of Stereotyping and Implicit Bias

Negotiating Your Existence: The Intersectionality of Respectability Politics

This story is part of the Herd's Community Spotlight series, highlighting different members of the WPI community and their invaluable work across campus. To nominate a staff member for this series, email amduffy@wpi.edu.