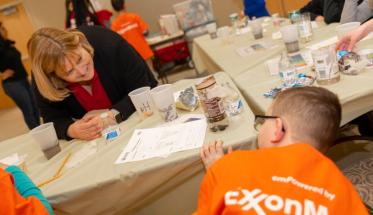 Building the STEM Pipeline to Make a Difference

When Sue Sontgerath came to WPI in 1984 ready to embark on her undergrad years, she never predicted the significance the university would have in her life.

Now director of WPI's pre-collegiate outreach programs, she considers WPI home and says the university gave her more than she ever expected. A solid mechanical engineering education provided a launching pad that helped her find her dream job—right back at her alma mater.

Sontgerath and her team coordinate and implement the academic year and summer programs (from Spark and Ignite to Camp Reach and Frontiers) and outreach programs (such as Tech Girls and Girls Who Code) that help introduce students to STEM and keep their engagement high. She is face-to-face with the young students providing a personal connection to WPI and to engineering.

But her dream job is only the beginning of the story for her. “I am proud of WPI and what they are doing here,” she says. “It’s personal. This community has supported me and given so much to me. I am keenly aware of that.” She met her husband (Heri) at WPI while he was a graduate exchange student (they were introduced when he was the elf at her sorority’s holiday party). And their younger daughter, Stephanie, is set to graduate from WPI this spring.

She came to WPI, in part, thanks to her dad’s rose-colored glasses. “My dad always wanted to be an engineer,” she says. Instead, he went into sales and his route passed WPI’s campus. “It was partially his dream to come here as well as mine,” she says.

As a young woman in the 1980s, engineering was considered a good option because companies wanted to hire women engineers. “Unfortunately, that wasn’t as much about your ability to be an engineer—it was more because you were a woman,” she says. 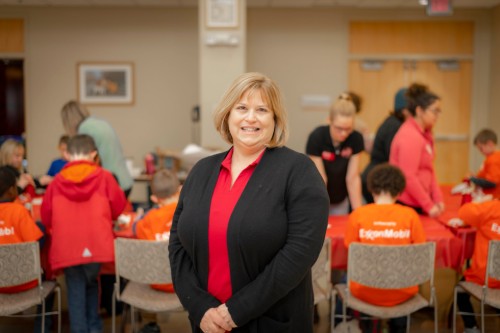 Still, she says, WPI offered a university where she could work on math and science and find a place as a young woman. “Most of the women were in one of the three sororities on campus,” says Sontgerath, who joined Phi Sigma Sigma. “Sorority life was a big part of being an undergraduate woman here at WPI for me because it gave you that place where you did have a family of women and you could be yourself.”

WPI offered opportunities (one of the first participants in WPI’s global projects program, she spent her IQP in Ireland), even if the gender balance wasn’t equal. “We knew the ratio existed, but I am not sure how much we paid attention to it or what that impact was for ourselves as students,” she says. “I don’t think we experienced significant microaggressions. Looking back, there were times we might have been judged differently or more harshly but in the moment we were here to do the work and be successful. We were good, strong students.”

It’s not lost on Sontgerath that she’s not an engineer in her career, but that’s not the point. “I’ve seen the value of an engineering degree in my own life,” she says. “It’s a foundation of engineering, of creativity, and of problem solving. The way you learn to look at a problem and learn to solve those problems is a foundation that’s transferable to anything. If engineering isn’t the end goal, it’s a strong jumping-off point for many things. I think anyone can benefit from that.”

After starting out in larger engineering organizations, she moved on to smaller companies and eventually took time off to raise her family, even as she and Heri relocated to Germany, and to San Diego with their two daughters. In 2002, she came to what was then WPI’s Office of Women’s Programs as a grant administrator to oversee a NSF grant-funded program to bring gender equitable curriculum into middle schools. In 2008, she moved into academic coordination for Camp Reach and noticed how girls downplayed their capabilities in science and math and shut themselves off from STEM careers. “It was a light bulb moment where I said we need to do something about this,” she says.

She routinely sees students now who were Camp Reach 12-year-olds when she first met them. “I know those kids,” she says. She recently bumped into a young woman, now a WPI junior, whom she first met at Camp Reach and then continued to see at WPI summer programs. “She looked at me and said, ‘You brought me up right.’ That makes it very worthwhile.”

Sontgerath says making a difference matters to her; “Someone recently said to me, ‘You have the best job.’ And I really do.”

This story is part of the Herd's Community Spotlight series, highlighting different members of the WPI community and their invaluable work across campus. To nominate a staff member for this series, email jgrimes@wpi.edu.