As she scales increasing heights in IT, Urvashi Tyagi ’01 is finding ways to help others do the same
Photography
Matt Furman

She was restless. It was 1999, and Urvashi Tyagi had landed what should have been a plum teaching job as a visiting faculty member at the Centre for Development of Advanced Computing Training Center. This was in addition to her full-time academic role at the Indian Institute of Management Ahmedabad in western India. She had already shown herself to be a capable engineer at a large Indian manufacturing firm, and the teaching position offered a new challenge. But when the same courses came around a second time, she began to find the work monotonous. 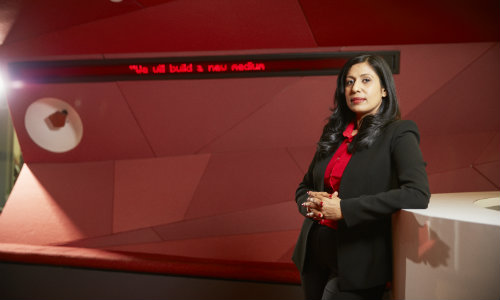 A colleague who had visited WPI suggested she consider applying to the school to get an advanced degree that would open up opportunities. Skeptical at first—she had no idea how she’d pay for more schooling, and she didn’t know a single person in the United States—Tyagi was swayed by WPI’s flexible programs and its focus on applied learning.

In August 2000 she boarded a plane for the very first time to make her way to Worcester. “I came to the United States with a semester’s tuition, three months of living expenses, and two bags,” she recalls. “One of the bags was stuffed with homemade snacks.”

Tyagi had chosen to pursue a master’s degree in information technology, but the timing could hardly have been worse. The industry was in the doldrums in 2000: tech companies were hemorrhaging cash, laying off employees, and working with skeletal staffs just to stay afloat.

Nonetheless, just weeks after arriving on campus, Tyagi dutifully visited WPI’s Career Fair, hoping to find opportunities in the flailing industry she would soon join. She had just started her coursework, but she felt confident that she had something to offer. 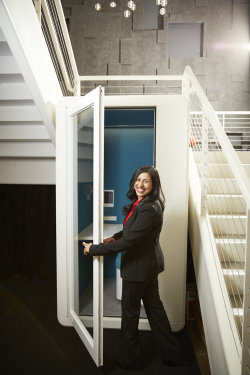 “I told [company reps at the fair] that I’d love to build an application that had been on their back burner,” she says.

“I’d use it as a project for my coursework and get real-world skills. And they’d get their project done for free.”

It was an irresistible pitch. Over the course of her two semesters at WPI, she ended up doing three industry projects, landed two internships, and had a full-time job offer in hand by graduation.

Tyagi took her academic coursework just as seriously, using the challenging feedback from her toughest professors as a chance to grow and learn.

“Professor Diane Strong made a lasting impact on me,” she says. “I remember thinking that an application I had built as part of a course would impress her, but then I was frustrated by her feedback. She consistently raised the bar for what I delivered.”

These experiences, which demanded that Tyagi expect more from herself and find possibilities even when it seemed few existed, proved valuable once she moved into the working world. First at a start-up, and then at IBM, she uncovered unexpected problems that she turned into solvable side projects with a big impact.

As an engineer at start-up NuGenesis, her first job after WPI, she learned about a federal regulation linked to electronic records that affected pharmaceutical and medical device companies. (In industry lingo, it had the not-quite-poetic moniker 21CFRP11.) Once she landed at IBM in 2003, she saw ways to use that knowledge to help her new employer. “As a side project, I started to customize and configure a set of more than 10 IBM software products that would meet requirements [for the regulation],” she says.

Within months, and with the blessing of her boss, she had created a poster presentation and developed a whitepaper with engineers several levels above her connected to the work. Her nights-and-weekends project had paid off.

She took a similar approach after accepting a job at Microsoft in 2008. While working on software technology known as “application virtualization,” she uncovered dozens of bugs hampering outside developers who were supporting the work. Despite her full-day meeting schedules, she found time to crack open the bugs for Microsoft’s engineering team to fix—and spearheaded the creation of a debugging guide that would make life easier for the developers going forward.

“A common theme of my work is addressing a deeply rooted customer pain point,” she says. “There are many low-hanging fruits in our workplace that we can pick based on our backgrounds and strengths,” she says.

While she took on these side projects because she was truly interested in solving the complex problems they presented, there were benefits well beyond the solutions themselves.

“These types of initiatives that started outside my day job,” she says, “eventually took over, and became turning points in my career that helped me land more opportunities.”

Today, as director of engineering at Audible, a company best known for its vast catalog of audiobooks, Tyagi continues to think beyond her job description. Since arriving in 2014, she’s tackled a range of projects. She led the launch of Audible’s mobile store worldwide, delivered a scalable platform for international expansion, shepherded its entry into the enterprise business, and built its customer relationship management and search traffic technology teams from the ground up.

Her colleagues, including director of product management Justin Kim, praise her skills as a collaborator and as an innovative thinker. 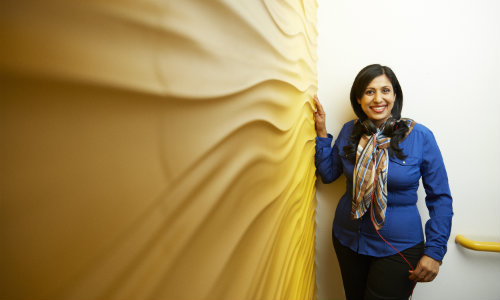 “Urvashi’s passion for this area is evident,” Kim says, “and she doesn’t hesitate to share her thoughts on [strategic] directions that go well beyond the boundaries of a traditional software development manager.”

These days, Tyagi is also working to solve a challenge that most of us know all too well: communicating with users at the right time, with the right message, and on their channel of preference. For example, we might like an Audible email reminding us to get the latest Dan Brown thriller but someone else may like a notification on their device reminding about a bestselling book that maybe doesn’t interest us. Building insights-powered communication campaigns that iteratively machine-learn users’ interests and preferences is as much an art as a technical challenge. She is working to solve the question that drives that problem: How do we engage them only in ways that are most meaningful to them?

If there’s anyone who can answer that riddle, it might just be Tyagi. And she might just do it on nights and weekends.

Solving an even bigger problem

Urvashi Tyagi has shown herself to be adept at tackling an array of technical issues, but she admits that one of the knotty problems she’d most like to unravel—increasing the numbers of women who enter and stay in tech fields—can’t be fixed by creating a better spreadsheet or a more perfect line of code.

She knows the issue intimately. Growing up in a relatively conservative Indian family, her parents came around slowly to the idea of allowing their daughters to pursue engineering degrees. (Eventually, she and all three of her sisters went on to study engineering.)

Years later, shortly before the birth of her first child in 2005, Tyagi found herself creating a spreadsheet to model whether it made sense financially for her to continue her tech career. Her mom ultimately persuaded her that staying the course in her career would have benefits both to her and her children. 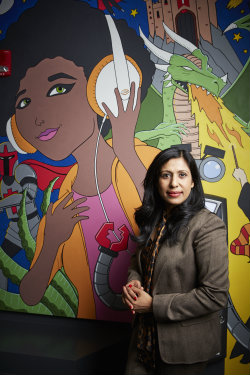 In each case, she was able to sidestep what experts recognize as two of the biggest landmines for women in tech, known informally as pipeline and retention challenges. In the first situation, she could have been nudged out of tech before she’d even started; in the second, her own fears might have been the obstacle in her path.

Tyagi wants to find ways to prevent both problems. That’s part of the reason she’s a tireless supporter of a variety of organizations and initiatives that help smooth the sometimes-rocky path for women in tech. She’s a strong advocate, for example, of Audible’s 20-week maternity leave that’s designed to help retain women who have children.

Outside her office, she serves on the Grace Hopper Scholarships committee, which supports the world’s largest gathering of women technologists. She’s been a panelist for Girls Who Code, a nonprofit organization designed to close technology’s gender gap. And she’s strongly connected to Illicit Mind, a New York City organization that supports diversity in technology.

Her partners in these ventures say she takes on these responsibilities with seriousness and heart. Georgie-Ann Getton-Mckoy, CEO and founder of Illicit Mind, says Tyagi routinely exceeds expectations. “After our Civic Hackathon last fall, Urvashi stayed well beyond the event to talk with the teams, answer questions, and give advice. She asked thought-provoking questions, and we all really appreciated the extra effort.”

For Tyagi, this work isn’t just about seeing more people like her in technology. It’s about making sure the best minds are at the table to make transformative technology possible.

Indeed, she speaks about the issue with problem-solving mentality that has marked all her very best work. “Technology has been an enormous enabler of economic development during the past two decades, and there are still many more problems to solve,” she says. “While this transformation is happening, I want to see women and minorities have a seat at the table. That way, the outcomes serve all of us.”