Impact Before and After Graduation

Five students reflect on their time at WPI, and on their plans for what’s next

Success looks different to different people, but one thing’s for sure—WPI graduates wear it well.

From a Fulbright scholar to someone who’s been part of the WPI community long before she was a student, meet some of the standout graduating students of 2019, and get a glimpse of what they’ll be setting their sights on next.

Crossing Country Lines with the Fulbright

It’s particularly fitting that Claire Dickson-Burke, who’s earned a double major in biology/biotechnology and international and global studies, graduated from a school with a German motto—as a Fulbright recipient, she’ll be traveling to Bavaria, Germany, to teach English and American culture. 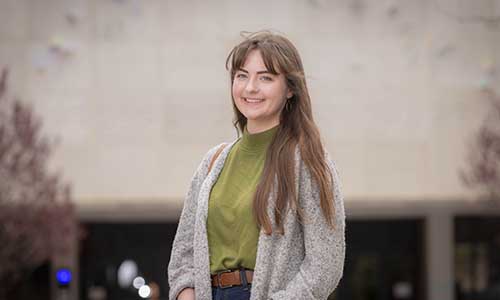 She had never considered the Fulbright as an option, but after professor of history Peter Hansen encouraged her to apply, she realized that it embodied one of the most important lessons she learned at WPI—following your passion while pushing yourself to try new things.

“It’s so important to challenge yourself and be outside your comfort zone,” she says. “I also believe there’s no one set path to a goal … I forged my own path to success with the topics that interested and challenged me.”

Dickson-Burke credits that success not only to Hansen and her Fulbright advisor, assistant teaching professor John Galante, but also to professors Tricia Stapleton (SSPS), Jill Rulfs (BB), and Pam Weathers (BB), whom she describes as “strong, successful, and supportive women mentors.” Thanks to them, she says she never felt like she didn’t belong in tech, and was able to consider various career options she never would have thought of herself.

She has big plans for her future, and the confidence and skills to achieve them. “As I leave WPI, I’m not afraid to chase after what I want,” she says. “I know I’ll face challenges in my life, but I feel confident that I will be able to overcome them.”

For graduating senior Harsh Rana, the 10,000-mile journey from home to WPI was supposed to meet his educational aspirations. He never realized how much his four years here would change his whole life—from the challenging courses that stretched his mind to the supportive safety net that helped him through personal tragedy. 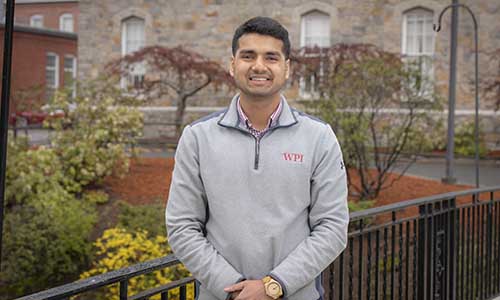 Right away the Insight program helped him meet new friends and relieved his fears about being accepted. “I was genuinely surprised at how nice people were,” he says. He was also surprised at the rigorous coursework, but didn’t quite know how to get help. That all changed when he took a course with his now-mentor, Foisie Business School professor Sharon Wulf. “I owe a lot of my success at WPI to her,” he says. “She has always been there for me.” As an informal and involved advisor, she has helped him navigate a change to a computer science major and urging him to get involved on campus.

He took her advice and joined a fraternity. In Tau Kappa Epsilon he held leadership roles and developed close bonds, strong enough to sustain him when his mother passed away during his junior year. During that time, he says, the community pulled him through. He appreciated WPI’s student-centered philosophy. “At no point did I feel that if I failed anything, that it was all over,” he says. “My professors gave me time to grieve. It’s not all about the education here, it’s about the student.”

Rana starts work as a global technology analyst with Bank of America in July and hopes to eventually use his computer science skills to help people with financial planning and retirement.

Experiencing Theory and Practice in a Project Setting

When Claire Danaher first sought out a graduate program that had a comprehensive data science (DS) education, WPI offered something other universities did not. 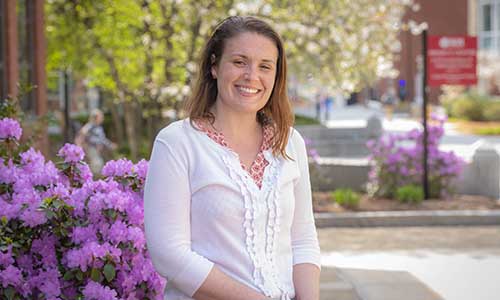 “The DS program at WPI is very special,” she says. “Since data science is such a buzz word these days, many colleges offer a degree or concentration in this field. But often the programs are modified outcrops of either purely computer science or a business program. The program at WPI is holistic and encourages students to build a solid foundation in the core areas of data science before advancing into more specialized areas.”

As a graduate student, Danaher experienced WPI’s long undergraduate tradition of project-based learning but with a graduate-level research project and expanded expectations. Her group worked on a sponsor-supported GQP (Graduate Qualifying Project) for Kronos that solved an authentic organization problem. The many layers of the project also helped her make valuable connections between her coursework and dilemmas she might encounter as a DS professional.

“The graduate experience at WPI is an opportunity to stretch the bounds of your preconceived capabilities,” she says. “It aptly prepares you to leave academia with an inquisitive mind and a strong work ethic.”

Danaher found applying her knowledge out of a classroom setting was a challenging, but exhilarating, preparation for her next step—a data science role near Denver. “I am someone who likes to dig into a challenge,” she says. “So I appreciated that as an institution WPI encourages students to stretch and take classes that may require a little extra leg work.”

The Other Side of Academia

Are you sure you can do this?

That’s what managing editor of the WPI Journal and grad student commencement speaker Doreen Manning thought about a lot of things: tackling a business degree at a STEM school, balancing work and academics, and, ultimately, speaking in front of her graduating class. 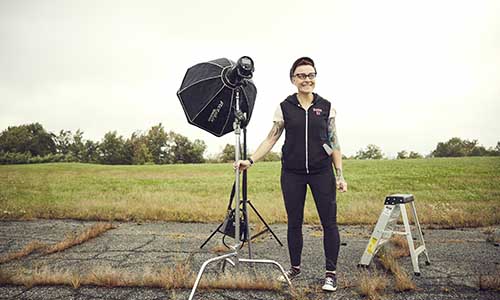 (Spoiler alert: she absolutely can.)

Whether she’s pushing past her introversion to audition for the role of student speaker while standing in front of a roller coaster at Disney World (“Instead of a cheering crowd, I had screaming coaster fans,” she says with a laugh) or using what she learned in the classroom to improve the Journal (“Opening my eyes to the other side of academia has made my work at the Journal deeper and more meaningful”), she has emerged a more confident student and employee.

Putting it simply, she says, “This MBA taught me to go beyond what is in front of me, and to think strategically about my work—and my role in it.”

Manning’s goals for the future are simple: to create. “I think I’ll always have a creative role to play—and as long as I can continue to craft that role in a way that brings me delight, allows me to be with my family, and sprinkles in some roller skating—I plan on doing what I do until I can’t do it anymore.”

For Christopher Nycz, everything is a learning experience. He’s staying close to the WPI community after graduating with a PhD in robotics engineering—he’s accepted a role as a research scientist to help establish and run WPI's PracticePoint facility for advancing healthcare cyber physical systems. 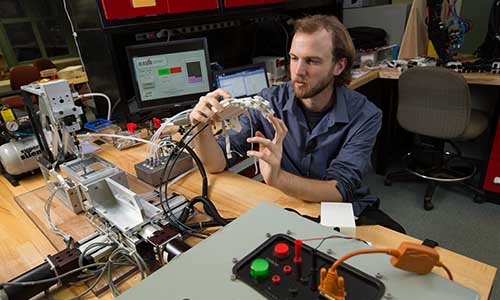 He cites a graduate experience that valued breadth more than a typical PhD program as essential to his success. “There was an emphasis on understanding potential applications of your research, and thinking about pathways to commercialization,” Nycz explains, a mindset he says will prove especially valuable in his new role.

Throughout his studies, he also learned how to focus on the problem he’s trying to solve instead of trying to match it with a solution. “It’s easy to come up with an idea and fall in love with it, even when further analysis keeps telling you that it might not be the success you originally thought,” he says, explaining that WPI taught him to move on from those ideas and instead let his understanding of the problem guide him to a solution.

What other plans does Nycz have for the future? Well, he’s not entirely sure, and that’s exactly how he wants it. “Five years ago, I wouldn’t have mentioned most of the best experiences I’ve had as goals,” he says. “I just want to work with a team of good people on an interesting project. If I can keep doing that, I’ll be happy.”

- By Julia Quinn-Szcesuil and Allison Racicot