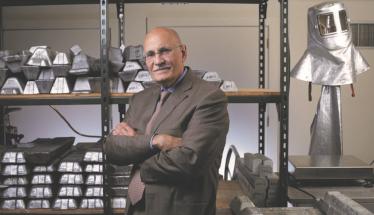 Curiosity, Desire, and Need to Innovate Guides Diran Apelian to Fellowship at National Academy of Inventors

Newest inductee has more than 700 publications, 15 books, and 21 patents

As he prepares for induction as a fellow of the National Academy of Inventors—another honor in a 40-year career as a professor, administrator, and cutting-edge researcher in materials science—Diran Apelian reflects on how his early years as an Armenian immigrant taught him the skills of creative adaptation and dealing with uncertain situations that have served him well throughout his life.

“I learned how to adapt very quickly, to be agile, and essentially to be comfortable being uncomfortable,” says Apelian. “It's a great preparation for life. 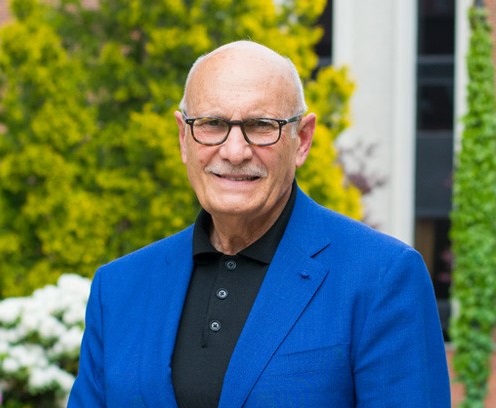 “What that did is really teach me how to think outside the box. I tend to look at things differently. Always have. I always ask the questions: ‘Why not? What could be?’”

That sense of the possible, the curiosity, desire, and need to innovate led Apelian to many accomplishments in the field of metal processing. He has over 700 publications to his credit, 15 books, and 21 patents. He has co-founded five start-up companies with students and colleagues. And, he has done pioneering work in the fields of molten metal processing, plasma processing, and spray casting and shape casting of aluminum.

Over the years, Apelian has recognized the convergence between industry needs and university research, and has developed some of those opportunities. Many of the industrial developments in shaped aluminum castings have been influenced by Apelian and his students. Lately, he also has been involved in critical work in developing technologies to recover and recycle materials to enhance a sustainable future. A decade ago, he envisioned the need for a center dedicated to materials recovery and reuse (recycling). He was the champion behind establishing WPI’s first National Science Foundation Industry/University Cooperative Research Center, the first such center to focus on recycling.

Apelian started his career in materials science by accident.

“I was taking advanced math in high school and I was just entering my senior year and I had no idea what I was going to go into,” he recalls. “My math teacher in high school, Mr. Nash, said the future is materials, and it sort of stuck in my head.”

It was the time of the great Space Race between the United States and the Soviet Union, and he and Nash would talk about how a spacecraft requires special materials to withstand the 3,000-degree heat of reentry.

“That sort of got my imagination,” he says. “I thought that was pretty cool. That's something I should do.”

He attended Drexel University, as its mandatory co-op program enabled him to fund his education, and he majored in metallurgical engineering.

“The journey started, and every chapter was more exciting than the previous one,” Apelian says. He realized the vast scope of the field and liked the idea that it wasn’t as narrowly focused as other pursuits.

“This is not something I could do without the university. It would be impossible. There's nothing that I've done or accomplished that has been done solely by myself. It's all about the teamwork and the students and the ecosystem of the Metal Processing Institute. I think the honor is really not just about me. It's about WPI.” -Diran Apelian

After Drexel he went to graduate school at MIT, earning his doctorate in 1972.

Apelian joined WPI in 1990 as provost, serving six years before heading into teaching and research. He is now the Alcoa-Howmet professor of mechanical engineering at WPI and the founder of the university’s Metal Processing Institute (MPI), supported by about 90 corporate partners, as well as private and government grants. He also directs the Advanced Casting Research Center, one of four centers within MPI.

Apelian is proud of the work his students have done through MPI. In 2016 and again in 2017 the Journal of the Society of Manufacturing Engineers chose Apelian’s students for its “30 Under 30” program, which recognizes the best and brightest students. And this year Forbes magazine selected one of his students, Aaron Birt, for its list of 30 people under 30 who are the best in manufacturing.

He also cites the university’s winning of the National Academy of Engineering’s Gordon Prize for Engineering Innovation in 2016, the Great Problems Seminars he has co-taught for first-year students over the past 10 years, and the Armenia Project Center he helped launch last summer with Michael Aghajanian as meaningful examples of the many stories that “illustrate how WPI has impacted me.”

The Inventors Academy recognizes academic inventors whose innovation has led to inventions that have improved the quality of life, economic development, or the welfare of society.

Apelian’s selection as a fellow of the academy is the latest in a line of accolades, which include membership in the prestigious National Academy of Engineering, a past presidency of The Minerals, Metals, and Materials Society (TMS), and awards such as the John Campbell Medal from the Institute of Cast Metals Engineers in the United Kingdom, the ASM Gold Medal, and the Audubon Society’s Joan Hodges Queneau Palladium Medal “for articulating an inspiring vision of sustainable stewardship of our earth’s resources.” WPI has awarded Apelian honors for outstanding research, scholarship, and teaching, and the Chairman’s Exemplary Faculty Prize.

He sees his induction into the Inventors Academy as a bit different from the others, however.

“These honors and recognitions are wonderful, but they don’t define what I do or how I conduct my life. The output of my work and the knowledge we create, the innovations we make and start-up companies we found, the graduate students who are now CEOs of companies or who gone on to other successes—those are much more meaningful to me on a personal level.” -Diran Apelian

He is excited about the new honor, but is quick to put this and the other honors in perspective.

“These honors and recognitions are wonderful, but they don’t define what I do or how I conduct my life,” he says. “The output of my work and the knowledge we create, the innovations we make and start-up companies we found, the graduate students who are now CEOs of companies or who gone on to other successes—those are much more meaningful to me on a personal level.”

Apelian is also emphatic about the important role that WPI has played in the current honor and the others that have come his way.

“This is not something I could do without the university,” he says. “It would be impossible.

“There's nothing that I've done or accomplished that has been done solely by myself. It's all about the teamwork and the students and the ecosystem of the Metal Processing Institute. I think the honor is really not just about me. It's about WPI.

“WPI is a place where we talk about our legacy and the foundations of the university’s theory and practice,” Apelian said. “But you know it's much more than just theory and practice. Theory and practice equals - you could write an Algebraic equation - equals impact. Making a difference or creating value and I think that is what we do at WPI.”

Former student Aaron Birt, now a professor of materials science and engineering at WPI, says Apelian’s guidance has a lasting impact on those who have benefited from his tutelage.

“As an advisor, mentor, and friend, Professor Apelian has guided me and so many other students to our current successes,” Birt says. “Because of his positive influence, you will find that his impact is not limited to any single dimension. Instead, his impact spans time and space as he raises each successive student to be outstanding, innovative, inventive, to pursue their dreams, and to continue positively impacting all those they meet.”

Apelian’s class of Inventors Academy inductees have nearly 6,000 patents among them, bringing the total number of patents among the academy’s 917 fellows to more than 32,000. The list of NAI fellows includes 100 presidents and senior leaders of research universities and nonprofit research institutes, 29 Nobel Laureates, and 36 inductees of the National Inventors Hall of Fame.

Apelian and his 2017 class will be inducted into the Inventors Academy on April 5 at the Mayflower Hotel, Autograph Collection, in Washington, D.C.