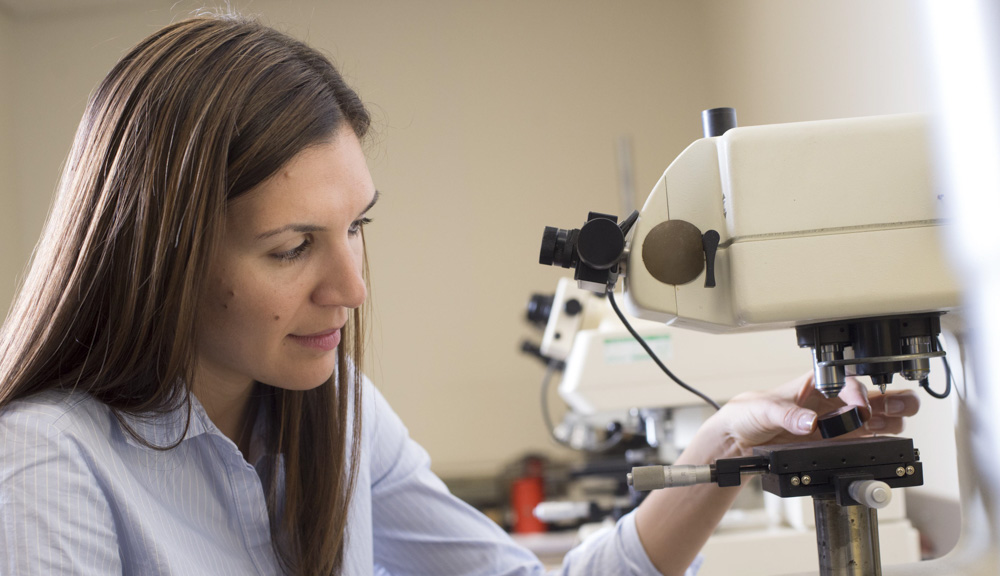 Danielle Belsito Cote is used to breaking barriers working in what is often a male-dominated field, so it is no surprise she was one of only seven women named to Heat Treat Today’s inaugural 40 Under 40, Class of 2018.

The group of up-and-coming talent are enthusiastic, forward-thinking, skilled professionals and significant contributors to the heat treatment industry––and part of the reason the future of the industry is bright, according to the publication. Heat treatment is the combination of heating and cooling processes used to alter the physical or chemical properties of materials, typically metals or alloys, in order to yield desirable characteristics.

Cote, director of WPI’s Center for Materials Processing Data and assistant research professor in Materials Science and Engineering, is recognized as a leader in developing thermal treatment processes for aluminum alloy powders. She is applying her cutting-edge work––which her colleagues say has changed the powder preparation processes of the cold spray industry––to additional additive manufacturing, or 3D printing, processes.

“Heat treatment is a niche field and doesn’t tend to get much recognition, so it’s exciting to be recognized,” Cote says. “Its reputation is that it is a dirty and dangerous field, but there are so many facets to this industry. My personal involvement in heat treatment is computational simulation-based––I don’t step foot in a heat treating lab. But computational interactions aren’t what comes to mind when you think of ‘heat treatment’.”

The daughter of a computer mainframe systems programmer and a retired environmental planner for the Massachusetts Department of Environmental Protection engineer, Cote says she was meticulous and curious as a child. “I played the flute and piccolo in high school and college and I wanted to major in music, but my parents suggested I look at other areas as well.”

At the University of New Hampshire, where her mother also attended graduate school, Cote, then with an undeclared major, said she “discovered science.”

“I was always good at science and math, but I didn’t know much about the engineering profession,” she said.

After graduating from UNH with a chemical engineering degree in 2005, she worked as a researcher at Saint-Gobain in the Northboro Research and Development Center in polymer science and data automation.

“I loved it so much I wanted to get an advanced degree in materials science,” Cote says. “I just wanted to know more about the materials I was working with.”

She continued working while she pursued a master’s degree at WPI, followed by a PhD fellowship, and joined the WPI faculty in 2016.

“A Great Mentor and Advisor”

“I nominated her because she is one of the top technical leaders in the U.S. in the thermal processing of metals and alloys,” he says. “She would qualify for the ‘five under 40’ recognition. She has clearly demonstrated her abilities with her important accomplishments in heat treating.”

Sisson adds that Cote is also a “great mentor and advisor,” overseeing a research group of six PhD students on thermal processes, along with two master's students and a handful of undergraduate research assistants, all while maintaining her own robust research portfolio.

"[Danielle] is one of the top technical leaders in the U.S. in the thermal processing of metals and alloys." -Richard D. Sisson Jr., who nominated Cote

She also manages a group of more than 40 PhD researchers across the U.S. for a multicenter project funded by the U.S. Army Research Laboratory. Taking a broad approach, the team––which includes nearly a dozen universities and national laboratories––is utilizing computational models and simulations, along with advanced characterization techniques, to guide research on improving the cold spray process for U.S. military applications, such as repair of military vehicle and aircraft parts.

PhD student Derek Tsaknopoulos says he began working with Cote as an undergraduate majoring in chemical engineering five years ago during the summer and that her approach to teaching helped prepare him for his PhD proposal. “As my advisor, Danielle was my go-to for everything the past four years. She gives me leeway on projects, encourages me, and gives me direction when I need it,” he says.

Kyle Fitzpatrick-Schmitt, a fellow PhD candidate who started working with Cote three years ago, calls her “an inspiration.”

“I like her hands-on approach to mentoring. She makes an effort to keep track with us,” she says, adding that Cote has inspired her to consider the academic track to become a professor at WPI.

This is music to Cote’s ears. “I want my students to see successful women in male-dominated fields as normal," she says, "and hope that all of my successes––this recent award included––help to normalize this goal.”