A Doll’s House, the Henrik Ibsen play about the metamorphosis of a stifled housewife, gets turned on its head in this week’s play put on by Masque and the Gender Equality Club. Tonight and tomorrow night’s productions present the play with its traditional story line but with one major exception. All the gender roles throughout the script are flipped. 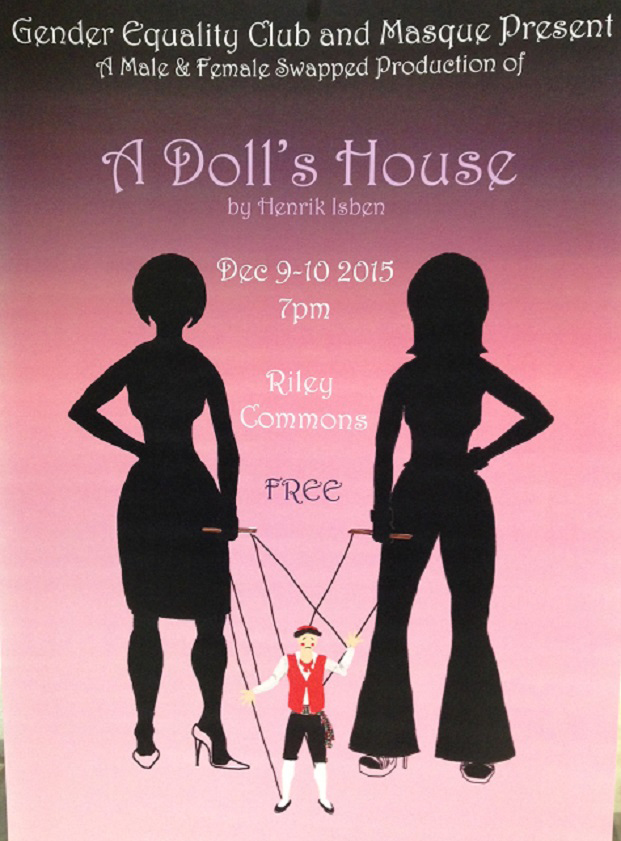 Dan Murray ’16, director of the play and president of the Gender Equality Club, says rather than just having women in men’s roles and men play women’s roles, they took the swap a step further. In this production of  A Doll’s House, each female role was cast as a male character and played by a male. So the female lead in the play, Nora Helmer, becomes Norfred Helmer and is played by a male, but recites the lines as they were meant for a woman.

With the play’s emphasis on gender inequality and Ibsen’s characters’ already slightly exaggerated gender norms, this flip made the new gender roles particularly poignant, says Murray. “It’s interesting because something like the female roles, which you don’t always think of when you are acting or directing, often are played as more timid or more gentle,” he says. “They had to be stern and forceful and the men had to sort of tiptoe so they don’t anger the females.”

As for the actors, he says, it was sometimes difficult to inhabit a character of the opposite sex. “It’s tricky because when a male actor is playing a male part, he draws on experiences in his own life,” says Murray. When he is playing a female, he doesn’t have that first-hand knowledge of genuine reactions.

Topics
Arts & Sciences
DEPARTMENT(S)
School of Arts & Sciences
Lots of the inequality we see has been deliberately put in place, but a lot of it is just things people do in their lives that perpetuate gender roles.

Murray recalls one of the female actors who was trying to be intimidating and so she thought of a person from her past she really didn’t like. The effect was more of an angry teenager than an intimidating man. So the actors then stretched to base the scenes that were less familiar to their own experiences on characters of the opposite sex in popular culture who might be showing those emotions.

And while the audience could giggle at what might seem ridiculous when the genders are flipped, that’s where Murray hopes people register the gender inequalities that are often ingrained in everyday experiences. One small but telling scene had Norfred taking out a loan his mother has to sign for. In the original play, with a young woman needing her father’s signature, the audience might not have found that as starkly unequal as it looks in this version. In another scene a misogynistic male character in the original play becomes a female character overtly hostile to men and it is especially jarring.

Murray hopes audience members can leave the play mulling over the very backwards presentation of gender roles. “Lots of the inequality we see has been deliberately put in place,” says Murray, “but a lot of it is just things people do in their lives that perpetuate gender roles. Lots of times you just don’t think about it.”

With a growing list of potential plays to follow using this method of flipping  gender roles, Murray hopes this type of production can become a semi-annual or an annual event.