Enemy of the People

An Enemy of The People opens this evening 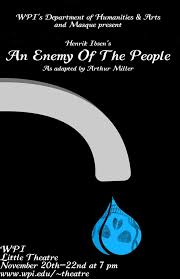 Talking about the upcoming Masque production, director Nicolas Hewgley ’15 says An Enemy of the People was selected because of its timeless moral. “The truth is constant and unwavering. The show tells the story of one man, Dr. Thomas Stockmann [the town’s physician], who sticks to that truth. When the majority turns against the truth, we the audience see the implications of the majority overpowering the truth.”

The setting is a small town in Norway, which is beginning to prosper through its medicinal spring waters. Happy days grow dark when Dr. Stockmann reports that the wellspring of their wealth has been contaminated.

Dolan Murvihill ’15 portrays Dr. Stockmann. “When he begins to advocate for making repairs to the situation, he meets resistance from his brother Peter, chairman of the board for the springs and mayor of the town. Peter turns public opinion against Dr. Stockmann and the good doctor finds himself alone, labeled an enemy of the very people he fought to protect, searching for the resolve to carry on.”

Who: WPI’s Department of Humanities & Arts and Masque

What: An Enemy of the People by Henrik Ibsen, adapted by Arthur Miller

Reservations can be made at http://users.wpi.edu/~theatre/

Murvihill, a computer science major, says Dr. Stockmann is “a deeply flawed person, and that makes him a fascinating and difficult character. Even though he has ironclad scientific proof that he is right, Dr. Stockmann has all the political instinct of a cauliflower. Seeing the moral high ground fail so utterly against his brother’s raw charisma shakes him to his core.”

An Enemy of the People was written by Henrik Ibsen, considered the father of modern theatre. The Norwegian-born playwright completely shook up the 19th century theatre world with his stark, unvarnished look at reality. Plays such as An Enemy of the People, written late in his career, were seen as scandalous attacks on the social mores of the day.

Ibsen met his match in Arthur Miller, one of the most critically acclaimed American playwrights of the 20th Century, who has given the classic a decidedly different take. An Enemy of the People was written in 1882 and adapted by Miller in 1950. According to theatre critic Michael Billington, there are two basic ways of looking at Ibsen’s Dr. Stockmann: “You can, as Arthur Miller did in his softened version, see him as a heroic idealist confronting small-town corruption. Or you can, as playwright Christopher Hampton does in this far superior translation, portray him warts and all—as a mixture of instinctive truth-teller and wild extremist who, when his scientific findings are rejected by the town, famously argues, ‘the minority is always right.’”

Hewgley is an HUA major with a concentration in drama and theatre. Although this is his first time directing a full length production with Masque, Hewgley is no stranger to the art. Throughout his four years at WPI, he has directed twice for Masque and has assistant directed three musicals with VOX.

Asked if An Enemy of the People presented specific challenges, Hewgley says, “The problems I had adapting this show were actually very small. I had the distinct advantage of having a dramaturg for this production, Casey Broslawski [’17]. He has been instrumental in giving information on the background of the show, including the playwright. Adapting the show to a timeless period after having that information was very easy.”