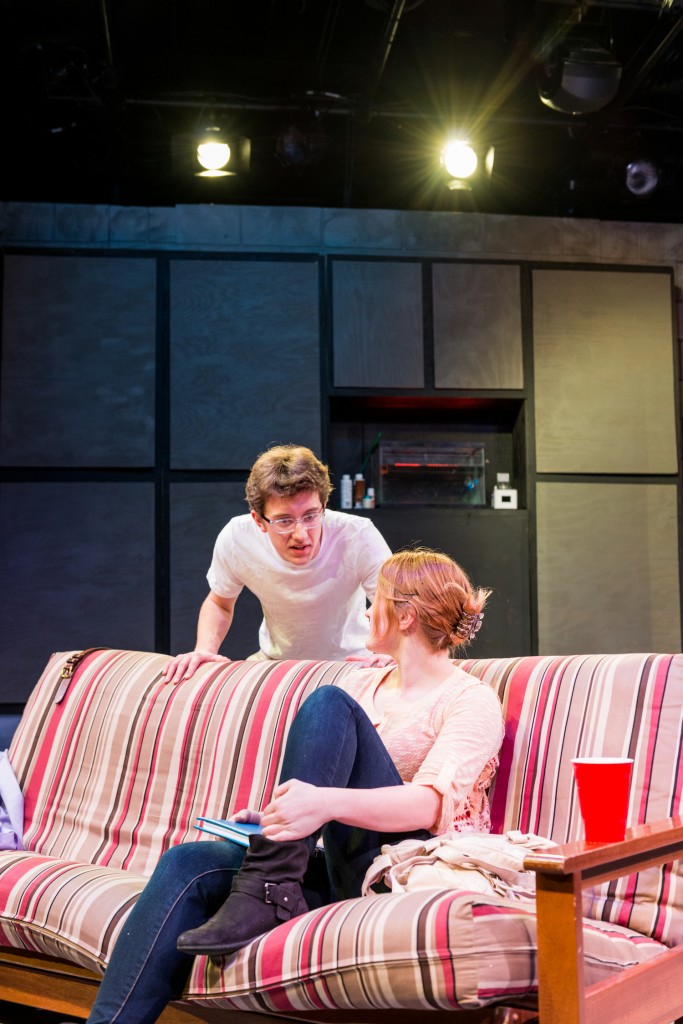 This weekend, Masque and the Department of Humanities and Arts present boom, by Peter Sinn Nachtrieb, in the Little Theatre. Masque’s C-Term show is directed by Lena Pafumi ’15 and produced by Joseph Brown ’15.

Nachtrieb’s three-character play centers on Jo, a female journalism student, and Jules, a male marine biologist. The two meet through an online ad for a “casual encounter” in a subterranean biology lab. But there’s nothing casual whatsoever about this particular evening.

Will Jules’s intent to procreate and save humanity succeed? What’s going on in the fish tank? And who is that woman, Barbara, pulling levers in the corner? Something is about to explode!

Pafumi says, “Despite show’s famous tagline, ‘Sex to Change the Course of the World!,’ it’s about so much more than that. It’s about fate and whether or not you can choose your own destiny. It’s about survival and change. It’s about life as we know it.”

She adds that she chose the play “because it’s different from any play we’ve had a WPI in a while. It’s a comedy but it is also deep and uplifting. I hope that this production will cause the WPI community to grip their seats in disbelief, smile with hope, and to burst into wild laughter. I think this show causes us all to think a little bit more about who we are, and why we are here.”

Nachtrieb is currently Playwright in Residence at Z Space in San Francisco, funded by the Andrew W. Mellon Foundation. His comedy Bob: A Life in Five Acts was performed in the Little Theatre in the summer of 2012, by WPI’s Sunburns Theatre Company.

Warning: This show contains inappropriate language and gestures as well as strobe lighting effects. This show is not suitable for anyone under the age of 17.

Tickets: $5 — can be reserved through the Reservation Kiosk.

Wondering how to find the Little Theatre?