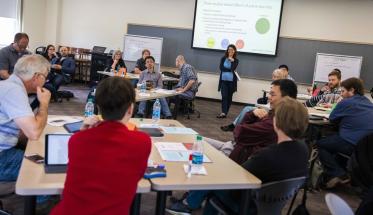 Student learning and real-world experiences lie at the heart of WPI’s project-based learning model. To help students get the best education possible, WPI is committed to ensuring that faculty teaching is also of the highest caliber; since 1995, the university has helped faculty—accomplished researchers and recognized experts in their fields—become brilliant teachers, too.

In many ways, the work the Morgan Teaching and Learning Center has done with WPI’s faculty over the years helped the university community successfully pivot during the pandemic. Technical assistance in March 2020 from WPI’s Academic Technology Center (ATC) made it possible for faculty to immediately move their courses online. Once it was clear that the pandemic would disrupt the 2020–21 academic year as well, the Morgan Center partnered with ATC to support more than 200 faculty members in redesigning their fall courses to be more effective when taught online and in a hybrid capacity.

Now, the Morgan Center is again fostering faculty growth—this time in the form of introspection.

Chrys Demetry, director of the Morgan Center and professor in the Department of Mechanical and Materials Engineering, has begun sharing with WPI faculty strategies for weaving student well-being into syllabi and course design. The techniques are compiled in a short self-paced online course created by ATC’s Senior Instructional Designer Caitlin Keller, who works closely with the Morgan Center. Many of the strategies are rooted in peer-reviewed research studies as well as sociologist Pierre Bourdieu’s theory of cultural capital. The syllabus sections highlight actual language that members of WPI’s faculty use in their course materials.

Demetry says she hopes this decentralized method helps “people to see the ranges of approaches that our faculty use—not to label something as the best way, but to open our minds to different approaches and create conversation around that.”

The idea behind using an accessible, learner-centered syllabus is to let students know that learning is a partnership rather than a top-down edict. Ideally this will motivate students, but it should also help them understand that it’s okay to ask for support when they need it.

In this segment from the syllabus for Social Science Research for the IQP, for example, Professor Rick Vaz doesn’t declare a zero-tolerance late-work policy but rather explains why it’s important for students to keep up with assignments: “I encourage you to meet each deadline, but late work will be accepted. Projects have unexpected twists and turns. On the other hand, falling behind can create difficulty for your team and compromise your ability to develop a solid plan for your project. Please let me know if your team needs more time for a particular assignment.”

Some of our faculty are taking what they’ve seen in the pandemic and through the mental health crises and are really trying to reframe the focus on learning, growth, and holistic well-being.

And in the following segment from the syllabus for Topics in Law, Justice, and American Society, Assistant Professor of Teaching Lindsay Davis makes a point to tell students not only when but why she holds office hours, since research increasingly shows that students often don’t understand why they would meet with their professors one-on-one outside of class: “Office hours are times when you can come to discuss class materials, readings, or questions. You might attend office hours to seek extra help, clarification of material presented in class, explanation of assignments, and/or follow up on aspects of the class you find compelling. We can also discuss majors, minors, and programs of study, the HUA requirement, internships, graduate school, campus events, and so on. Or just stop in to say hi!”

While faculty have to opt in to take the Morgan Center’s online course, they have multiple opportunities to do so. Demetry and her colleagues link to the inclusive syllabus Canvas site in most Morgan Center communications. In addition, the syllabus resources are being integrated into the Center’s core programs, including the Faculty On-Ramp to Teaching, Project Advising 101, and New Faculty Orientation.

Not only are faculty taking the inclusive syllabus course, they’re also sharing with other colleagues the ideas and resources highlighted in it. And some faculty—including Hermine Vedogbeton, assistant research professor in the Department of Social Science and Policy Studies—are using what they’ve learned to restructure their own syllabi and courses.

When Vedogbeton first saw the Morgan Center’s syllabus resources, she heard echoes of the interdisciplinary study she has been conducting into Black students’ experiences at WPI. Data that she and her colleagues collected in that study (which they expect to publish after the study ends in 2024), shows that Black students often feel excluded from course teamwork. After doing some additional research into diversity, inclusion, and team dynamics—and meeting with staff at the SWEET (Supporting WPI through Effective and Equitable Teamwork) Center—Vedogbeton began adjusting how she introduces and implements group projects in her courses.

One step is adding a statement about teamwork and collaboration to her syllabi. Vedogbeton adopted that statement from the Morgan Center’s resources, which draw on the SWEET Center’s work helping students identify biases and other issues that arise in project team dynamics. The language Vedogbeton now uses in her syllabi explains that stereotypes about race, gender, and nationality often lead teams to divide up tasks unfairly and unevenly. As a result, individuals from groups traditionally underrepresented in STEM (including women and people of color) tend to be excluded from central roles like designing the study and carrying out the methodology. Instead, those groups often end up taking notes and doing other ancillary tasks.

It’s about caring for students’ well-being rather than just wanting them to learn what you’re teaching.

“Since WPI is a project-based learning school, we have to make sure that all our students benefit from both theory and practice,” Vedogbeton says. “That’s why it’s important for all students to get actively involved in projects. Mastering those skills will affect the type of jobs they find later and how successful they will be.”

She notes, though, that simply including a teamwork statement in the syllabus is not enough. It’s also important to follow up directly with students to ensure that they are engaged actively in group projects and feel like their contributions are valued. “That combined approach changes the group dynamic,” Vedogbeton says. “Students report paying more attention to how they share the work and how they talk to their peers.”

While the kind of active involvement Vedogbeton suggests certainly requires more from faculty, she thinks the benefits to individual students and the wider community—both on campus and out in the world—are well worth the additional time and effort. “It’s about caring for students’ well-being rather than just wanting them to learn what you’re teaching,” she says.

This kind of big-picture faculty introspection may be part of a broader trend in higher education. Stanford University released a study in October 2022 identifying how, in addition to the many well-documented detriments of online learning during COVID-19, one important improvement was increased empathy between faculty and students. In addition, the new book Acute Crisis Leadership in Higher Education compiles reflections from educators and administrators around the country about how their institutions handled the earliest days of COVID and how those experiences might help them better prepare for the next crisis.

“Some of our faculty are taking what they’ve seen in the pandemic and through the mental health crises and are really trying to reframe the focus on learning, growth, and holistic well-being,” explains Demetry.

And as faculty share their teaching experiences with one another, the bonds between faculty are also growing stronger. Demetry calls the current tactic “faculty development by connecting with colleagues,” and says it’s empowering to see faculty members acknowledge that there’s still a lot they each have to learn. “By collaborating and building connections on campus with other faculty and staff, faculty are finding a lot of encouragement to develop their own teaching methods.”

That kind of genuine, multilayered collaboration among faculty also provides a valuable lesson for students: Learning is a lifelong activity.